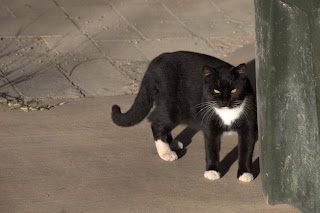 I awakened Sunday morning to beautiful West Texas warm temperatures. I went outside barefooted in my pjs to meet Chicago--Chet's favorite cat. 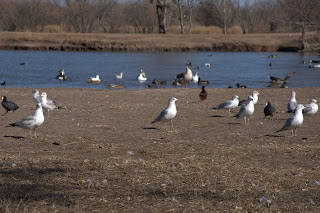 I headed into town and made a stop by Lake Nelson, behind my old house. One of my favorite things to do whilst living next to the park was to walk over and feed the ducks, gulls, and geese who lived there. They all remembered me and came walking up, but were quite disappointed that I had nothing to feed them. :( 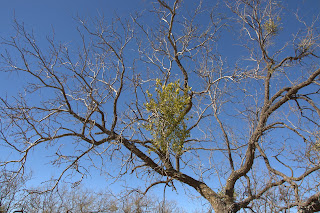 And what would West Texas be without mesquite trees full of mistletoe? 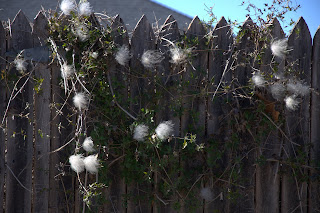 I did a double take driving down the park road. What? Goose's toilet paper in West Texas? Actually, I think here we called this vine that grows all over fences--usually barbed wire fences--"Grandpa's whiskers."

I made all my usual haunts in town--it looks lonesome and empty. My old street looks terrible, and I could not find Gigi's old house on Peach. The address was right, but they appear to have remodeled so it does not look like the same house to me. What's up with that? I drove up to Hardin-Simmons and through the campus. It is still a pretty campus, but cannot hold a candle to Ole Miss, who just won the National Landscape Award for the prettiest, best-kept campus in the nation, and an award for our efforts at becoming a Green Campus, including tree preservation. :)

On up Ambler, and I stopped for lunch at Los Arcos, my favorite neighborhood Mexican restaurant. I had my old favorite, the guacamole enchiladas and a big ole iced tea. They have enlarged and remodeled, but I kind of preferred the old hole in the wall it was before.

A little further out Ambler, and shades of civil disobedience! 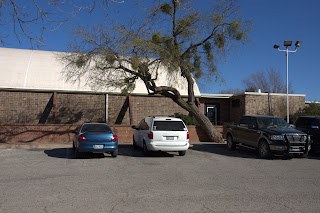 This is the gym that Jane aka Gigi and I occupied one night with about 200 Hispanic families (from grandparents and elders down to babes in arms) as we stood with the community to protest the city's demolition of part of their community block grant funded community center. The community said "No way" to the city's plans to demolish part of the center that people in the community helped to build (literally doing the construction) in order to make way for a private-for-profit business serving a clientele of white kids from the suburbs while the neighborhood children were tossed outside instead of able to use the gym for their afterschool program. Gigi had been waiting for years to chain herself to something, and had her chance. :)

BTW, we were successful at stopping the demolition and were part of the community's development of ACCESS, the Abilene Child Centered Educational Support System, where Jane and I served on the founding board and had many opportunities to work with the community and our amigos, Billy, Joel, Olivia, and others. They even took me with them to see Little Joe y La Familia--one of my life long dreams.

Then, off to potluck with my friends. I made a middle-eastern themed dinner. I wanted lamb, but alas, there was none to be found on a Sunday afternoon. I might add the wine selection on a Sunday was none too promising, either, but at least in Texas you can buy wine on a Sunday, unlike Mississippi. However, as always when in Texas, I buy Llano Estacado, which is actually a quite decent wine. 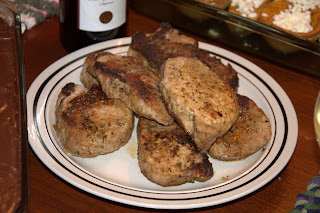 Cumin crusted pork in white wine. Judy brought the Killer ribs, per my pleading. Somehow the picture of the ribs did not turn out, but they were delicious, falling off the bone, finger-licking good. 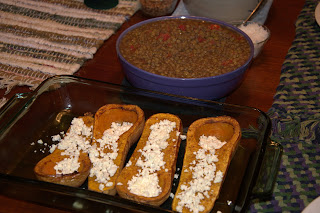 Sherri's job was to put the feta on the butternut (with olive oil and cumin) after it baked. Judy also saved me on the lentils, as I forgot the tomatoes while at the store. She had some in the pantry and brought them after my frantic last second phone call.

Sherri brought a beautiful fruit salad with pecans and coconut, and Karen topped the charts with a chocolate cake. 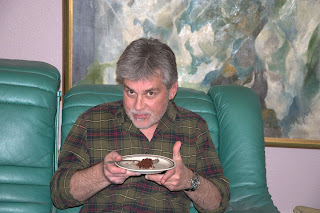 The gang was not all here, obviously, but it was still a beautiful spread in our friend's beautiful home. 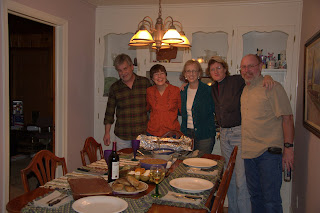 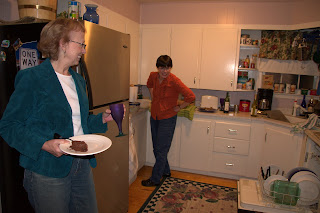 After dinner, we all called Gigi and had a "sit around the phone" visit. Then I walked into the kitchen and said, "What a mess!" Sherri turned around and said, "Hey, wait a minute, the only thing in here is me!"

It was great to be back for a visit again, with the people I love. Now, off to Graham to see my folks there and then after a stop in Arlington for one more friend visit, back to rainy and cold Mississippi for Christmas with my son, husband, and dogs. Sounds like a great place to be.
Posted by Suzassippi at 12:01 PM

Thanks for calling--it was great to hear everyone's voices! Loved the trip down memory lane, too! Can't believe my old house was unrecognizable. :(

Ahh, Abilene. I'm glad you had fun in good ole' West Texas....though, now that I live in Lubbock I've discovered the truth about Abilene. Abilene is not truly West Texas, it simply sits on the border between central and west. You have to come out a little further until you reach the spots where the dust blows so hard you can't see an inch in front of you....in that unusual place you discover a little part of earth called West Texas with a high level of pride by those who live out in these crazy parts.
But, ahhhh, the good days back in Abilene before I knew that wind like this actually exists in the world :)

True. The day I moved to Lubbock the dust was blowing so hard I could not see. In the next second it began to rain & I had mud on my windshield. I would hit the caprock & get depressed. I moved back to the Abilene version of west Texas. :)