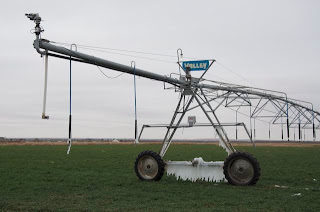 I left Abilene Tuesday afternoon to drive the 100 miles to my folks' house in Graham--a little town near Possum Kingdom Lake.  Driving north out of town, I noticed an irrigation sprinkler that had iced with the cold temperatures of the last few days. 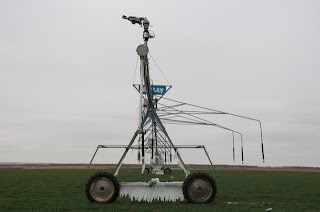 Irrigation in West Texas is essential, even in winter. 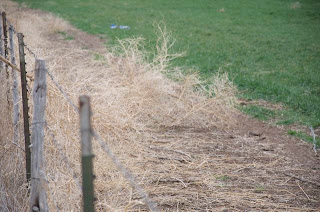 Just as I was heading back to the truck, something caught my eye--yep, a Texas tumbleweed blowing across the field.  A number of them were caught up against the fence as usual. 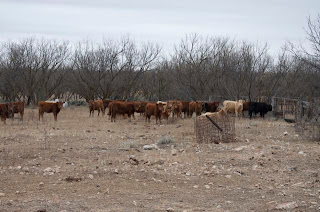 A sight I have not seen in a while: cattle at the winter feeder. 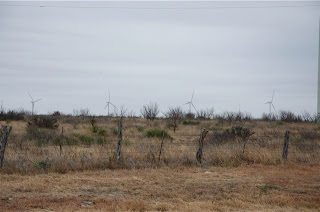 As I topped the hill out of town and heading toward Albany, I was struck by a new site.  Hundreds and hundreds of wind generators.  I had heard a wind farm had been established.  It had--like many things do--divided the community in terms of wanting it and not wanting it. 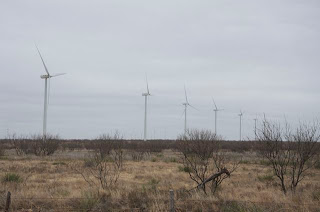 The further I drove, the more eerie the scene, yet strangely beautiful at the same time.  It was like something out of a science fiction movie:  just row after row, cluster after cluster of windmills, each slowly turning.  It was both somewhat frightening, and yet, the technology, the clean lines, and the symmetry of the blades was mesmerizing. 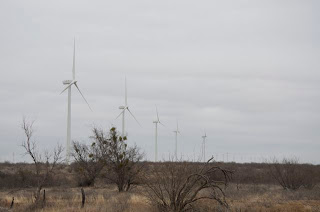 The idea that all that wind that blows so freely out here could be put to use to generate electricity was mind boggling. 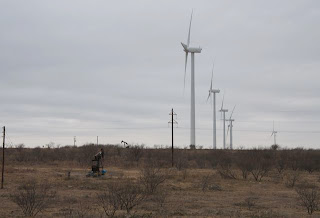 And finally, the incongruity of the oil pumpjack, pumping crude into a pipeline going to who knows where across how much land, in the shadow of the clean energy wind generators.
I cruised on into Graham, unable to get the images of acre after acre of windmills lined up across the gently rolling pastures of the ranches out of my mind.
Posted by Suzassippi at 9:59 PM

I love the wind generators. There were a whole bunch of them between Abilene and Amarillo when I was still living in West Texas. They do seem so odd in all that Oil Country. Sorta like the old days v. the new all along the highway. We have a few small ones here that individual people have installed on their property and there's a big one out on Nikolski that got put up and then promptly burned out the motor or something so it is not working.

These photos certainly bring back memories!