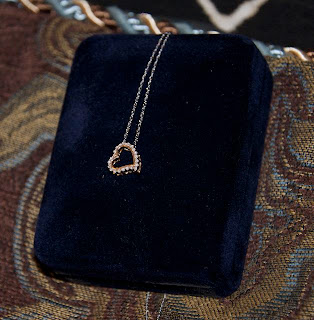 Randy is the most unromantic guy I have ever known.  Not one for sentimental cards, gifts, flowers, etc.  Yesterday morning when I got out of the shower, the new Bruce Springsteen album was playing on my iTunes.  He took me to lunch at Nogoyo's Japanese restaurant--a lovely new place with wonderful ambience that is quite popular and was crowded even at lunch on Saturday.  Afterwards, we went shoe shopping next door for athletic shoes--woo hoo.  Okay, so that's not that romantic, except it was kind of fun.
He planned to grill steaks for dinner, but alas, there was a rib-eye run at the meat market...and a T-bone run...and sirloin run...so we ended up with tilapia and shrimp--probably much more heart healthy anyway.
And speaking of hearts, I reached to the table to pick up my wine glass and noted a black box where there had not previously been one.  What a surprise--and all of this from the most unromantic guy I have ever known--who scoffs at Valentine's day, Mother's day, and basically any day in which one is "expected" to purchase a gift for someone because it is a declared "special" day--declared special by the retailers and marketing industry, that is.
I must say, it was all a nice surprise anyway and a splendid day.
Posted by Suzassippi at 12:25 PM

Beautiful necklace! He does have a romantic side!!

Yes, he totally surprised me all day long. Wonder what's up with that? Must be because he wants that Alaskan cruise this summer. :) Or maybe it was my buying him the jacuzzi he wanted.

Glad to hear you are all doing well. Loved your necklace. I also received a heart necklace from the second most unromantic guy.

Hey, good to hear from you, too, HD! Hope all is well in the great west.