When the old motorcycle is not good enough... 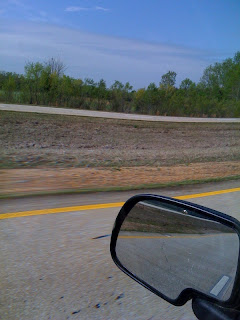 I'm guessing Rando was pretty bored on his way to Memphis this morning to test ride a new motorcycle.  I do have to admit to being impressed with this iPhone photo out his window--he was in his truck, not on a motorcycle whilst doing this.  Shortly after his emailing me the photo on his iPhone, the motorcycle ring tone on mine went off.  (Yep, that means it is Rando).
"What is your social security number?"  Another hour later and it rings again: "Can you bring me my motorcycle?"  Of course, since neither J nor I ride, and he was in the truck, that was just a little back door way of saying, "Yes, I bought a new one." :)  So, he is on his way home and since the thunderstorms are coming any time now, he will have to do the actual trade and pick up tomorrow or later in the week.
There used to be a running joke with my friends and me that every time I took a trip, Randy bought something: first, it was a digital camera; then it was a new computer; then it was another new digital camera, and so on.  I have not been anywhere except work or out to feed my friend's dogs, and he thinks he deserves a motorcycle?  LOL  I guess taking off work for the last two days and using vacation time to install a new microwave/convection oven and replace the bathroom floor that J and I unsuccessfully attempted to replace in December is a reason to celebrate with a new Harley.
Maybe by next December, we will actually have the whirlpool tub (currently sitting in J's floor as that had the only doors large enough to get it through) installed, and the shower and surround installed.  My next major task, once the tub is in, is to get the tile laid on the floor so we can put a toilet back in and install the new sink.  We have managed with only one shower since December quite satisfactorily, but the idea of all of us using one toilet--which is located in the master bedroom--is a call for action.
Posted by Suzassippi at 2:19 PM

Wow, if you left town, what would he get next?! LOL Just kidding. Some day all of your bathroom issues will be over. :)

Technically, motorcycles do not constitute a purchase, they fall under the Title 17, Section 3 exclusion rules, so your proper course of action is to tactfully ignore the maniacal grin he'll be wearing for the next month. Thankfully, jewelry falls under the same exclusion, as does travel, so you do have options available . . . .

Okay, you will have to enlighten me on title 17, section 3. :) I say the same thing to him that I always say when he says he wants a new 'something': "okay." It's worked out really well for us for almost 28 years.

wow. I can't wait to see the new motorcycle. what will you do when ou do not have bathroom issues? Just think of finally sitting in the hot tub. :o)

Oh, we are still a long ways from the tub...Randy decided he better put the old toilet back in since we were not going to finish this weekend and did not want a week with one toilet! Some days I fear it will never be over :)

Besides the lovely Goldfish, you may indeed be the best wife ever . . . Rando is a lucky man!

I do have to remind him of that occasionally. :)