It's Sunday: Let's go to church 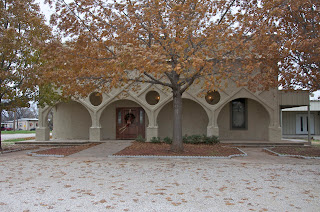 The Newcastle Methodist Church was established in 1908 in the lumberyard.  Sometime during the 1940s, this building was constructed.  Dad said it was first wood, and in later years was stuccoed.  Rufe Helm, a local man, was instrumental in the building of the church.  It appears to be built in a Spanish Colonial Revival or Mission Revival style, evidenced by the plaster/stucco finish, flat roof, arches, and the thick, building-long exterior arcade on the front.  The church has been altered to have only one front door, and the addition of the stained glass window to the right.  The original building (the one in which I was baptized as a child and attended Sunday School) had two front doors.  I do not recall any windows on the front of the church, though there may have been some.  The original stained glass were also typical of the era, depicting various Biblical scenes. 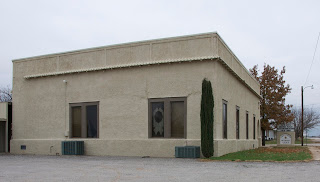 My dad was the Sunday School Superintendent and when it was time for Sunday School to dismiss, he would tap the piano keys a few times to signal dismissal for church.  We moved from Newcastle when I was 7, but summers with my Grandma meant back here for Vacation Bible School and Sunday School.  I recall one year that the project in VBS was making a rooster by gluing seeds, corn, and beans onto a board with a rooster pattern on it.  One night after we went home, my sister and I awoke in the middle of the night to a noise.  A mouse was happily gnawing on the corn on the rooster plaque, and the next morning, our rooster was minus quite a few tail feathers.  The Proffitt Methodist Church, a long slender wooden building, was moved into Newcastle and serves as the Fellowship Hall.  It is unrecognizable with its metal siding. 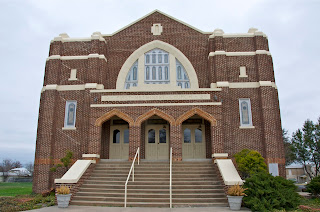 In neighboring Throckmorton County, the Throckmorton Methodist Church evidences something of a Moroccan style.  It is a very elegant building, albeit, one about which I can find nothing.  It was built in 1929 according to the date over the front doors.  The cornerstone indicates the architect was William C. Meador and the building contractor was E. A. Birchitt. 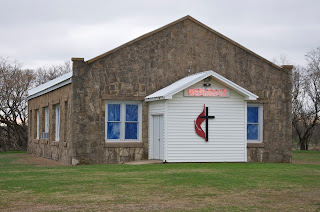 The Elbert Methodist Church:  11% of the population in the area are adherents to the Methodist faith.  Given that the total population of Elbert is only slightly over 100 these days, that translates to not very many possible members.  I was always fascinated by those blue windows as a child.  I don't recall every attending services here, since Mama and Papa were Baptists.  We did go to a few revivals that were held in the open-walled tabernacle next door.  I think the wooden entrance hall was added some years later, and I do not recall it as a child.  I always thought it interesting that the Methodist Church was so plain, compared to the Baptist Church next door. I'll be posting the area Baptist Churches tomorrow.
Posted by Suzassippi at 11:33 AM