Back to Texas and 50s service stations 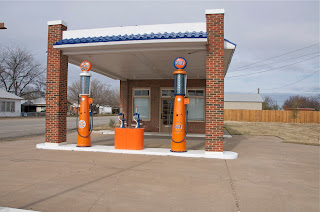 It's time for a little nostalgia break after a week of work in Mound Bayou with the students!  On my recent December trip through several Texas counties, I noticed that the old Gulf service station in Albany has been restored.  This station sits on the corner of the road from Throckmorton and Seymour--a road I traveled many times as a child.  The pumps in the center of the island were for kerosene. 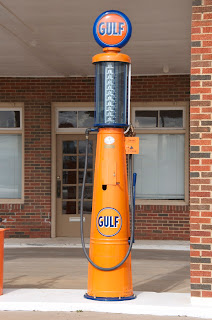 These pumps worked on a gravity system, and I remember my grandmother getting gas from this type of pump at the service station in Elbert. 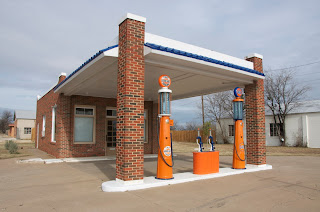 My cousins lived in Abilene and we lived in Seymour, so we often made a pit stop in Albany on our way to and from Seymour to see family in Abilene.  The Gulf Oil Corporation was named for its location on the Gulf of Mexico, Port Arthur, Texas.  The company that would eventually be named Gulf Oil in 1907 was founded by the Mellon banking business of Pennsylvania after oils was discovered at Spindletop near Beaumont.  One of their mid-60s No-Nox gasoline promotions featured a horse kicking, leaving two horseshoe imprints, and the company gave away adhesive orange plastic horseshoes as a promotional gimmick.  I once saw a car with two of the horseshoes affixed to a dent in their fender panel. 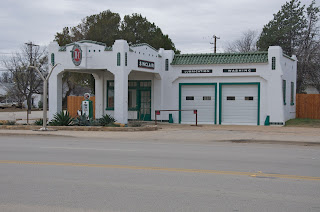 Also in Albany is the restored Sinclair station on main street, heading toward Abilene.  Sinclair was founded in New York in 1916 by Harry F. Sinclair.  Our first "courtesy card" was for Sinclair when my parents traded at the station in Seymour.  Sinclair's distinctive dinosaur logo was added after the Chicago World's Fair in 1933-34.  Sinclair sponsored a dinosaur exhibit, linking the petroleum industry to dinosaurs, and it was so popular that the company began a toy dinosaur promotional give-away and added the dinosaur silhouette to the sign. 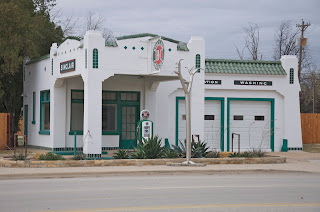 This station features a southwestern spanish design that was very common in the Texas-New Mexico area where I grew up.
Posted by Suzassippi at 1:12 PM