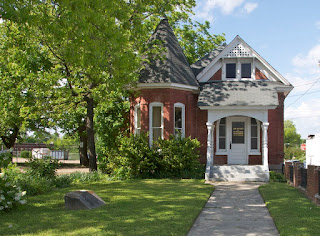 Although the Oxford Convention and Visitors Bureau calls the Sullivan, Stone, and Freeland Law Office


...Victorian Gothic...thought to be the oldest law office structure in Mississippi...built prior to the Civil war...

the Mississippi Department of Archives and History, Historic Resources Inventory lists it as circa 1870, Queen Anne, Second Empire.  Victorian includes Gothic, Queen Anne, and Second Empire, all of which are part of the broad term Victorian.  The oldest law offices in Mississippi are Senator J. Z. George's law office, constructed 1838, in Carrollton, the Stennis Law Office, circa 1838 in Macon, and the Wohner Law Office, circa 1840 (MDAH, HRI).  The history of the building on the Freeland law firm's website, calls it the

I am surmising that 'continuous' is the distinctive difference, although I don't get how circa 1870 can be considered "prior to the Civil War."  The building apparently has been used as a law office for the duration of its life, whereas the George office reverted to use by the Cherokee Rose Garden Center, the Wohner office was formerly a dentist's office, and I cannot discover any information about the Stennis office.

When I first spotted the stone to the left of the walkway, I wondered if it had been the base of a monument or headstone.  I spent a while looking at it, trying to figure out why it was embedded in the lawn.  It is the "upping block" used by Phil Stone's father to mount his horse (Snell, 1991, as cited on Freeland website).  Growing up in West Texas, with western saddles and mounting up in pastures and rangeland, I had no idea what an upping block was.  We learned to mount by placing our left foot into the stirrup and then pulling ourself up and into the saddle, swinging the right leg over the saddle.  My uncle Tommy would use his hands to give us a boost until the day we were tall enough to do a standing mount from the ground.  That awareness of cultural difference sent me off on a hunt for the difference between plantation saddles and western saddles.  My friend advised that in the absence of an upping block, slaves were also used in Mississippi to assist the rider to mount.  In West Texas, an assisted mount was acceptable only if you were a child, or possibly a woman of refinement.  The rest of us were expected to get on the horse by ourselves.

To be fair, I will note that my currently 87-year old father now has to use an "upping block."  He walks Rio over to the deck and mounts from the top step.  I think at 87, that is a fair compromise for a man still able to sit in the saddle.
Posted by Suzassippi at 10:04 AM

I'd never heard of an "upping block," either, not that I am anywhere near knowledgeable about horse riding. The only people I've ever seen riding certainly got their own butts up on the horse. :) I do think your dad gets a pass at his age and the step sounds like a great solution.

I learned it had to do with the length of the straps from the saddle to the stirrup. Western saddles have a lower hanging stirrup, probably due to the difference in how it was used--and the fact that you had to get your butt up there in a hurry from the ground! Plantation saddles have short hangs, like an English saddle, where your knees are bent. Just another aspect of culture. :)

I always thought those blocks were for ladies to use to get in and out of a carriage, never thought of using it to get on a horse. Very interesting, now I'll be on the look out for these.

What. Is the Wohner Law Office?

The Wohner Law Office is housed in the former Kirkpatrick Dental Office, which dates to 1840. I presume Wohner is the current name of the office, but there is no other information about it on the MDAH site.

Dr. Allen, your dad has definitely earned his "upping block". I think it is so awesome he is still able to get on a horse. I love reading your blog. You know a little about everything.Lol. Your pictures are BEAUTIFUL, and your writing makes me want to read some more. And that says a lot because I do not like to read.:-) KEEP BLOGGING!!!!

You know, the more you read, the better you write. :)