Note: This entry was revised 11/16/10 to correct erroneous information about the architect who designed the Lyceum.  See comments section, and thanks to EL for the clarification! 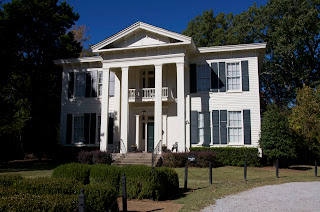 Cedar Oaks Mansion is a Greek Revival style, designed by architect William Turner.  I have seen the sign since moving here, and on one occasion, tried to find it without success.  After finally locating it, I know why.  You really have to know where you are going to get there. 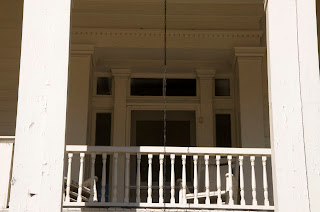 I actually finally found it last week, but there was a fire truck parked in front, so I could not take a picture.  Today, I was in the vicinity (I use the term 'vicinity' loosely--I was on the northeast side of town) as I had to go to the post office and since it was just a beautiful sunny and clear fall day, I thought I'd give it another shot. 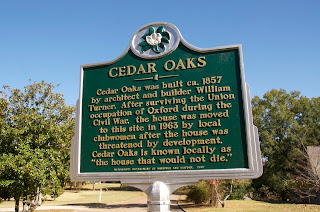 The house was headquarters for General McPherson during the Union occupation in 1862.  Turner's daughter, Molly Turner Orr, organized a fire brigade to save the house in 1864 after the Union troops set it on fire.

Cedar Oaks has been in recent news as the residents of this neighborhood (where the house was moved to save it from demolition due to development) have been opposed to the current caretakers' application to be able to serve alcohol at the private events hosted at the house.  The immediate neighbors cited fears for their children's safety in being able to ride their bicycles in the street if 300 cars were to be driven by people under the influence.

I am certainly not minimizing the safety of children, but frankly, I don't know how 300 cars (or the amount of people in them) could be accommodated by this structure.  There is a one-lane drive that might park 6 cars in front of the house, and the only other parking would have to be on the streets adjacent to the house.  I could be wrong--given how far people will hike from Taylor Road to get to the stadium for a football game--but I just don't see folks going to a wedding reception or an afternoon tea all decked out in formal attire and being willing to walk as far as it would take for that many cars to park in the neighborhood.  Assuming one had a reception for 300 people, they would all not fit in that house nor on the small lawn in front of it.  I'm thinking the number of people at events there would be similar to those that might attend a barbeque at Joe's house next door, or the annual New Year's Eve party at the house down the block.

Cedar Oaks cites the need for additional revenue as the reason for the application to serve alcohol--after all, some folks want to make a toast at the wedding celebration--and they claim they are losing business due to the inability to legally serve the bubbly.  (It sounded as if in one comment, there was acknowledgement that alcohol was served anyway, just not legally.)  Ah, the intricacies of small town life.

Anyway, I finally chalked up one more historical visit to my list of things to see here.
Posted by Suzassippi at 6:29 PM

Thanks for this post about a building I've never seen either.

I did want to mention that William Nichols was the architect of the Lyceum (also the Old Capitol and Governor's Mansion in Jackson). William Turner was a contemporary, but did other buildings in Oxford including Shadowlawn and Rowan Oak.

The Oxford Convention information stands corrected. I took my information from them, but will notify them of their error and ask them to correct it. It is good to have real historians and preservationists on top of things!