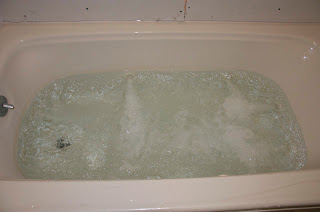 One more step in a long, drawn-out process has been completed.  Randoplumber crawled under the house yesterday and hooked up the drain to the tub and tested for leaks.  We confess to avoiding that task as neither of us likes dark, dank crawl spaces, or dark, dusty attics.  The difference is Randy will do it if he has to, whereas, I will not.  I would have called every plumber in Lafayette County trying to find someone to do that.

We had called Bubba, who has done a plumbing job and an electrical job for us before.  He came out, sent his assistant to look at the crawl space (which Bubba has been in before, when he fixed the last leak where Will broke the drain pipe on the sink and just wrapped it in duct tape--which will last for some 3 years before the tape comes unglued and the slow leak that we didn't know about becomes a gusher).  He said he would call with an estimate, but we never heard from him again.  I guess the assistant didn't want to go under the crawl space either, or it might have been the barking dogs.  I told them as long as they never opened a door that was closed, they would be fine.  But, I digress.

Randy put on his water-repellant pants and a plastic jacket.  He took his old motorcycle boots that Roadie had chewed the top off of one, stuffed his pants into them, and duct-taped the boots to his pants leg.  I said, "Is that to keep things from crawling up your leg?"  Yep, it was.  He said he wasn't sure what might be under there.  He declined to allow me to take a photo for the blog. :)  He headed out, with his gorilla light, saw, wrenches, and slithered under the house to lie on his back.  I have to admire that man--he hates plumbing with a passion.

My job was to sit in the dining room next to the opening in the wall and listen to see if he needed anything.  There was a small opening around the drain, which he had to enlarge as the rough-in directions on the tub installation were incorrect.  I had to hand him the wood chisel through the opening as there was one spot where he could not get the saw.  My next task was to unplug the electrical cord when he finished with the saw.  He allowed as how there was water down there and he was not interested in being electrocuted while working on the drain if he could avoid it.  No more incidents and he finished up shortly.

The fill test, and hurrah!  If I could just get a weekend where I was not working on class prep or grading papers, I might get the bathroom finished before Christmas.
Posted by Suzassippi at 9:12 AM

Woohoo! I would have liked to have seen a photo, darn Rando's eyes for denying me that pleasure! Good job!