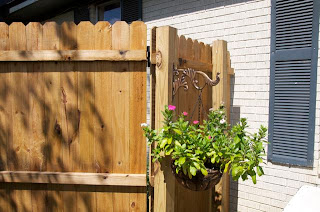 The sunshine is back! It is a welcome site after weeks on non-stop daily rain. I awoke to rain this morning, but it looks as if the front that has been stalled over Mississippi for days has finally decided to move on to less soggy pastures. 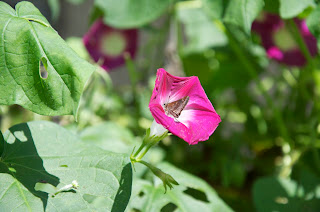 I was just finishing up my daily lessons on Motivating Mississippi, read Bill Maher's latest column about how what we eat is making us stupid, and recalled a student asking me for help yesterday. Suddenly, I felt the first genuine smile I have had in weeks come to my lips, and then the sun came out.
The student is a single mother with two young children, and she is very intelligent and hard-working and takes her school very seriously. She parents the same way, just having taken her young son to hear the Dali Lama in Memphis on Wednesday. After the policy class, she walked out with me and said she might need my help on something she had "gotten herself into." Her children's school received money from the Reinvestment and Recovery funds to increase parental participation in their children's education. They sent out letters of invitation for "Muffins with Mom, Hotdogs with Dad."
She marched herself up to the school and asked to talk with the administration. She pointed out that Mississippi is number 1 in the nation for obesity, diabetes, and high blood pressure and the last thing we needed to be doing was adding to that. She had read the stipulations for how the money was to be spent, and had a list of suggestions for activities that would increase parental participation without a junk-food feeding frenzy. I was thrilled: policy advocacy in action.
I choose to regain my sense of what is possible, and move to standing in the inquiry, not the circumstances. Even if it does start to rain again.

I spent the day in Tupelo, leaving at 8:45 this morning and returning home at 6 p.m. tonight. Rain and storms before, during, and after made it a harder day than usual, though it brought some moments of relief as well. I am teaching an online research writing class this fall, and it has been very frustrating for the students and for me. I went to Tupelo today to be available to meet face-to-face and respond to their concerns.
I had two group meetings, and then some individual students came by to talk with me. All in all, I met with quite a few of the class, and worked straight through with no lunch break. I think it was productive and helpful, and seemed to alleviate much of the anxiety and frustration. It is all kinds of things: lack of high speed internet for some of them, lack of confidence in their ability to write, change from a community college to the University of Mississippi, technical problems with the program, and above all--fear of failure and the consequences for their study.
I want to be careful how I say what I am about to say, but in many ways, it reminds me of the huge negative legacy that racism has left in this country, as well as the world. Let's face it, Europe, England, and the United States colonized Africa, Asia, Central and South America and we are still affected by that. While these countries (members of the Global South) are deeply in debt to "developed nations" it is directly related to our having stolen their land, their land's minerals, wood, and animals, as well as their people.
It is impossible to suddenly say it's their responsibility when they lost a great deal of their own natural resources--including their people who were enslaved and are now part of the diaspora--spread all over the world, and rarely welcomed where they have been "home" for generations.
How does that relate to today? I am the big, bad Ole Miss professor who expects things of them that others have not expected, and they were afraid. This is a new world for many of them, and it is a terrifying endeavor that some of them fear they will not be able to do. I spent a lot of the time reassuring them of my commitment to helping them master the skills to do this, and explaining its relationship to social work practice. It is not about failing them for not knowing, but helping them to see what they do not know and then how to master it. I think if we do that in teaching, we leave students with skills that can be used in other ways. Now, true, I do not have much patience with the student who intentionally plagiarizes and cheats, and I have no problem in giving such a student a failing grade.
I also have no problem correcting, showing, enabling, discussing, revising, re-reading, etc, as often as it takes for the student to learn whatever it is she needs to learn. I hope that came across today, and from their comments, I think it did. The problem with the online is that there is not that human interaction. Online works with motivated, self-directed learners who read and comprehend, but it may not be the best approach for students who are new to education, and certainly new to advanced education.
The reason we decided to do online was because we had no faculty willing to teach the research writing class on the satellite campuses. Most of the faculty do not like to teach it or just will not teach it. True, it is a lot of work. Doing it online was an attempt to make it doable, since I not only like teaching it and constantly try to figure out better ways to teach it, but also was willing to take on the online and evaluate its usefulness as our student enrollment keeps growing and the faculty are stretched thinner.
While it was a day of travel for me--for which I do not get paid nor reimbursed, and a loss of a research day for me--but will still be expected to produce my weekly research, it demands a lot of me. I don't resent the loss of money, nor the loss of time as I feel it was beneficial. I will do it again in two weeks. I hope the face-to-face helps them to feel more comfortable with it. As I shared with them, if they do not communicate with me, I am operating from what I assume and anticipate. So, in two weeks, I will go do it again. At that point, we are at mid-term, and it is a good place to evaluate where we all are and what we need to do next.
I well may end up over there every week, or at least every two weeks, for some of them. The majority of the students are doing fine, and have had no problems since the beginning of the class. I guess as long as it is only one hour away, and I have the time and ability, I will do what it takes to enable them to pass when it seems they are trying and desiring to master the class. It kind of looks like it is going to be a long semester...the times they are a changing, and this well may be one of them.
Posted by Suzassippi at 7:26 PM 1 comment:

Where have all the flowers gone? 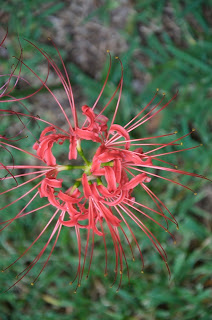 Sitting outside a couple of days ago, I noted these flowers had bloomed. The first year here, they bloomed in April, but it seems to be later each year. Normally profuse, only two have emerged in this spot. 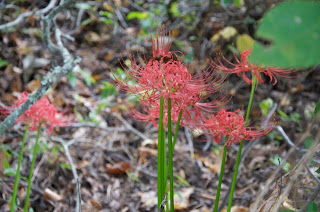 There is a small patch of them in the woods next to the driveway as well. I cannot imagine anyone planting them in this location, so have often wondered how they got there. 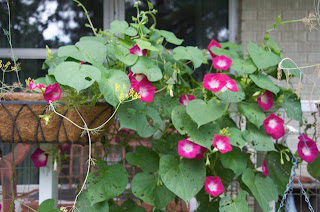 The dill is going to seed finally, and the bugs have eaten lace into the leaves of the morning glories--which have also taken over the dill. I kept them off it while I was still using dill, but it is pretty well gone now, so I have let the glories do as they please. 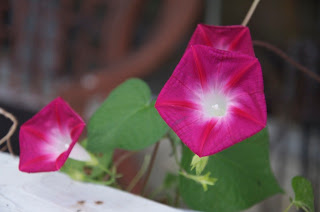 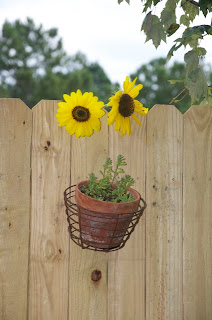 Sunflowers peeking over the fence. 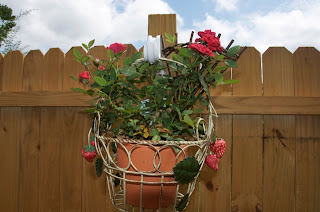 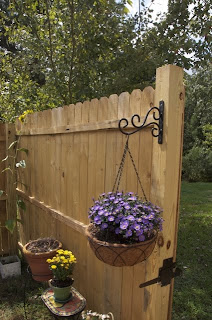 My latest addition to Libby's kennel--some fall asters. Libby said she did not really care, but if I would hang some hot dogs or a picture of Kate out there, she could really go for that. 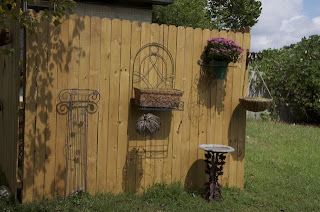 The birds seem to like the new location for the birdbath, and the mums are going strong, even if the alyssium is waning, along with the basil. 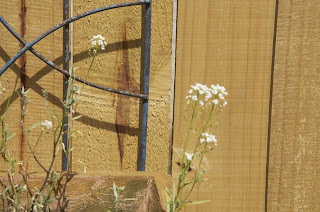 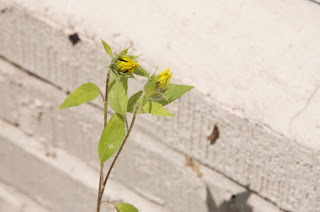 The sunflowers in front of the house are about to bloom. These are a different variety, and quite short.
While it can still get quite warm during the day, the mornings and evenings have a chill in them and this is coming up on my favorite time of the year. I tend to get a lot accomplished in the fall as well, so I hope to shift into an improved production in the next week. School is pretty much under way and going adequately. Research is slow going right now due to all the administrative responsibilities for starting a new semester, but that will even out soon, too, I hope.
Alas, time to get back to cleaning house--a never ending chore for me it seems.
Posted by Suzassippi at 12:25 PM 5 comments: