Mary is a little lopsided. 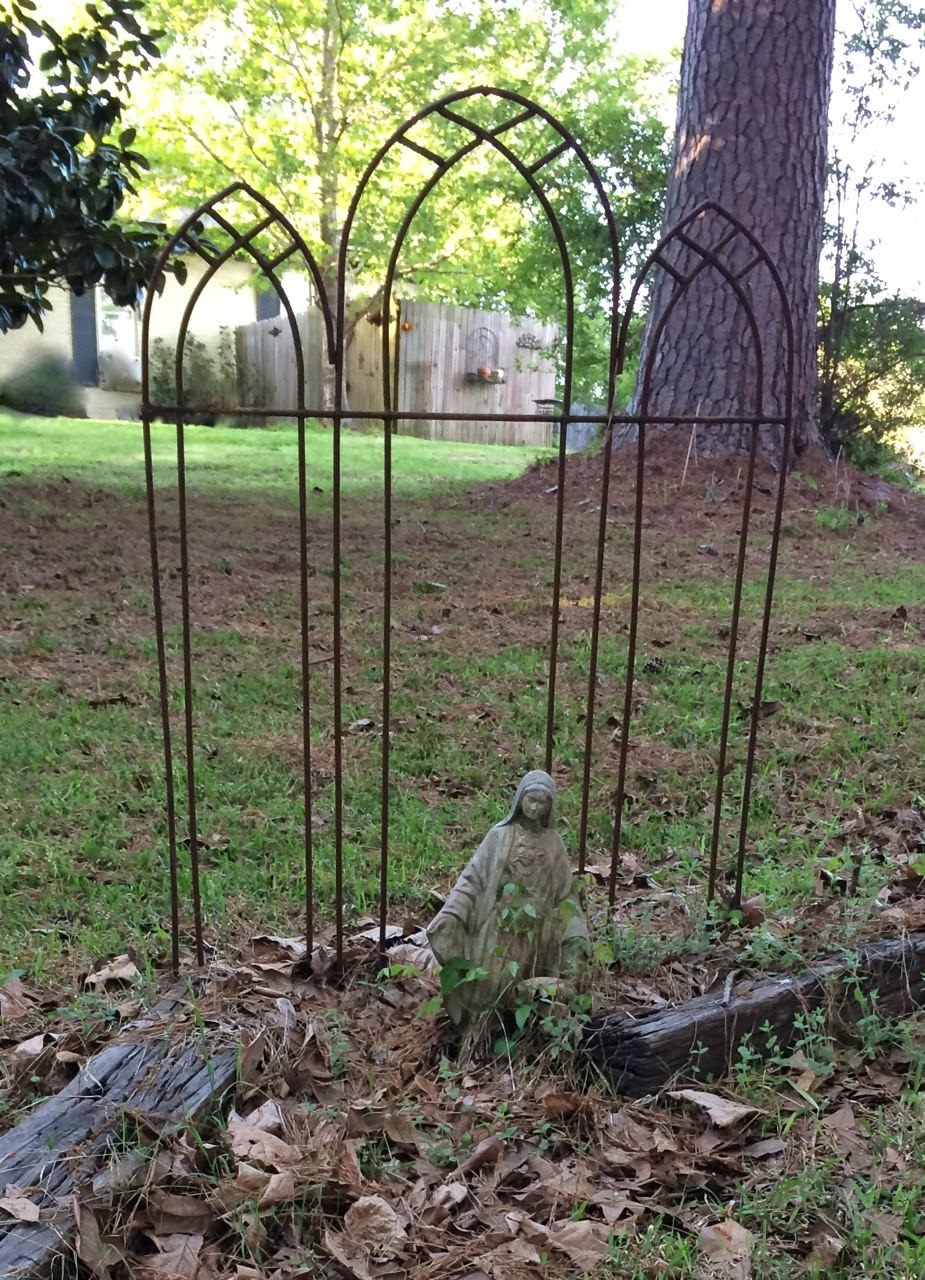 I suspect there are quite a few women in my life right now who are feeling lopsided, pulled in directions in which we would rather not go.  But, like Mary, we just weather it, mired in the muck of dead leaves, new vines, and the ever present water sluicing past our feet. 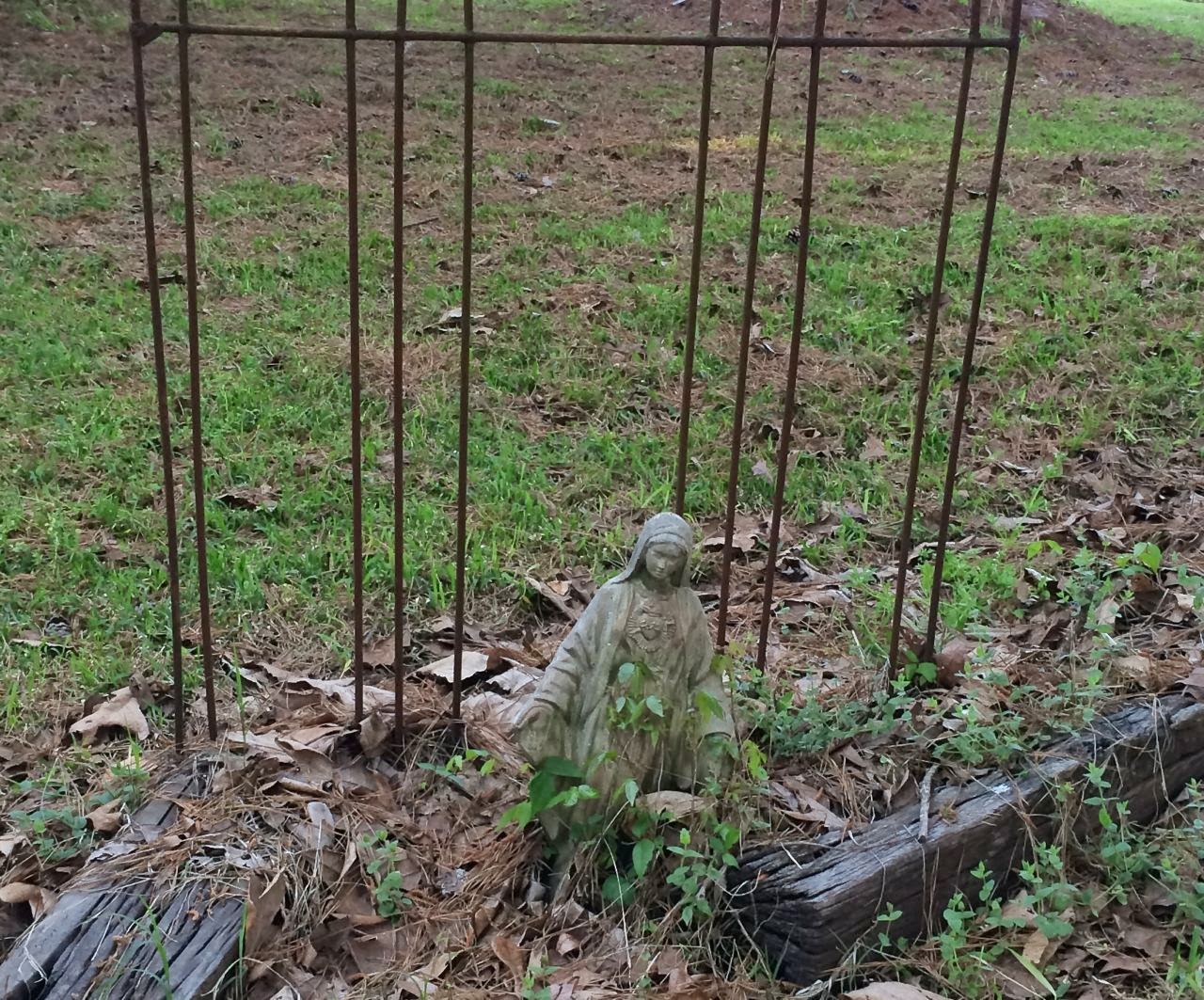 I was wandering around in the yard Sunday afternoon after we finished mowing--following the ordeal of unloading the new lawn tractor we were finally forced to buy.  Our old John Deere had lasted faithfully for 11 years, but there was no way he will make it through the next 5 on this difficult-to-mow hillside.  We needed to back the truck up to the only spot on the hill where one can off-load a tractor without having vehicle ramps--which we don't have.  Remember that part about the ever present water sluicing past our feet? 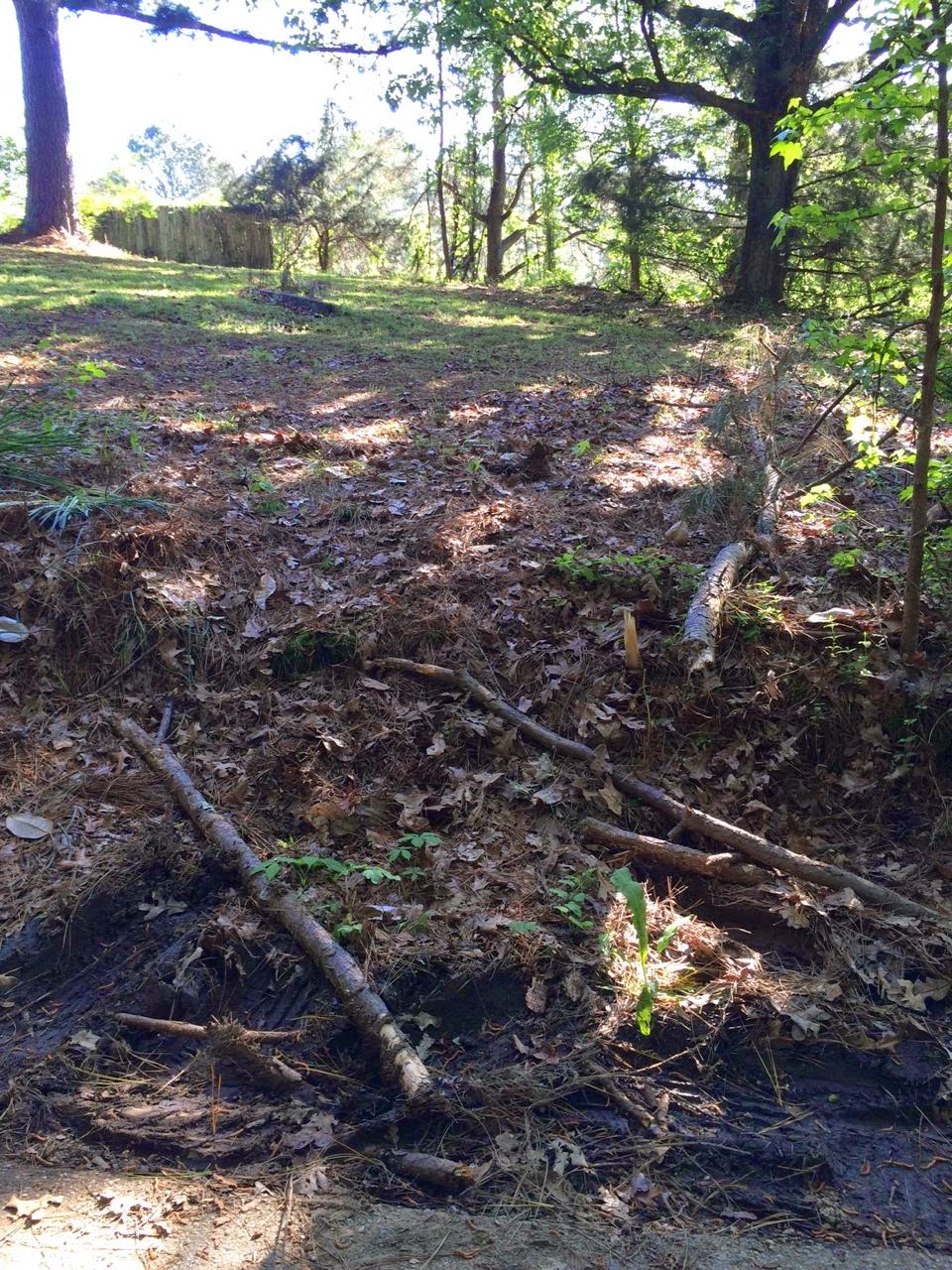 I told Randy to give me a few minutes to do some prep work at the spot.  I knew it would be muddy under all the leaves and pine straw.  My plan was to place some of the pine logs (from the last storm) across the deepest part where the truck tires would sink, and lay several boards across it for some traction.  He deemed it not necessary. 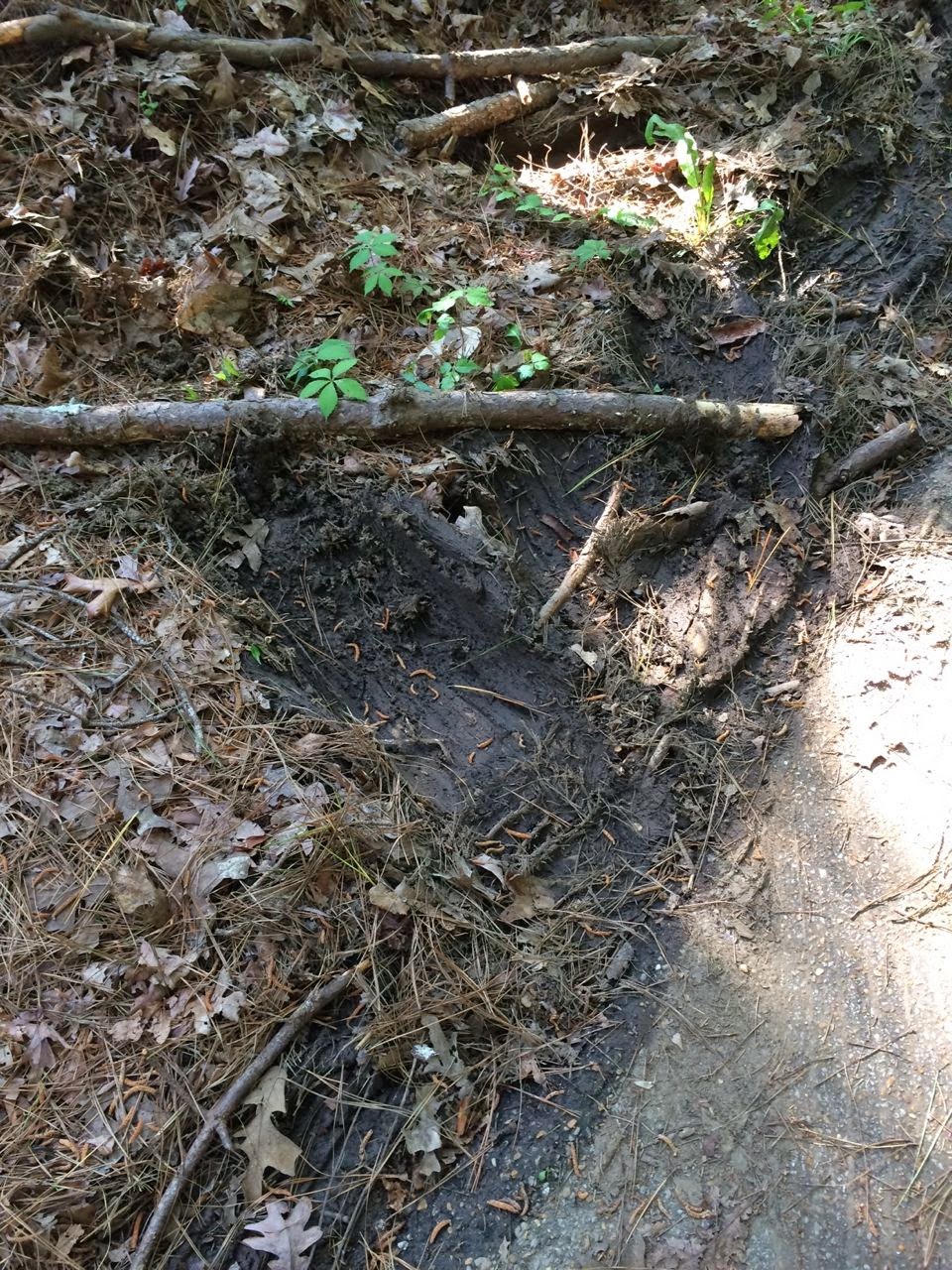 Needless to say, the tires were spinning, with no place to go.  Mud to the back, mud to the side, mud to the front.  "Please move the truck so I can do some prep work here." Saplings had to be cut so he could pull forward enough to be able to straighten the tires and then back up, and a sapling had to be cut at the spot where the tail gate needed to go. 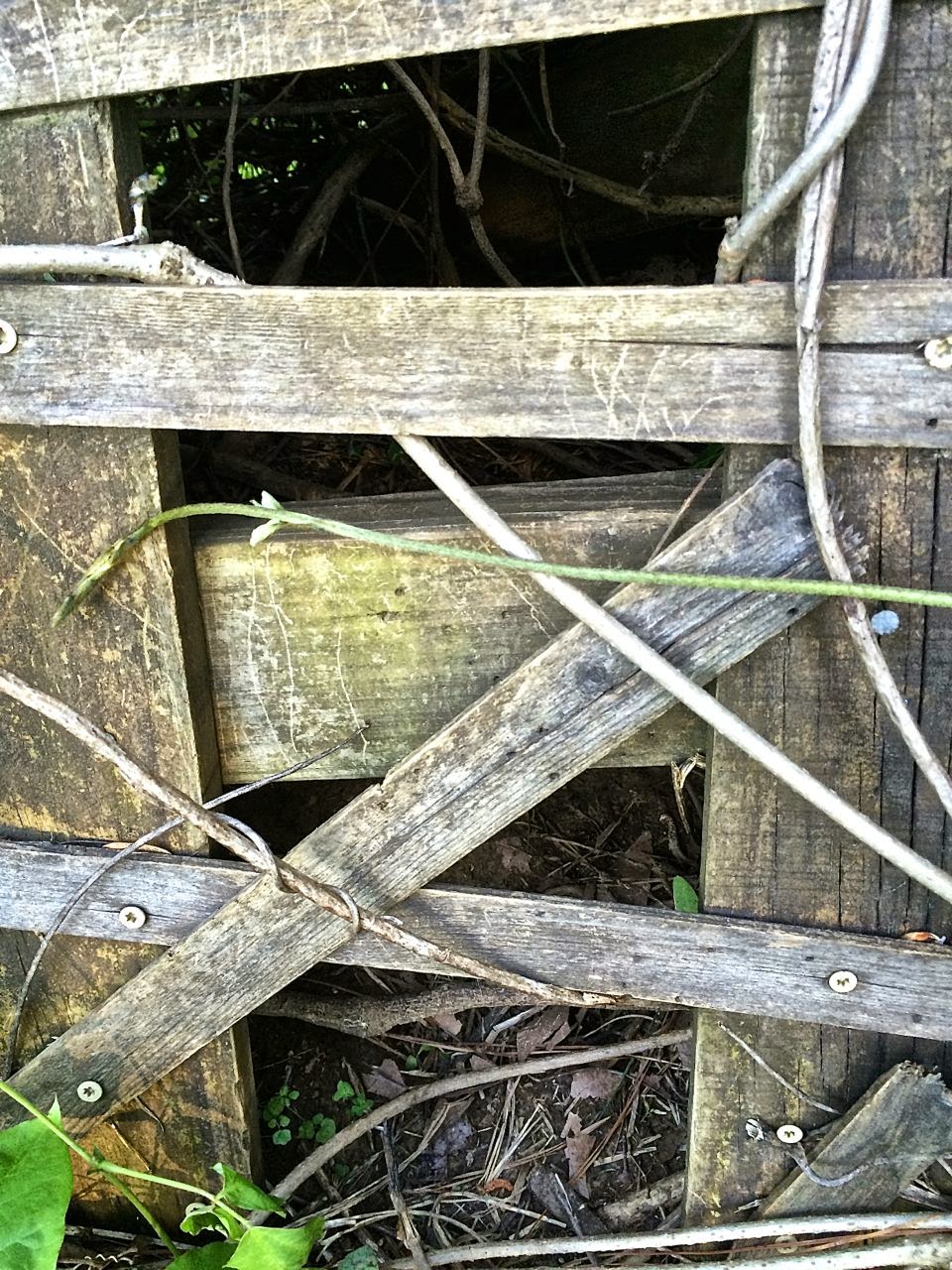 All of these tasks were made unnecessarily more difficult because of lack of planning and lack of patience.  My hip and knee have paid the price the last 2 days from bending over from the waist.  But to point that out?  Best a place not to go.  Like Mary, I am a little lopsided, but better to be lopsided in peace. 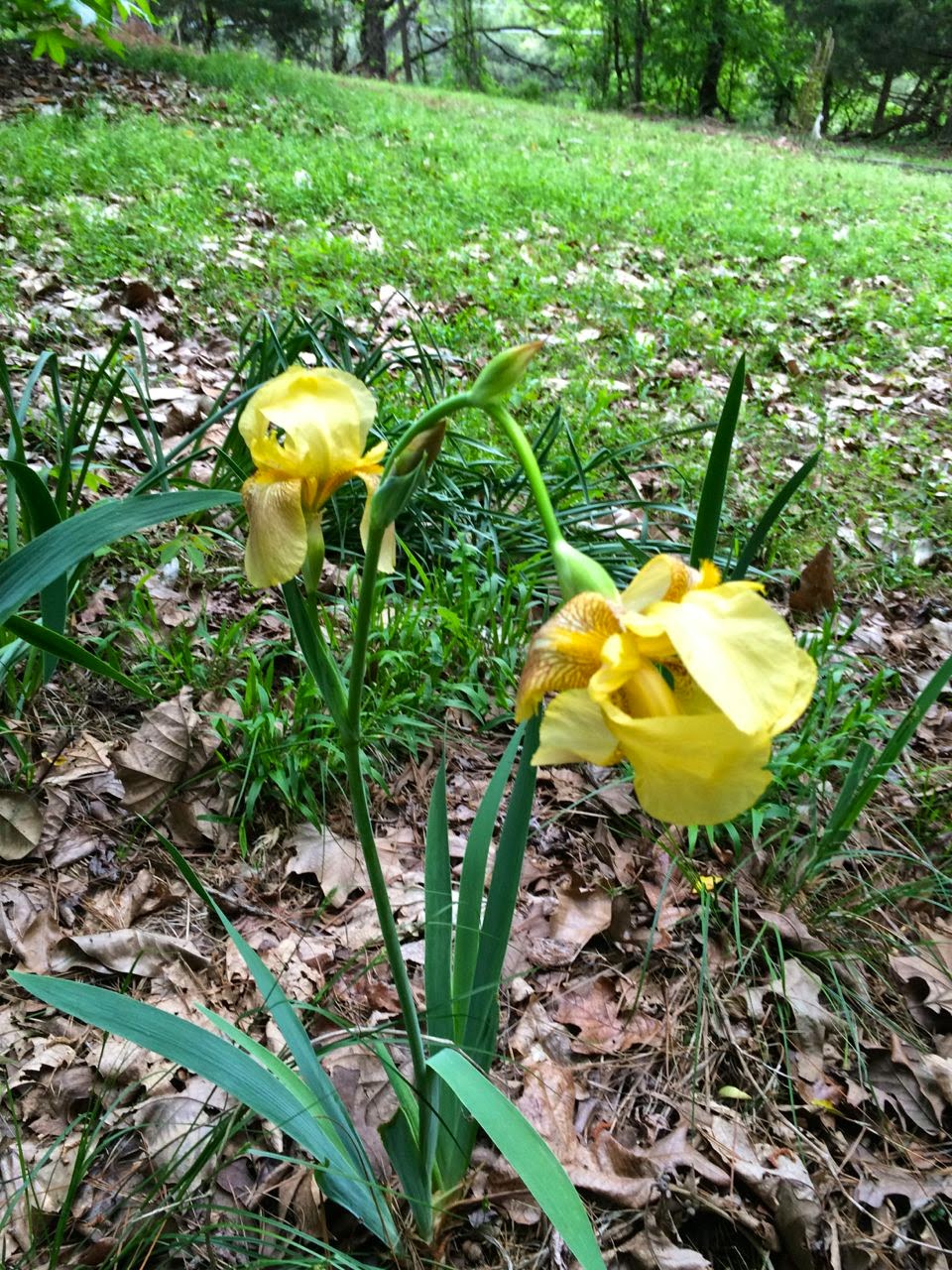 Eleven years ago when we bought our little Taylor hillside, I planted the iris rhizomes I had brought from Texas.  They had been carefully culled from my grandma's little place in Young County, toted up to Taylor County, and finally hauled to Taylor, Mississippi.  Like almost everything else, I was totally unprepared for living in a suddenly wet all the time environment after a life time in dry northwest Texas. About 3 years after I planted, and nary a bloom had been seen, I went out one morning to take out the trash and there was a riot of yellow irises blooming by the trash bins--where I had carelessly tossed the rhizomes I decided were too far gone to plant.  They had lain on top of the ground in an elevated area by the driveway.  After that surprise, it has been a long spell of nothing.  I kept thinking the rhizomes were too deep and probably drowning in all the soggy soil here where it sucks your foot into the spongey ground as you walk.  I never got around to doing anything about it. 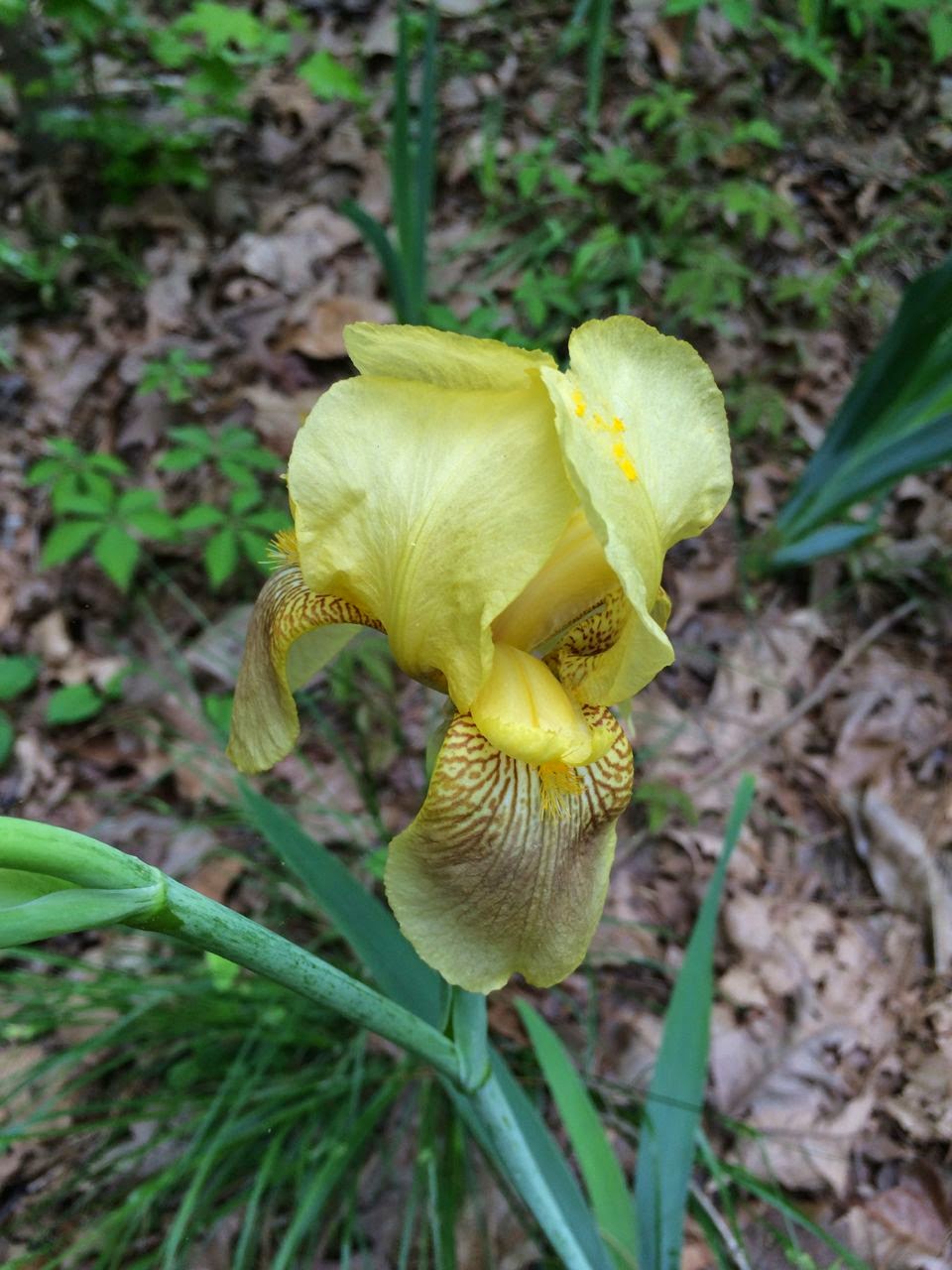 While home a couple of weeks ago, Sis and I were talking about Grandma's irises, and I bemoaned that none of them had bloomed save the ones by the trash bins one year.  Yesterday morning, I went out to stretch a little from having spent all morning on the computer grading and prepping.  A little flash of yellow caught my eye and I walked down the hill. 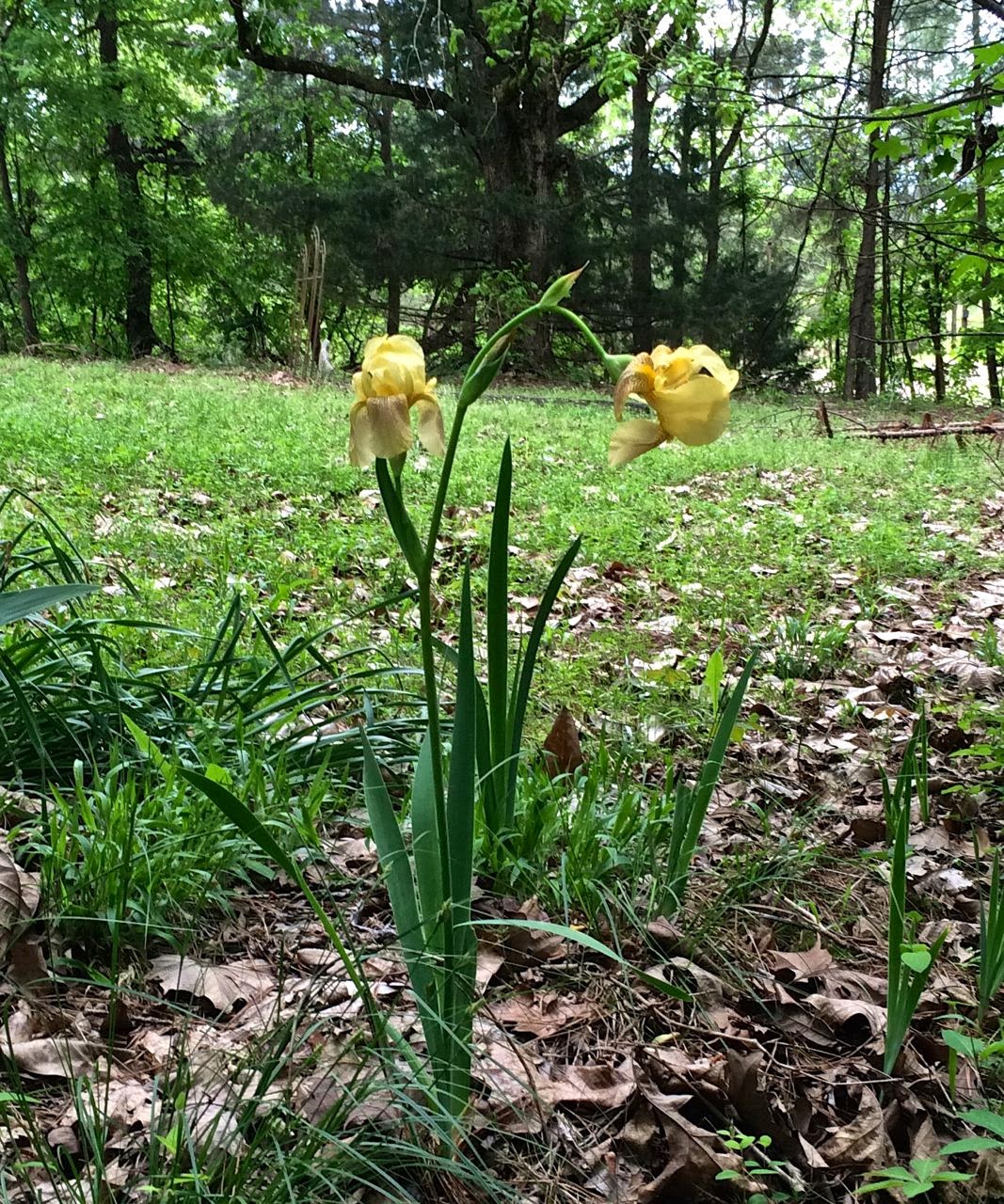 There she stood--the first time since arriving to this hillside 11 years ago, two yellow-as-sunshine blooms, with a third waiting to show out.  A gift I was not expecting--the best kind. 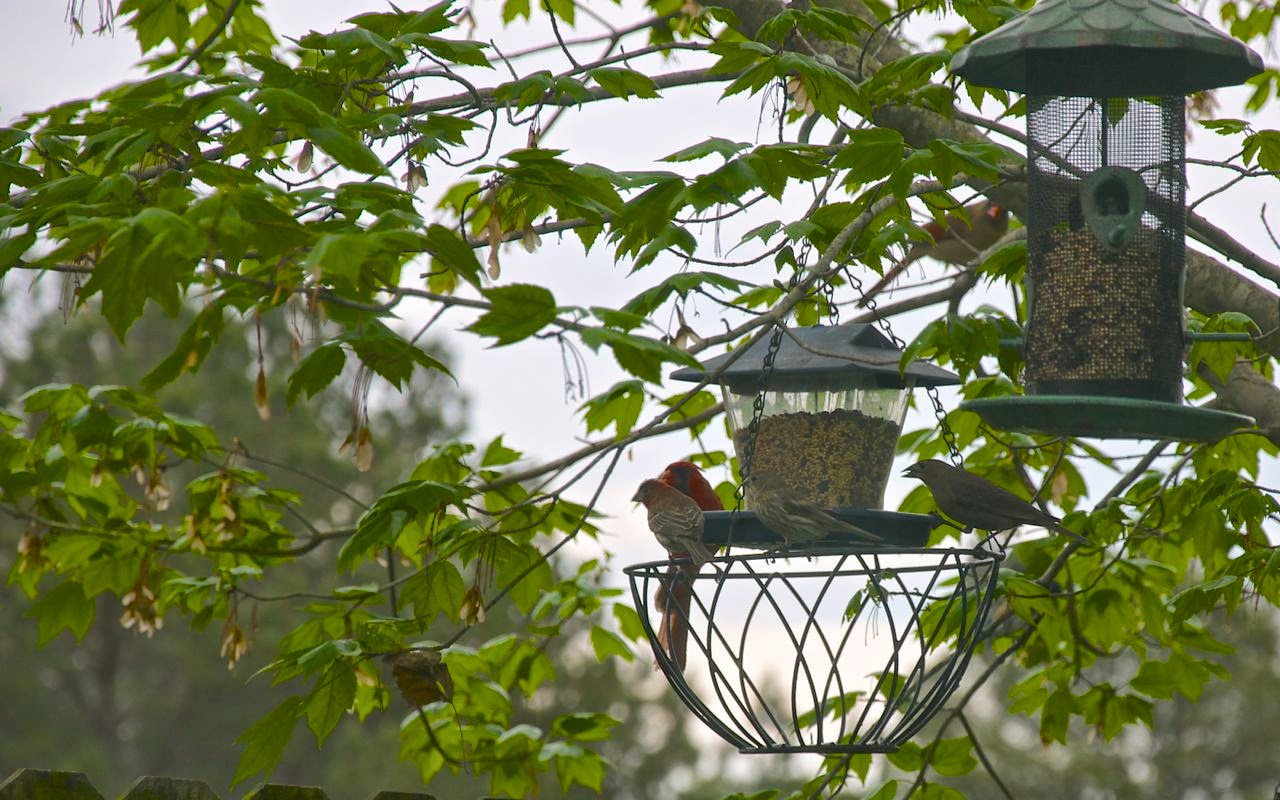 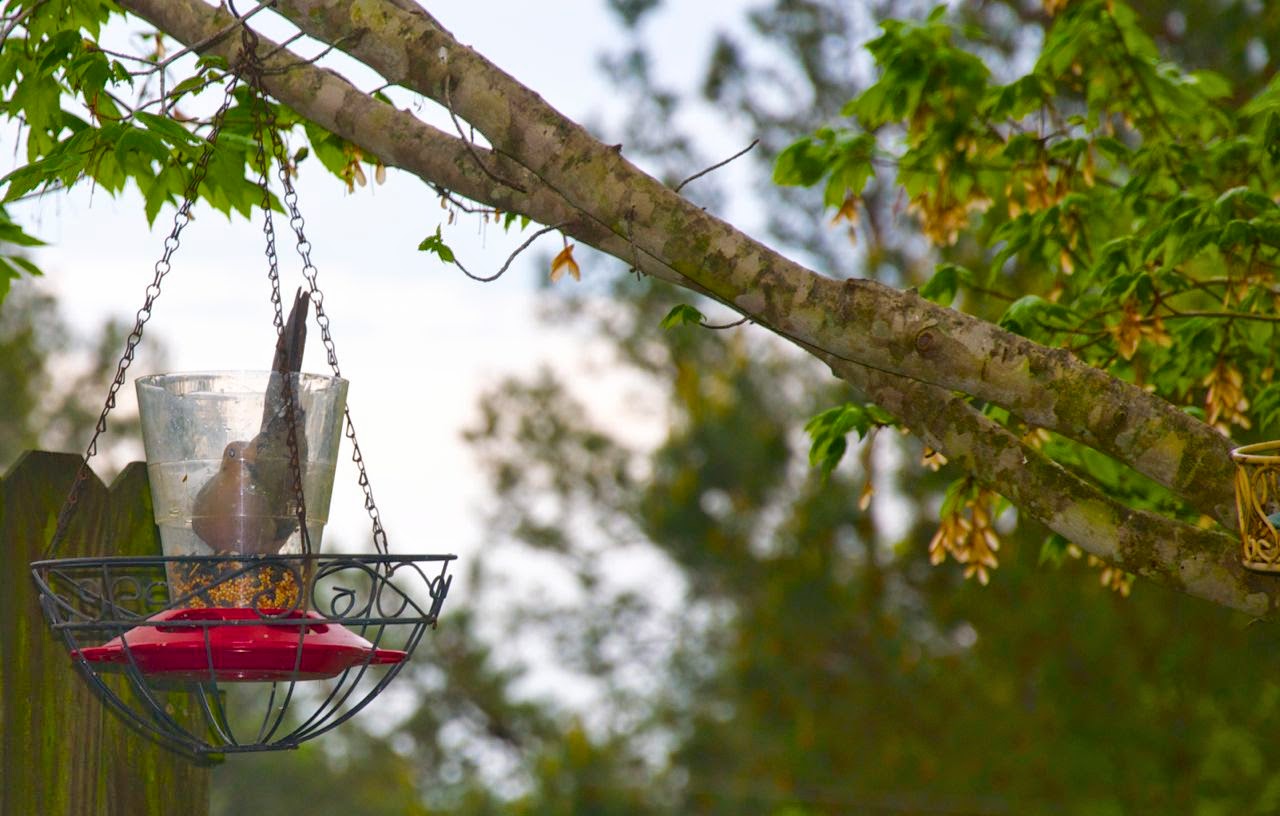 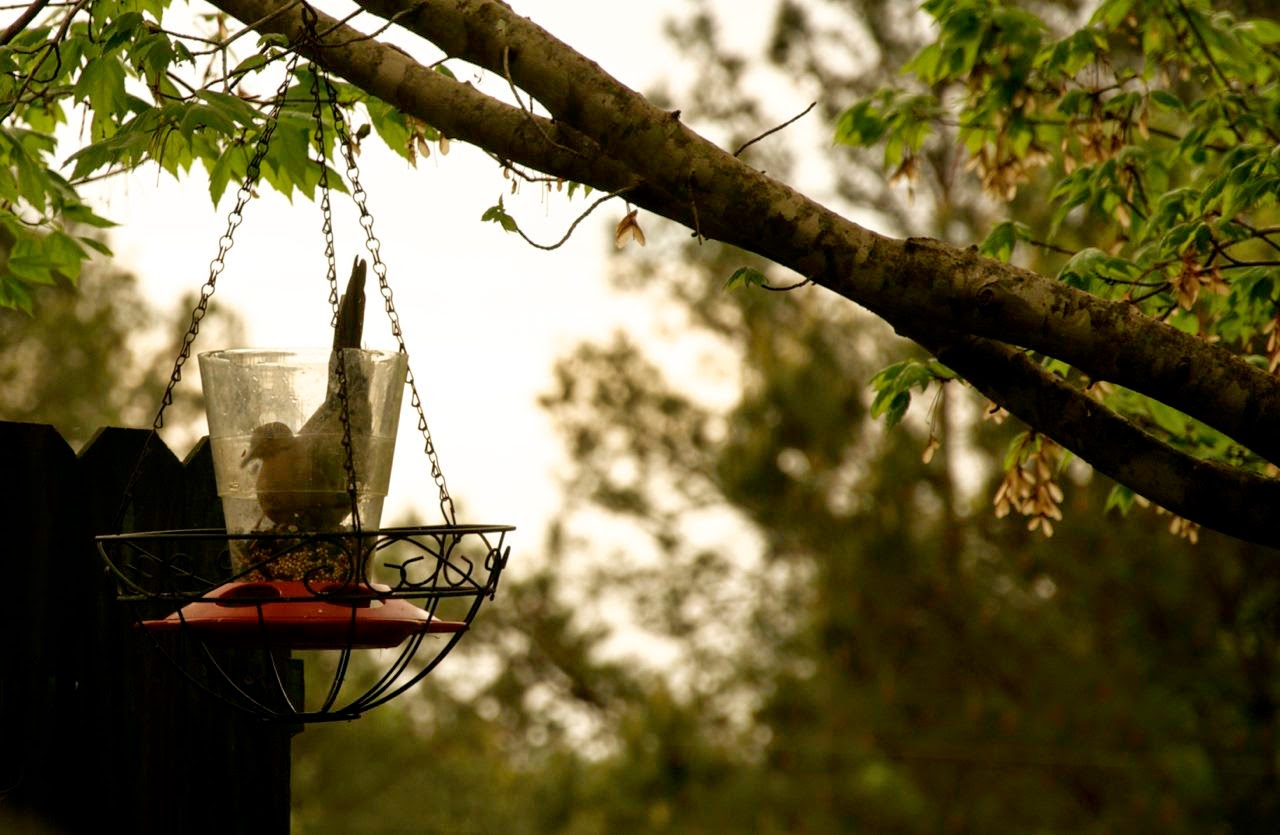 Posted by Suzassippi at 7:52 AM No comments:

When in April the sweet showers fall...

I flew down to Texas last weekend because I couldn't go spring break.  Mom's list of "things to do" had gotten longer in the intervening days.  Good Friday was hot and sunny.  A cold snap turned the weekend into a raining, drizzling, chilly mess.  No one in Texas would dare complain about rain, so I made the best of it sloshing through mud in Rio's lot. 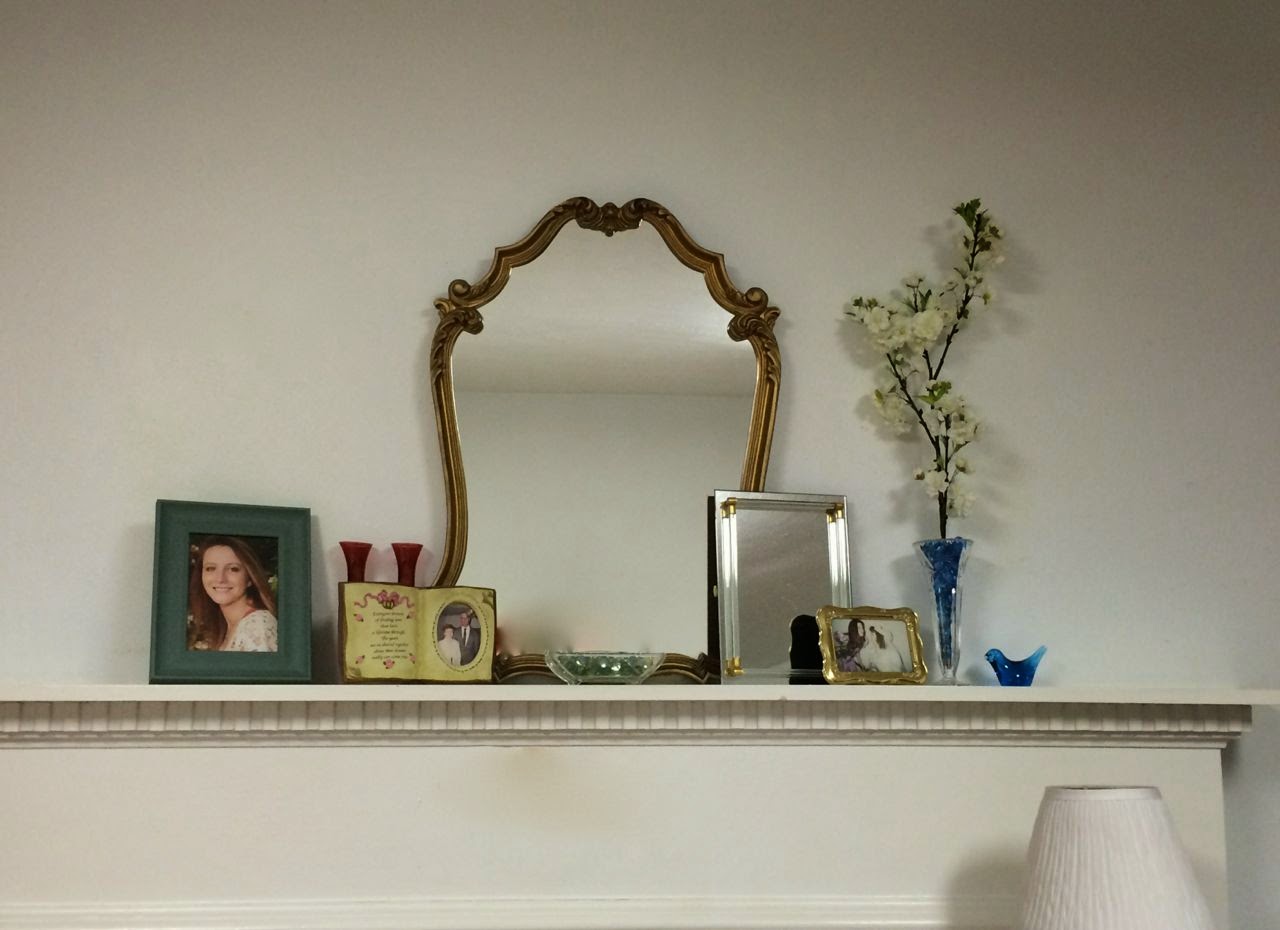 On Mom's to do list was to rearrange her mantel.  She had seen a picture in a magazine and wanted hers arranged like that and had picked out the pictures, and my job was to find the rest of the items that would make it look similar to the magazine photo.  It was kind of fun, digging through her cabinets, drawers, chests, and scoping out all the rooms to find things to make it balance.  She likes it, and Sis and I agreed it was waaaaaaaaaay better than before with her 1990s' "home decor" that we have been slowly trying to tone down and simplify. 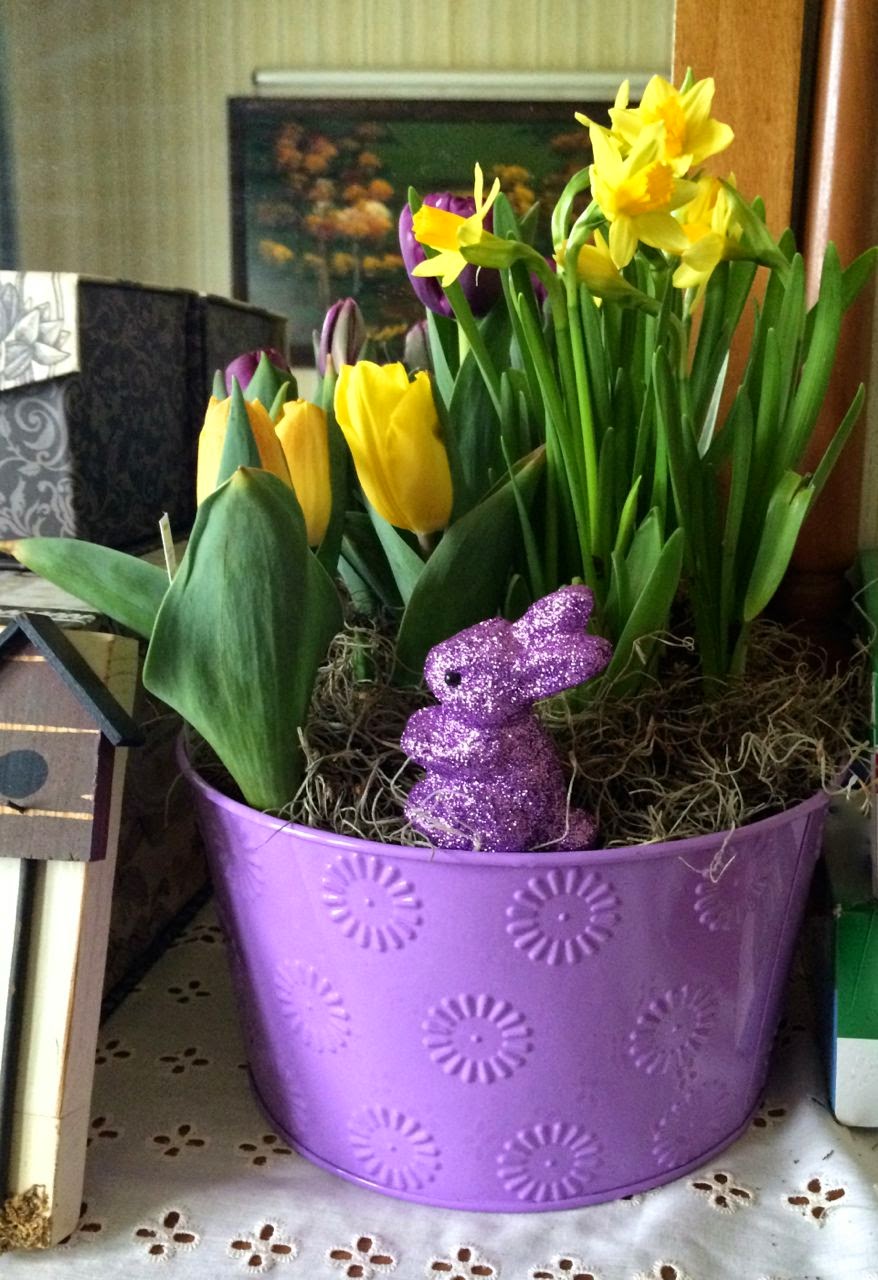 Sis and I had to stop for a few groceries after she picked me up at the airport, and I had picked up a bouquet of roses for Mom.  While out getting groceries Saturday, I picked up an Easter flower arrangement for Dad's room.  He does not get out of bed on the weekend any more.  Sis always decorates for the season and any reason she can come up with.  She said it keeps them engaged and they like it.  I brought them in and said I could not let my sister out-do me on all the rabbits, and Dad laughed at that.  It is true, she has rabbits on the place mats, rabbits on the buffet, rabbits on the potholders hanging by the stove, rabbits on the hand towels..... But, I think she is right about engagement-- Dad commented every day and then some about his pretty flowers, and how many more had opened up during the night. 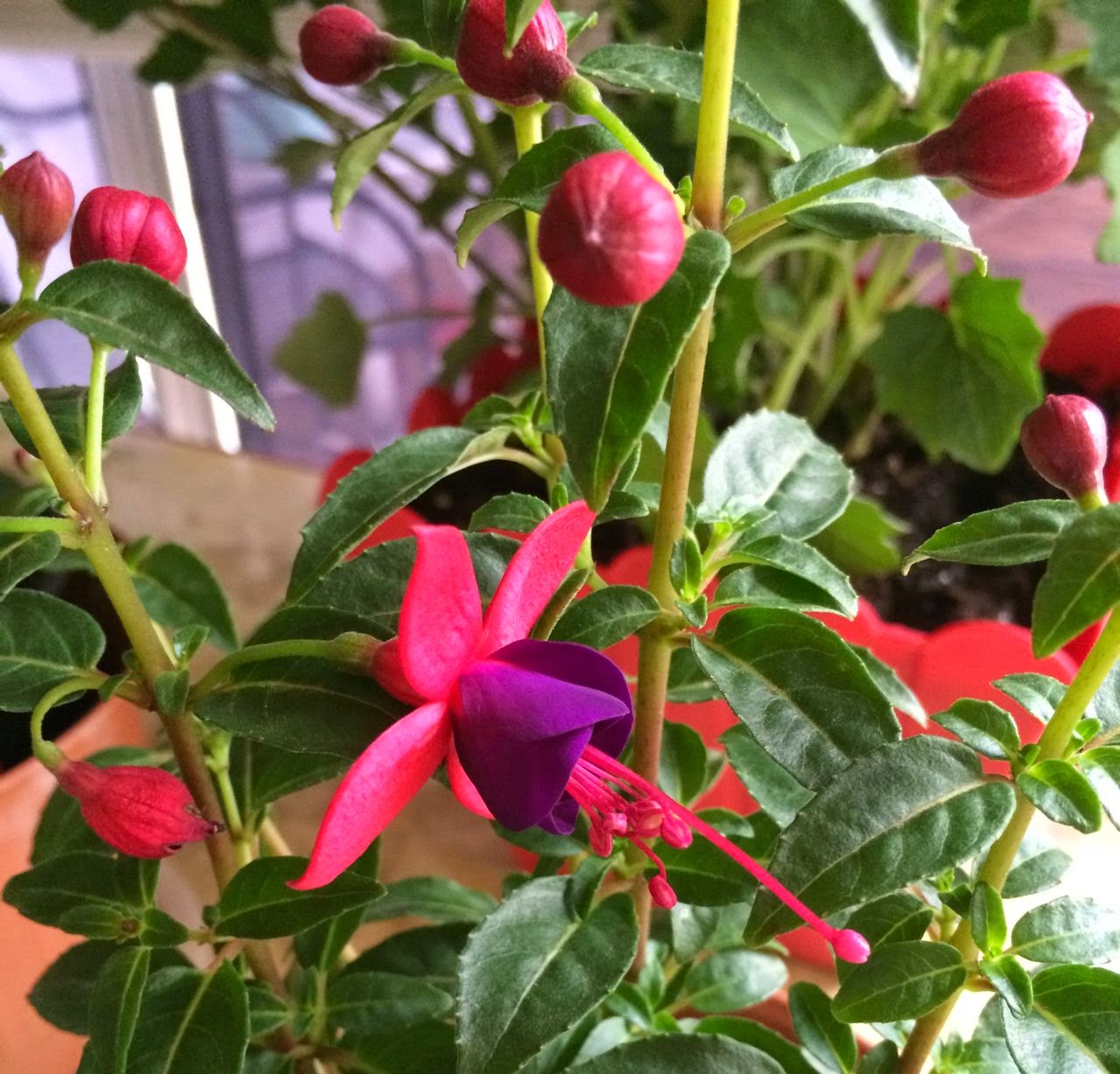 She hasn't had time to put out spring flowers, so I picked up a couple while at the store to help get started in the transition.  I got one re-potted, but then it started raining so I couldn't put it on the deck, and ran out of potting soil--I was not well-prepared, was I? 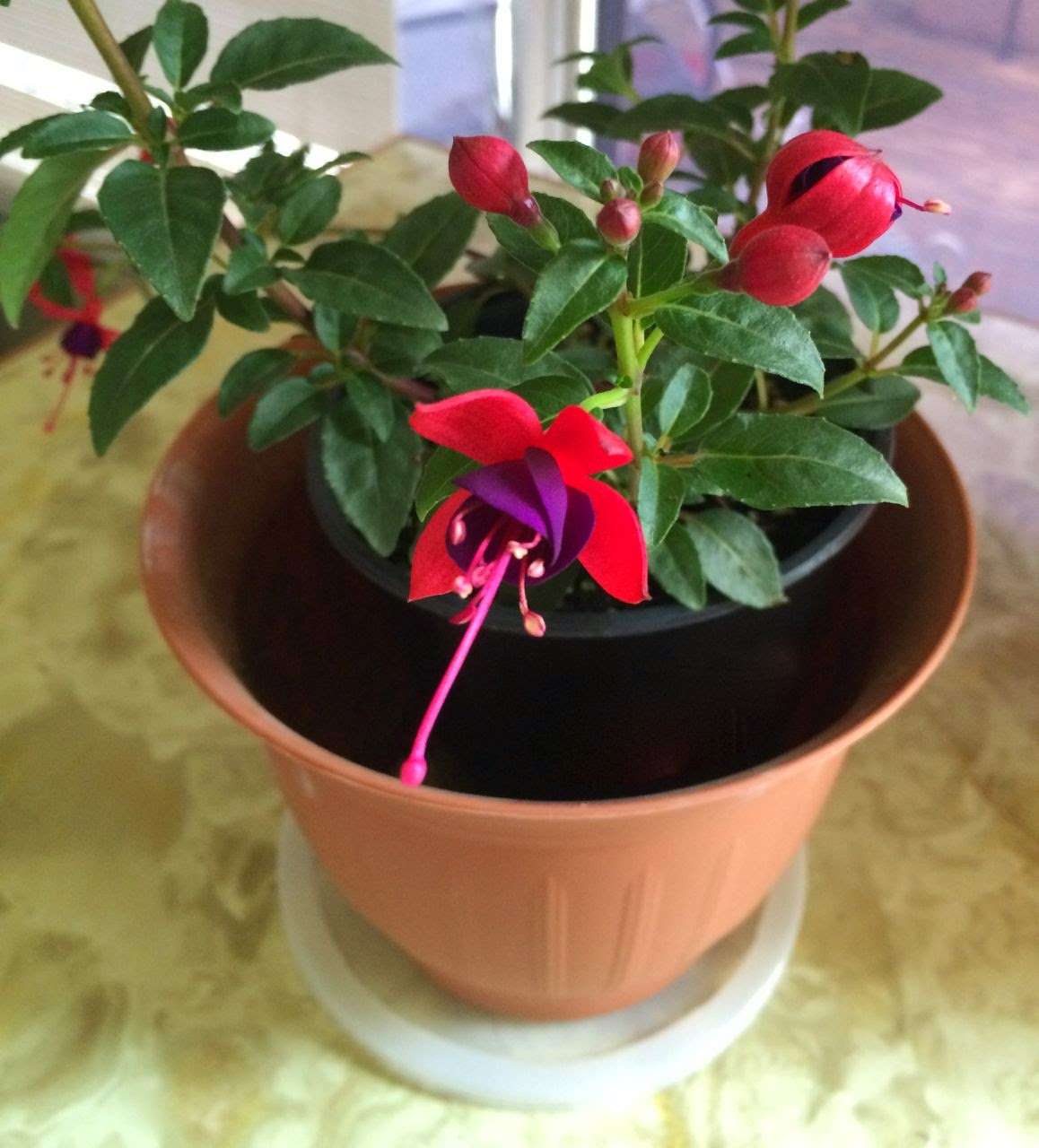 I have no idea what these little red and purple flowers are called, and I don't recall ever having seen them before, but I was enamored of them, so into the basket they went.  Horse feed and treats for Rio was the early morning Saturday chore as the feed store closes at noon.  I love going into the local feed store!  You just back up to the dock, get out and tell them what you want, and then go inside and tell them what you got and pay for it.  A feed store smells like no other place, and their chocolate lab is always right there by the counter, looking as beautiful as ever.  I always tell him cousin Kate says hello. 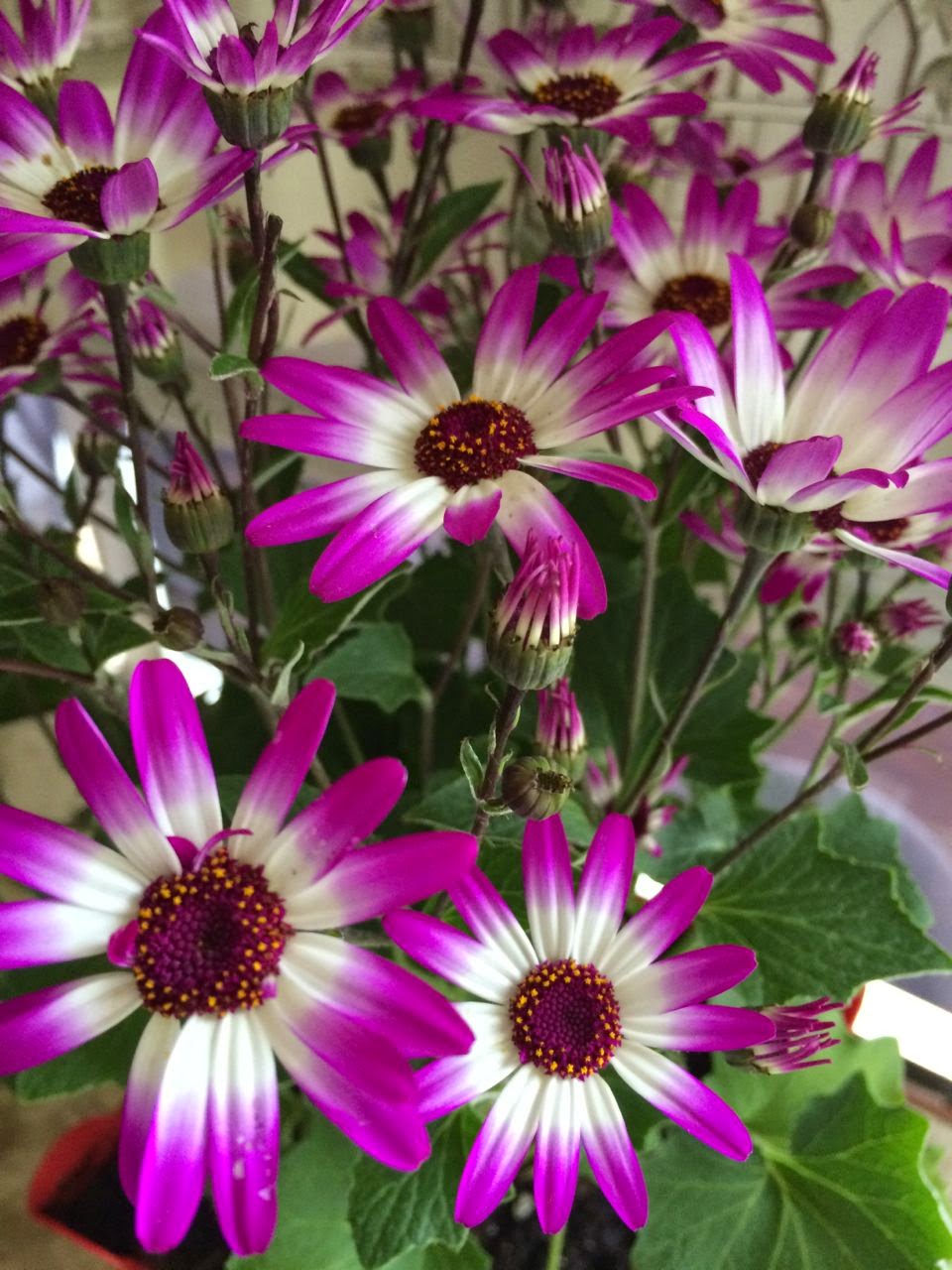 Dad was in a super good mood all weekend, and Mom was in a bit of an upswing as well, so it was one of the best visits in a while.  Mom is in the process of going through her photos to make a photo collage (one of the things on her list for a long time now) so we spent a lot of time looking through them and picking out which ones to put where.  That of course always entails talking about what you were doing at that particular time the photograph was taken.  It is literally like watching your life pass before your eyes.

And then, before you knew it, we were heading back to the airport and I was home right in time for pine pollen season.  Life is so sweet.
Posted by Suzassippi at 9:15 AM No comments: