First, thanks to my little Libby for keeping me company this week while I have spent so much time in bed.  She loves it when I am in this room as she gets to come in all by herself and take a nap on the bed. 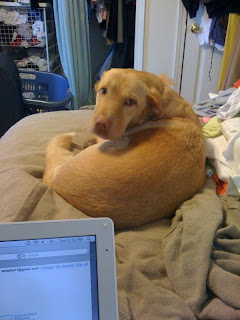 It was great to see the sunshine finally today, and have a warmer day.  With no wind, it made it feel really nice.  I am also a little better today, so that also helps.  And the final good news, since I have been ill, I have lost over 10 pounds, so that was at least one good side effect.  I noted my belly was flatter today than it has been in a while, so decided to hop on the scales.  While I don't recommend this "plan" I must admit that coupled with my new focus of no sweets, limited breads and no wine, I appear to be losing some weight.
That was the only good news of the day, so to speak.  As is everyone, we are in cut the budget mode here, too.  I had to go in for a meeting regarding how we cut 5% from our budget.  That is not a pretty picture.  We lost our travel, some contractual services (provides our copying, telephone, and internet services), student worker funds, and facing another round in a few months.  That means salary reductions and/or position losses at that point, as there is nothing else of significance to cut.  But ever optimistic, we are at least glad we have jobs right now; so many folks don't, or don't have work that is meaningful and supports them.
Now, about that on the edge part--I find myself wondering why sometimes I seem to be the one who sees something differently than others.  I am involved with a professional group here, and it seems that I am often the one who is the "no" vote on issues.  I think I am a reasonable person, able to hear information about as objectively as possible, and then make a reasoned decision based on the whole picture, not just narrow self-interests.  I suppose a lot of that is from the constant use of systems thinking as a social worker.  I tend to want to look at all of the system, and its suprasystem and its subsystems.  When I hear what sounds like a rational and reasonable approach to an issue, even if it may not be in the selfish interests of me personally, or my profession, I hope that I am able to acknowledge the greater good and greater benefit to others, even if it means a sacrifice to myself.
So, here I am again, the dissenting voice saying that the other approach is reasonable, rational, makes sense, and will benefit the greater good, and ultimately in the long run, our profession.  I feel like what is happening though is that the assenting voices are putting their hands over their eyes and ears and shouting "nananana" in order to avoid having to consider my point.  I feel like I am being patronized for having "such a thoughtful response" and yet no acknowledgement that it (1) makes sense, (2) anyone agrees or disagrees, or (3) wants to even discuss it.  It feels kind of like "don't you worry your pretty little head about learning how to change a flat tire, honey; some big ole trucker will always stop and help you."  I sometimes feel like the question(s) placed before this group of which I am a member are just formalities, and I wonder why I take it so seriously and feel the need to say, "hey, what about...?"  This is not the part about making other people wrong and trying to be right.  It really is about is this the best decision, and I don't think it is, so how do I support that?  Bottom line is, I cannot--it is far too important an issue this time.  In fact, if it goes as it has apparently been decided to go, then I will not only have to be a dissenting voice and say "no" on the vote, I will actually have to actively lobby against it, and find support for that other outcome that I think to be for the greater good.
The thought of that is not particularly pleasant; one does not usually engender friends when one goes against one's own professional group; the potential for backlash is present, at the least, some sense of ostracism.  But, perhaps I misjudge the others who may be able to see the issue more clearly rather than in narrow self-interest.  Perhaps I will gain new friends or new support from others who see it as being willing to step out of status quo.  That has happened to me before.  Of course, I don't do the work I do to make friends and be praised: I do the work I do because I think it is the right thing to do.  And, I think the right thing to do is consider the bigger picture here, and the numbers of people who will benefit from that approach as opposed to the limited number who will benefit from the narrow view.
All I know is when I go to bed at night and try to go to sleep, I want to know I have done the best I can for the greater good, the welfare of all of us, not just some of us.  I hope that will be enough tomorrow night when I try to go to sleep.
Posted by Suzassippi at 5:04 PM

I know what you mean. It's the patronizisng that gets to me. I think we all find ourselves in this particular situation time to time. Sometimes it's better just to plow right on and the h... with everyone else!

So...what was the discussion? What are you feeling alone in? I can just imagine what that was like. I hate to be patronized and what is even worse is when people think you are so stupid that they think you do not know that ou are being patronized.I am getting a reprieve from it but wish I could be there for you. I know it is hard.

Thanks to the both of you, my friends and social work colleagues. Yes, the patronizing part is annoying, but worse to me is the narrow thinking that is behind it. I realize this was a cryptic post, but I felt the need to express some feelings, and yet cannot disclose the particulars (which no doubt leaves you going "what tha..?") in order to protect agencies and individuals who are far more important than I am right now in this issue.

"you don't worry about that flat tire, so big ol' trucker..." now that is funny stuff. It is great as I sit in my cubical and laugh out loud, it makes the rest so angry to know I have such a wonderful time at work

Glad you have fun at work, cubicle or not. :)

I can so relate to being the "one who sees something differently than others." Makes me think of Si Kahn asking us in a group presentation how many of us had been "weird kids" and most of us raised our hands. :) I think it's both a gift and a curse to have that ability and difficult to figure out how best to use it when others seem to be in a different place. I suppose all we can do is honor our truth and speak up, even if our words fall on deaf ears. Not too satisfying, but sometimes putting it out there leads to a change down the road that maybe we didn't anticipate.