Biggs dropped by to see us last night.  He is a tour guide.  He told me about the Garifuna (pronounced gah-rif-uh-nuh) history (the free blacks who came ashore after being abandoned in the ocean by Spaniards during a storm back when this was still British Honduras).  His uncle, who died last year, was a famous singer who did much to preserve the Garifuna music, and I looked him up and listened to some of his music. 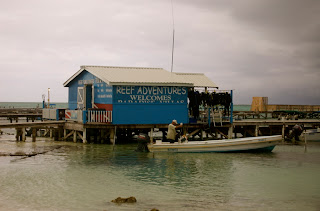 This afternoon, I noted that it was getting dark and stormy looking again, so went out to the beach to take a few shots. 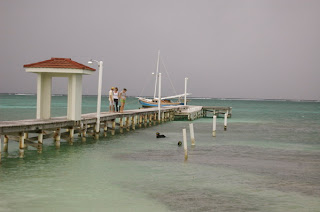 I enjoyed watching the two black labs diving off the dock and swimming to shore.  I tried to get a dive shot, and a running up the beach shot, but those guys were just too fast for me. 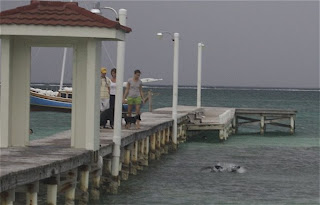 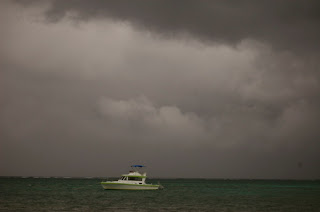 "Big rain coming!  Every body get inside right now!"  A warning from the staff at the villas.  I snapped off one more shot, and barely made it to the patio before it began to pour. 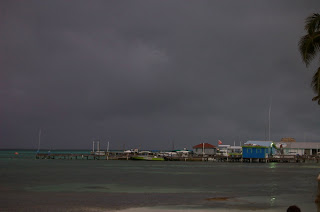 I sat on the patio and in a minute, Biggs came up, drenched.  He had spent the day bailing boats due to the heavy, heavy rains this morning.  We sat on the patio and visited until the worst of the rain passed, then he ran to catch a taxi to get home before they came again.  It is now pouring again, and has been for a while.
Kim and I were up this morning and dressed and about to leave when the rains hit hard.  By the time it let up enough, I was experiencing the "delights" of one week in Belize on my body and had to stay back for a bit.  I was home all morning, so took advantage of the time to do some work and was finally able to head to the school at nearly noon.
I had to stop at the store to pick up an item, and walked up the street instead of the beach.  The street (which is sand) was filled with water and I had to keep zig-zagging to miss the worst of it, and had mud all over my legs by the time I got to school.  It was a steam-bath by then.  I got the supplies together for "Bonita" and went to check on her.  Kim said they changed her bandage this morning and it is healing well.  Bonita was happy to see me, and happy for the two pencils with designs and an eraser that I took her, along with the gauze to take home for clean dressings.
Back to the office and documented, then told Kim I had to head back.  I needed fluid replacement!  I walked back on the beach this time, and stayed in the shade as much as possible but still had to stop twice, rest and drink water.  I went to the store and bought Immodium, chicken broth, and a Coca Cola.  After all three of those, I was much better and shortly after, Kim got home.  She had a really busy Monday and worked late as well.
I am taking it easy this evening.  I fed Raggy Ears and Pepe, the two cats who came up this evening.  (Yes, I got more cat food while at the store as we had none for them this morning.)  I had gotten items to make capillini pomodoro, but Kim has gone out so I have not decided if I will cook it for myself or just make some toast.  I stopped at the fruit and vegetable stand and got another gallon of fresh squeezed orange juice, along with the peppers and tomatoes.  I wanted eggplant, but the new truckload of vegetables is not due in until tomorrow, so they only had two left and they were small and too ripe.  I wanted to saute them with the peppers.  Alas, it will have to wait.
From San Pedro, Belize, good night.
Posted by Suzassippi at 6:12 PM