Belize it or not, I am here!

Waiting for Maya Air out to San Pedro Island. 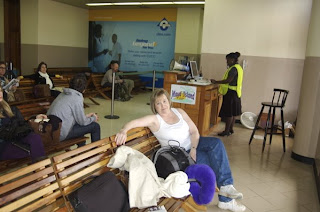 My seat UNDER the wing. 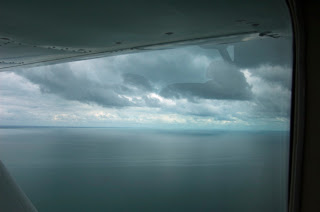 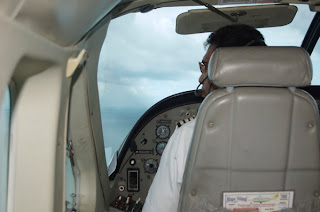 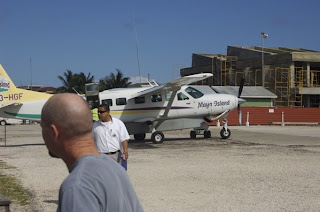 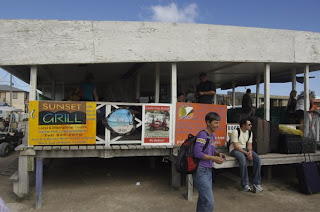 Kim waits in "baggage claim."  Baggage claim is this side of the chain. :) 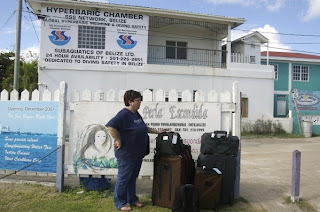 My view of the street from the back of my "taxi" -- a golf cart. 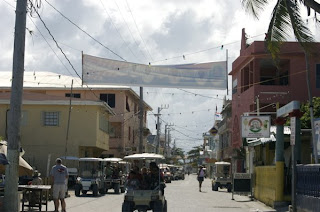 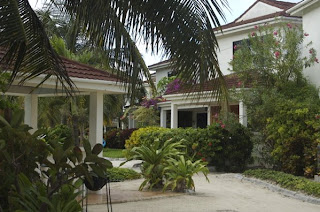 Playing in the ocean. 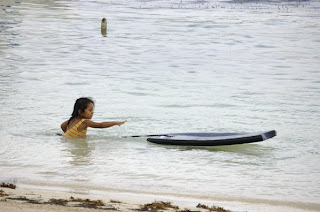 After perfect trip karma, Kim and I arrived at Belize right on time at 11:30, cleared customs and sailed right through security for Maya Air--which is a lot like Pen Air only with security.  There is no flight attendant however, and nothing between passengers and pilot.  In fact, passengers can sit in the co-pilot seat if they want to.  :)
It is absolutely beautiful here and I am in love with it already--so laid back and everyone is friendly.  We were picked up at the airport (which is only a 15 minute flight from the mainland, as I am on San Pedro Island off Belize, though we are still Belize) by our host, Fatima, who drove Kim and I to the condo (Paradise Villas) while Lelo followed with our bags.  A quick change of clothes into the coolest thing I could find, slather up the sunscreen and we headed over to Wet Willy's for some lunch (right on the ocean) and to watch the Ole Miss team win the Cotton Bowl.  (Yes, even though 94% of people said Tech would win, WE won.  And what was up with that nasty-tempered player for Tech who apparently has some real anger issues?)
I tried the local Belize beer, Belikin, which was pretty good, and I am not really a beer drinker.  I had the local catch in a fish sandwich per Kim's recommendation and it was good--though definitely different.  After the game, we walked up the beach where Kim ran into two of her good Belizian friends (when she hugged the security guard at the airport, some of our fellow travelers asked her if she was the mayor or something).  I met them, chatted momentarily, and begged off to come get off my feet and take some ibuprofen for my aching back after hauling heavy luggage all over three airports.  I am now kicked back on my bed, with the fans on, the windows open and the awesome breeze blowing in.  I found a lovely little South African chardonnay in the corner grocery, enjoyed my grilled tomato and cheese sandwich and am about to relax for the rest of the evening and hopefully get to sleep early.
Tomorrow is a rest and catch up day, plus walk around and orient myself a bit to the neighborhood which will be my home for the next two weeks.  We go to the school at 9 Monday to start our work and will be at the school from 9-3 M-F.  I am excited and thrilled about another new adventure, another new culture, and the opportunity to learn about things, places, and people I did not know.
I have wireless, but since this is an island, it is satellite, and I kind of feel like I am back on St. Paul (well, except for the part about lots of stores and more than one grocery store, not to mention 83 degrees instead of 43 :) and not sure how much I can upload pictures as things are pretty slow.
Hope you will be along for the journey for the next few days.
Posted by Suzassippi at 7:32 PM

Glad you made it with no troubles and it sounds like lots of fun already! Enjoy yourself and we will look forward to hearing all about your stay.

I am simply amazed at all your traveling. What are you doing in Belize besides laying in the sunshine by the pool?

Check today's blog and you will see!