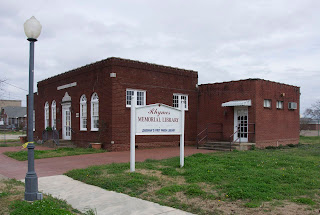 In the early 1920s, the majority of the Louisiana population did not have access to a library.  Through the Carnegie projects, that was remedied in many rural areas in the US, including for citizens of Mound Bayou, Mississippi.  The original Richland Parish Library, the oldest parish library in Louisiana (Dot Golliker, 1998, files.usgwarchives.net), was established in the old high school building (Luke J. Letlow, Richland Roots).  Lambda Kappa Club, a women's civic and cultural club, was instrumental in organizing the first parish library by applying for the Carnegie funds awarded to Louisiana.  The Richland Parish Library Association was founded in December 1925 and the first library opened in 1926 (Letlow). 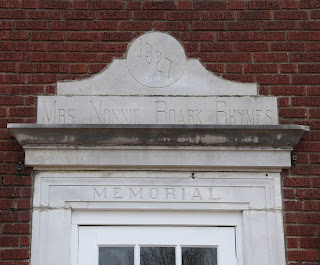 The building in these photographs was constructed in 1928, honoring Mrs. Nonnie Roark Rhymes, who served on the library board.  She died in 1927, and her husband, R. R. Rhymes, funded the brick building in her memory.  Outside of Orleans Parish, Richmond was the first parish library to be housed in its own building (National Register of Historic Places nomination form, based on research collected from the Richland-Beacon News by Innes E. Green). 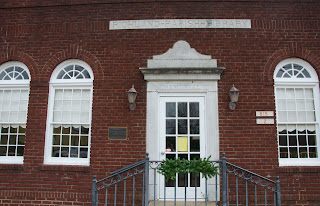 
...12 over 12 windows with semicircular fanlights, outlined in bricks and accented with keystones...cast concrete door surround with 'Memorial' cut into the top...Richland Parish Library in a linear concrete panel. (NRHP nomination)

The library suffered during the Great Depression--as did everything and everyone for the most part--and was threatened with closure in 1935.  Assistance from the state library (mainly in the form of providing librarian assistance and bookmobile) kept it going, and by the following year it was fully functional again (NRHP nomination).

The building has been altered twice; in 1948, the rear was extended to enlarge the one room building and a room added to the north elevation (left in the photograph).  In 1953, the room on the south (right in the photograph) was added.  The brick in the 1953 addition is lighter than the original, although the 1948 additions more closely matched original brick.  The architect and builder is unknown (NRHP nomination).

The building was in use as a library until 1971 when a new parish library was constructed (Golliker).  It was saved from demolition in 1989 and restored/renovated in 1991 by the Original Richland Restoration Society which formed in order to save the building.  Currently, it serves as a public meeting hall and display hall for art, particularly for local artists.

The United States Postal Service could take a lesson from the residents of Richland Parish, Louisiana, about the importance of saving--and using--historic treasures that belonged to the people who lived in those communities.

Posted by Suzassippi at 1:13 PM