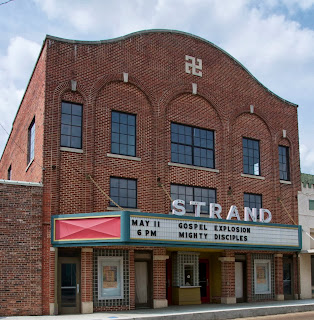 Yesterday over on Red Shutters, I posted about the beautiful and historic Ellis Theatre in Philadelphia.  Today, we visit the Strand in Louisville.  The renovation won the Mississippi Main Street Association Best Facade for Rehabilitation over $5,000 award for Belinda Stewart Architects. 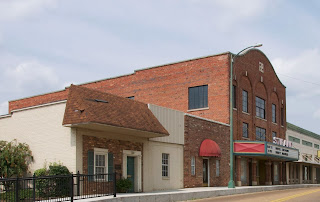 The building was constructed by Livingston & Wicker in 1927 according to the Mississippi Department of Archives and History, Historic Resources Inventory database.  The Winston County website identified it as constructed in 1923. 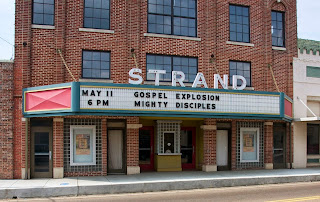 There are a total of six doors across the front elevation.  The doors at each side of the building led upstairs, and the two glass doors most likely to some type of office, or possibly a concession, and the doors on either side of the ticket booth to the lobby area. 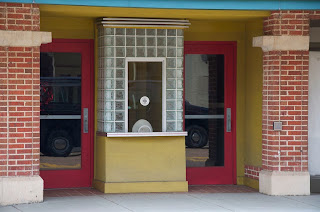 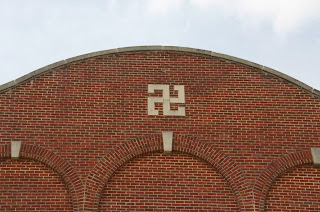 I was somewhat curious about the Swastika symbol, the equilateral cross with four arms, bent at 90 degree angles, although there have been variations in the placement of the arms.  It is a Sanscript symbol meaning "it is good", and was used around the world for over 3,000 years, as far back as 1,000 years BC (Rosenberg, n.d.), and antedates the adoption of it by the Nazi party of Germany in the 1920s.  It was originally associated with life, sun, and good fortune, but took on a negative association with the rise to power of Adolf Hitler in Germany.

I wonder how many theatres in the United States were named the Strand? What was the name of the theatre in your hometown?
Posted by Suzassippi at 9:23 PM