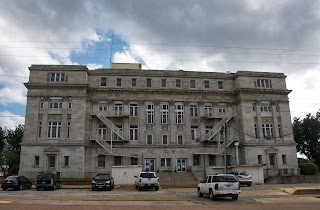 Back in 2011, I posted about the Stephens County Courthouse, in Breckenridge, Texas.  Last week as I was returning to Graham from Abilene, I had stopped off to take a photograph of the historic YMCA building and had parked on a side street.  Turning back around to get to the next stop involved going around the block, and I noticed--for the first time ever in all of my travels through this town--that the backside of the courthouse was very interesting and detailed, albeit of course less ornate than the front. 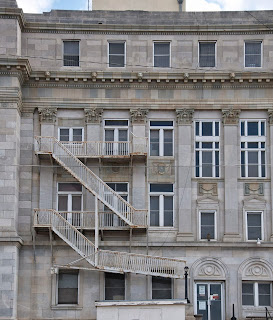 I wonder how often we miss the rear of a building--either from lack of access, or just assuming it is not worthy of a visit.  I did learn from E L Malvaney when I first started this hobby (architectural history and preservation) about the importance of going backside for important clues. 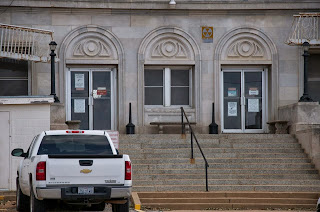 Architect David S. Castle of Abilene designed the courthouse, constructed in 1926, in a Texas Renaissance style--a combination of Classical Revival and Renaissance Revival with Texas elements.  The Texas elements are not as apparent on the rear of the building, but include the Texas state flag, and a Texas star.  You can take a look at the front elevation photos and detail for greater emphasis on the Texas details. 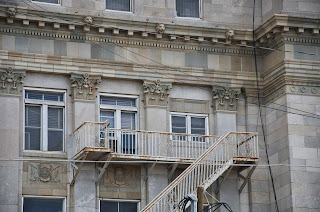 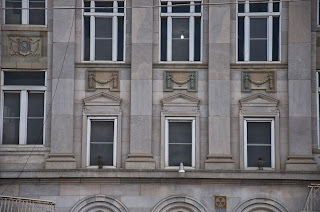 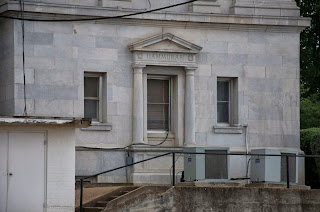 As are present on the front windows, the names of rulers are etched over the top of windows.  Texas Escapes refers to Hammurabi as the Egyptian "father of architecture."  I was unable to locate that exact term, but did find references that indicate Hammurabi was

Hammurabi, who was clearly a lot more famous for his code of laws, specified


If an architect builds a house which collapses or kills its owner, the architect shall be put to death.

I am going to speculate that since he was a ruler, and prolific lawmaker of strict laws, that he was more suitably dubbed the "father of architectural regulations."  Any Hammurabi scholars out there, or architects, please fill us in! 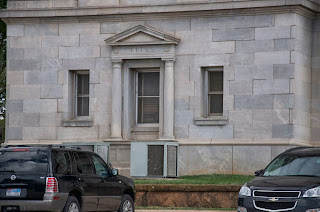 Titus was a Roman emperor, most noted during his short reign for his generosity in the provision of aid after the eruption of Mount Vesuvius.  Maybe he drew the back window because he had such a short political life.  On the other hand, one could wish that some of our leaders today also had a bit of a shorter run in the political arena--a little bit of some of them goes a long way.
Posted by Suzassippi at 12:08 PM

I have fond memories of this building! When I was around the ages of 8-12 I spent every summer with my grandparents who lived in breckenridge. At some point my grand father was a judge and my grandmother was. Probation officer in that building. I remember my grand father telling my there is a corner stone somewhere on the building that is something of a time capsule. I don't remember what he said was there but I remember it being near the back of the building. I spent a lot of time in the sheriffs office listening to the dispatcher talk with the officers.i remember her being an elderly red haired woman, extremely thin and she carried a shiny chrome revolver. Any way... My grand parents were very close with officer Jim reeves... Who later became sheriff reeves. It's funny how many memories these pictures bring back.thank you for posting them.

Glad you enjoyed them! Thanks for stopping by.