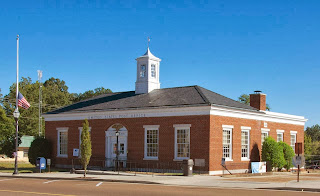 On the off chance that the Bolivar post office was built by a New Deal program, I stopped off on our September return from Franklin.  This Colonial Revival is a twin to several in Mississippi, so I knew I hit jackpot as soon as I saw it. 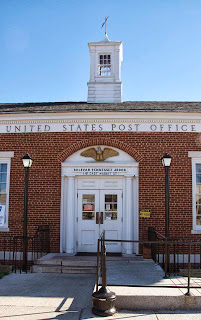 The golden eagle sculpture over the entry doors and the fluted columns are both trademarks of this particular style during that era. 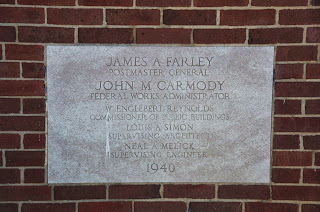 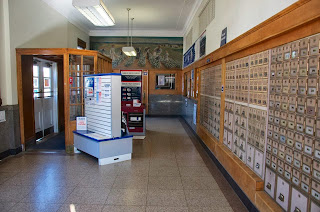 And, could I be so fortunate as to find a mural in the post office?  Why, yes, I could be so fortunate.  The interior retains its wooden vestibule entry like others of this design. 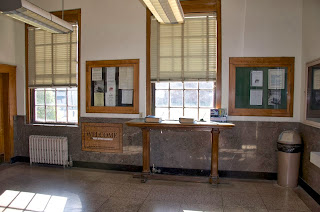 Marble wainscoting was another feature found in this era of post offices.

Carl Nyquist's Picking Cotton mural was installed in 1941, and covers the entire wall above the postmaster's door.  The mural is 13 feet 6 inches wide and 5 feet high--one of the larger ones I have come across in my search.  Apparently, little is known of Nyquist other than that he was living in Washington, DC at the time he painted the mural.  He was not a well-known artist, though his work was described in rather glowing terms by Hull:


The mural, a reflection of the long, flat cotton fields of the area, is an outstanding example of representational art, from the light brown earth color to the clothes the people are wearing.  When looking at the painting, one can see a row of low hills in the distance that forms a horizon line while closer up, pickers work at the never-ending task of filling the large sacks.  Rows of cotton plants march from back to front, providing a rhythmic beat to the composition.  Clouds invade the clear blue of the sky, mimicking the soft, white cotton.  In the right corner is a house fronted by two Lombardy poplars, and farther back there is a barn where two horses wait to be hooked to a cotton wagon nearby.

Eight people stretch across the field in various positions reflecting their endeavors, or, in two cases, lack of endeavors, as is evidenced by the young woman in the bonnet on the far left.  She stares into space, perhaps dreaming of another time and place, the cotton sack only an ornament at her side.  There is also a younger blonde girl on the right who isn't working.  She seems to have been placed in the painting to add youth and as a shape to balance the composition.  The only other woman in the picture works diligently alongside the men as they extract the cotton from the plants.

While the painting is well executed and enjoyable to look at, it may seem a bit misleading to some.  It is generally understood that people don't pick cotton from fresh, green plants.  The time appears to be more like midsummer than autumn.  Since the overall color system is predominantly on the cool side, the green, however, works better as a color for the painting, and that after all is what is important.

Hull continued that the clothing worn was a further indication of the historic properties of the mural.  He asserted that women still wore long cotton dresses in the fields in the early 1930s, the time of the painting.  He added that during the Depression years, people in agriculture were sometimes better off than others, and "entire families of small landowners congregated in the fields to harvest..."

A personal note here, none of the women in my mother's families were still wearing long dresses in the fields in the 1930s; Texas women working in the fields would wear men's trousers or mid-calf length skirts.  I will also note that even though my mother's and my father's families were "small landowners" raising cotton, they clearly were not among the 'better off.'  I recall Papa saying he waited in line with a shovel to dig ditches.  I suppose better off is relative, as they had chickens, cows, pigs, and vegetable gardens, and thus, at least had milk, eggs, and vegetables, with the occasional meat if you had enough extra animals to slaughter one--particularly a chicken which could be replenished easier than could cows or pigs. 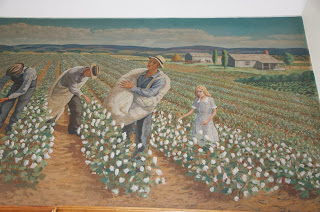 Carroll Van West, on the other hand, criticized Nyquist's rendition for other reasons.  He described the buildings in the background as tenant housing, and that while the painting is "plausible" it is also "misleading."  Unlike Hull, Van West asserts the portrayal is misleading due to race and gender roles.  First of all, Van West provided citation that 70% of Hardeman County farm operators were tenants, and that black farmers were twice as likely to be tenant farmers as were whites.  He further asserted that the Treasury Section officials asked him to verify there were white tenant farmers before giving approval.  He also indicates that the depiction of women was "problematic."

Van West points to the young girl being "well-dressed, with combed hair and no head covering--far from the reality of child labor in the cotton fields."  I can attest to Texas girls would have been wearing a wide-brimmed hat or bonnet, and long sleeves, particularly those who were blonde, while outside working. 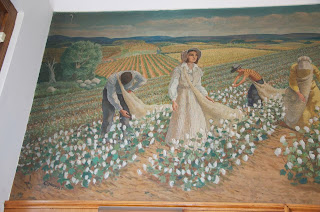 The adult women are shown as distracted and of little help to the men when the opposite was true: tenant women worked as hard in the fields as their husbands, brothers, or sons. 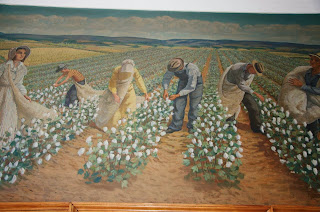 To give the artist his due, however, his mural is the only extant one in the South to show a white woman actually picking cotton.

I am thinking the truth might lie somewhere in between these two extremes.  I agree that the women, and the girl, would have been wearing protection against the sun.  Before "tan" became so important to women, fair-skinned women knew that sun produced freckles and wrinkles and it was avoided.

Apparently, Van West makes the case for tenant farmers with the Hardeman County statistics, and yes, all women worked hard in the fields--not just tenants.  My maternal grandfather was a landowner, raising cotton and wheat, and his wife, and his eldest daughter (my mother) worked in the fields alongside him, and in his place when he was able to secure outside work for wages.  Because the young woman is momentarily "daydreaming" can we assume she is of no help?  Perhaps she, as my grandmother did, looked to the edge of the field to ensure her children were still in the shade on the blanket, napping.  Perhaps she indeed sighed, and dreamt of a time when she might not be picking cotton.

What's your take on the mural?
Posted by Suzassippi at 6:09 PM

My family too were landowners as well as tenant farmers and I grew up on the stories of my grandmothers and great grandmothers hoeing cotton, picking cotton, and out and out destesting the stuff. My great grandmother would tell about having to patch everyone up at night so their hands wouldn't be swollen so they could get up and pick again tomorrow. The painting might be a little idealized, but it's not too far from the truth.

I have to agree with Mr. Hull that it is representational art, is enjoyable to look at, and it is well executed. I do have to think that the woman gazing into the distance might be reflecting back to the time when the earth was bare and being planted and there was concern if the crop would "make" - I would speculate that she is silently thankful for the white fields (even if the bushes are still green!).

The little girl reminds me of myself. One year when I was fairly small I remember being at my grandparents when a field of corn was being harvested. I walked alongside my mother as she picked corn, constantly being admonished to stay in the row and watch for snakes!

And there you go--sometimes we read more into something than might have been intended.

Carl Nyquist was a close friend of my father. He died when I was a child but have some distinct memories of him. I still have a carved painted horse from Sweden he gave me.

Carl Nyquist was a family friend. I remember him from my childhood. There was one of his painting hanging in our house. Carl and my father went on painting roadtrips together in the 1940s and 50s.