May is my favorite month in Mississippi 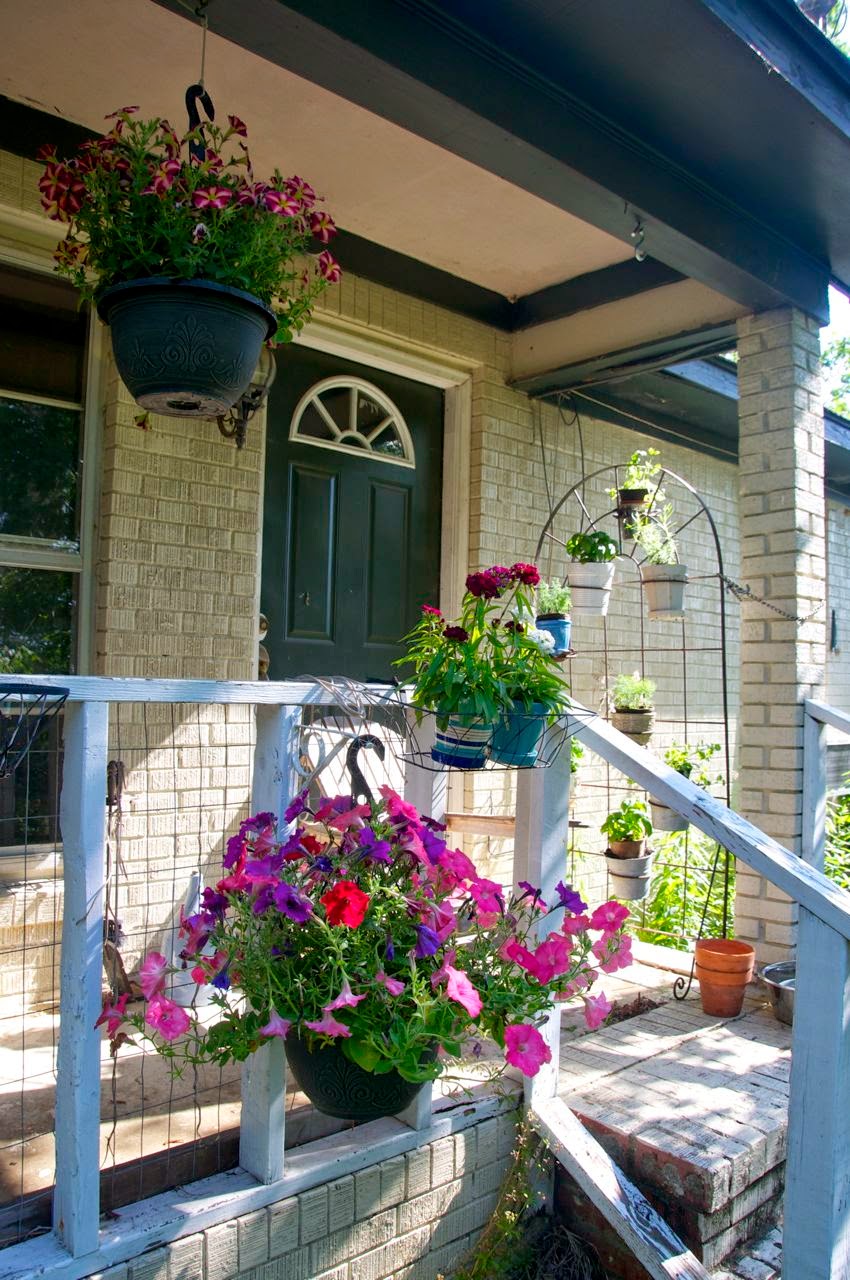 Last year I never got around to putting out flowers as I spent the several months in recovery from the knee surgery.  By the time I was able to do so, it seemed pointless as summer was almost gone.  Yesterday was a beautiful day, though, and I hopped in the car and went flower shopping.  It was quite the task to clean up the flower pots and pot the new ones, and I found myself running short of both potting soil and planters--seems that I have lost a few to breakage in the last year or so.  Looks like I will need to go shopping again today in order to finish. 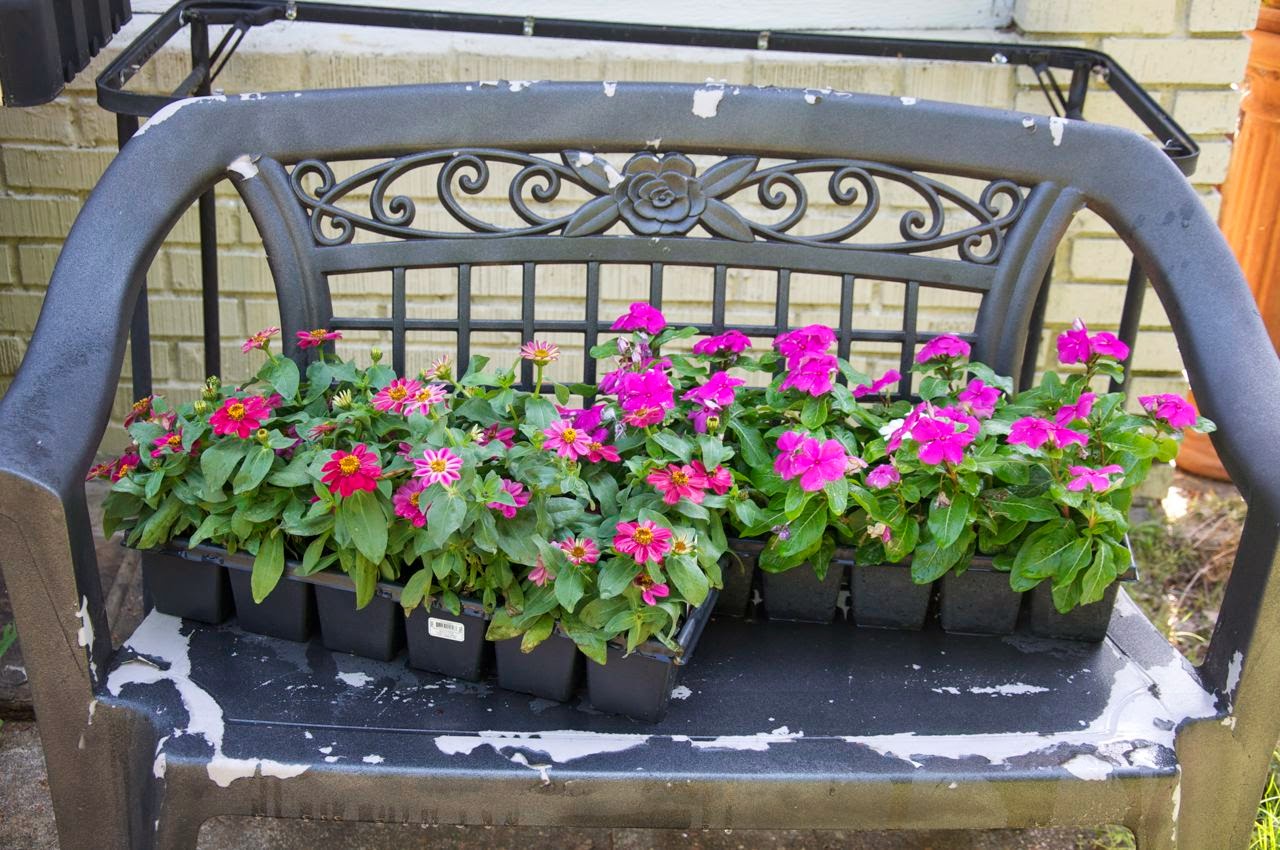 I have two large planters waiting for the zinnias and impatiens, but not enough potting soil.  One would think while I was filling up my basket with flowers and herbs yesterday that it might have crossed my mind that I would need a medium in which to plant them, but noooooo...... 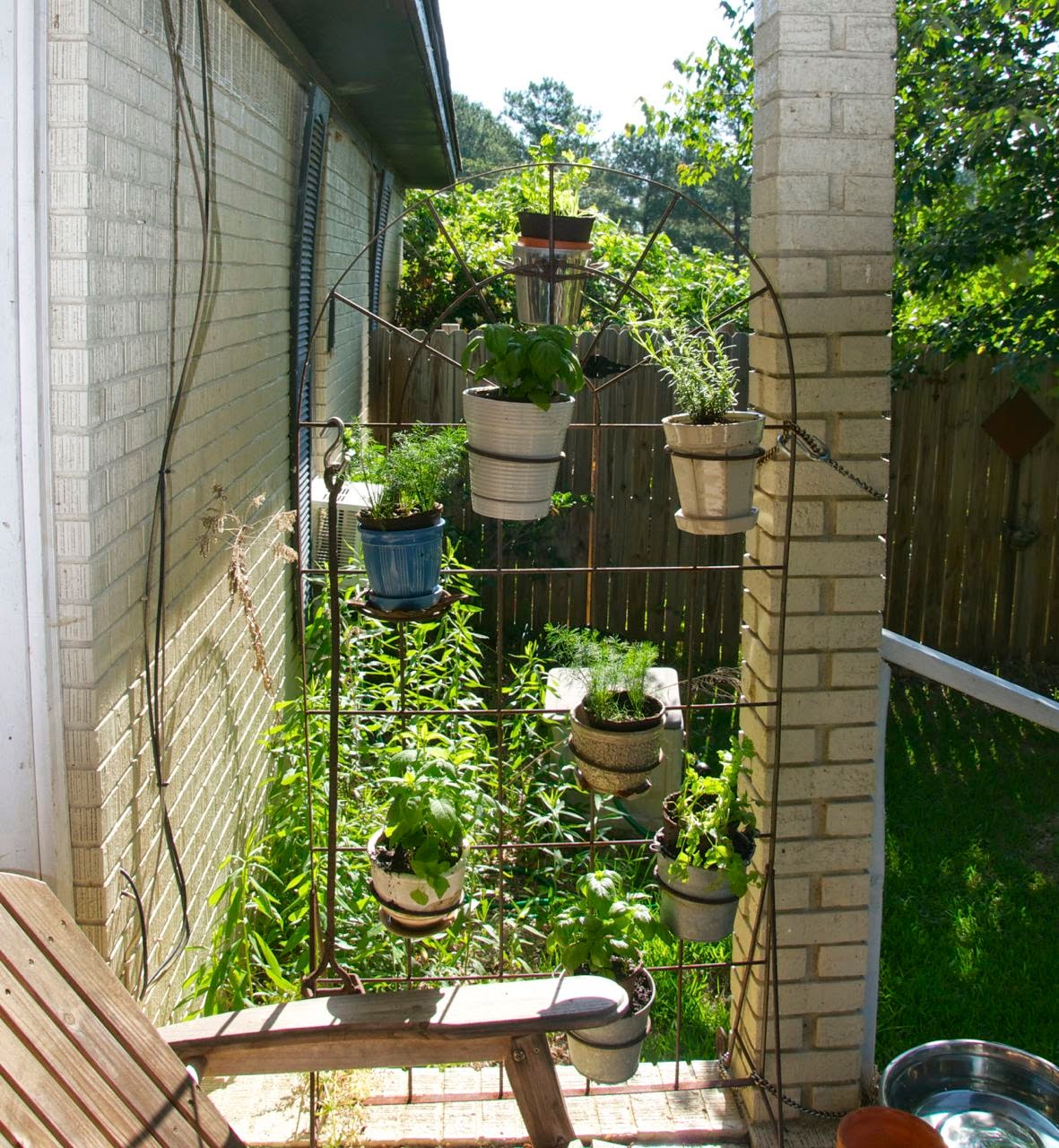 I love to be able to go out to the front porch and snip fresh herbs during my summer cooking.  I also bought some bee balm, which I have never used, but liked the sound of its name.  One is supposed to be able to brew tea with the leaves, and the plant produces a flower that attracts bees.  I already have more than enough bees in my yard due to the honeysuckle and the wildflowers that proliferate this time of year. 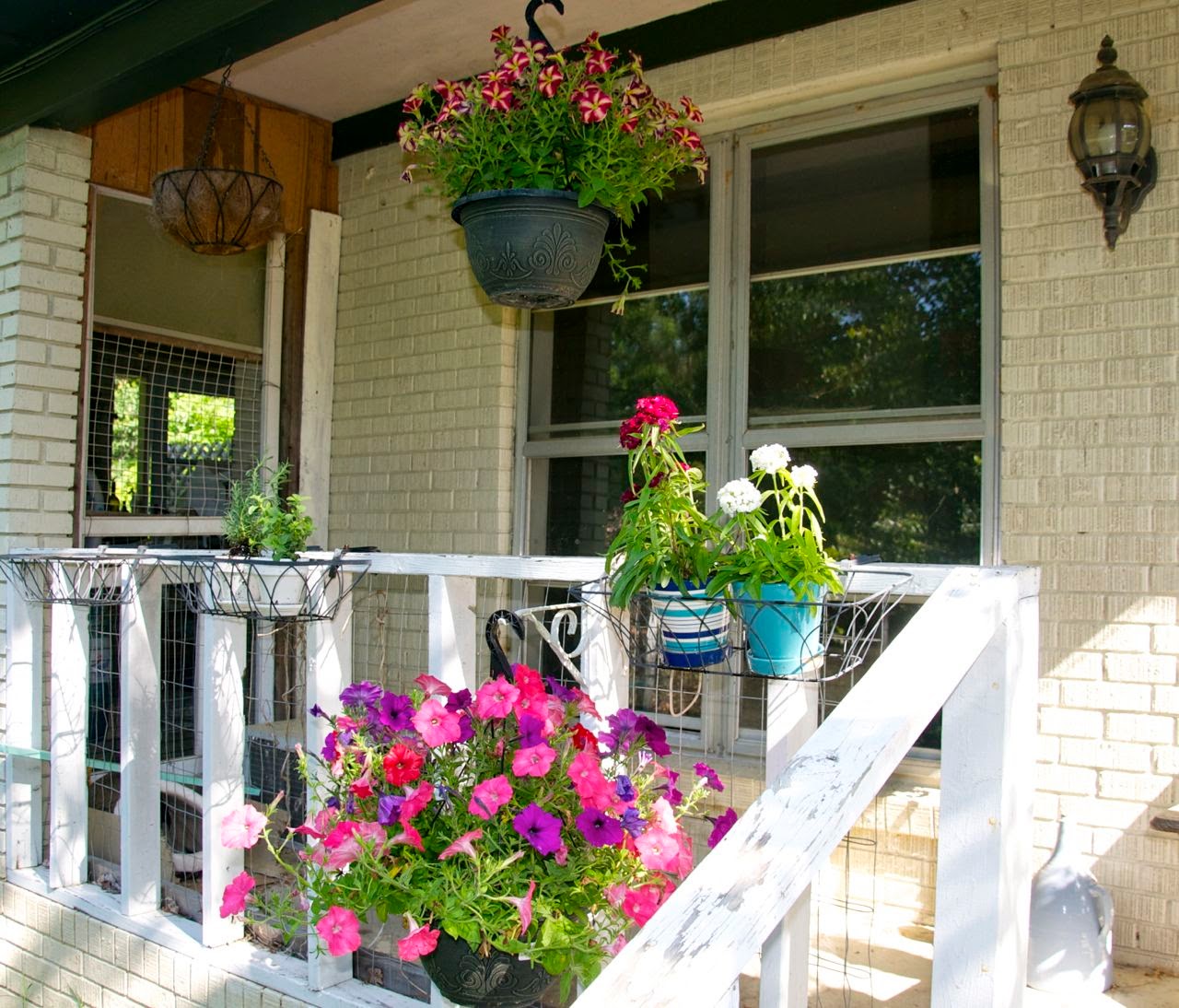 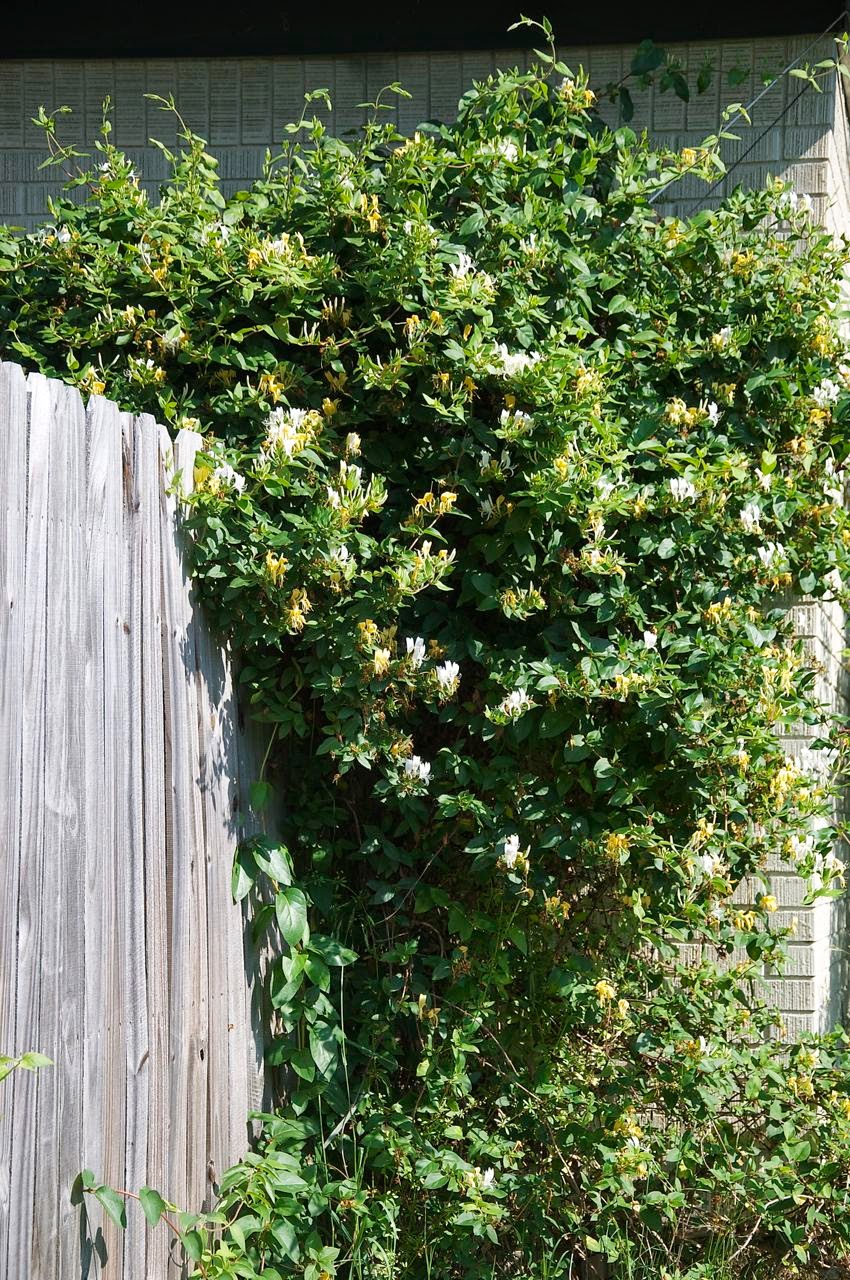 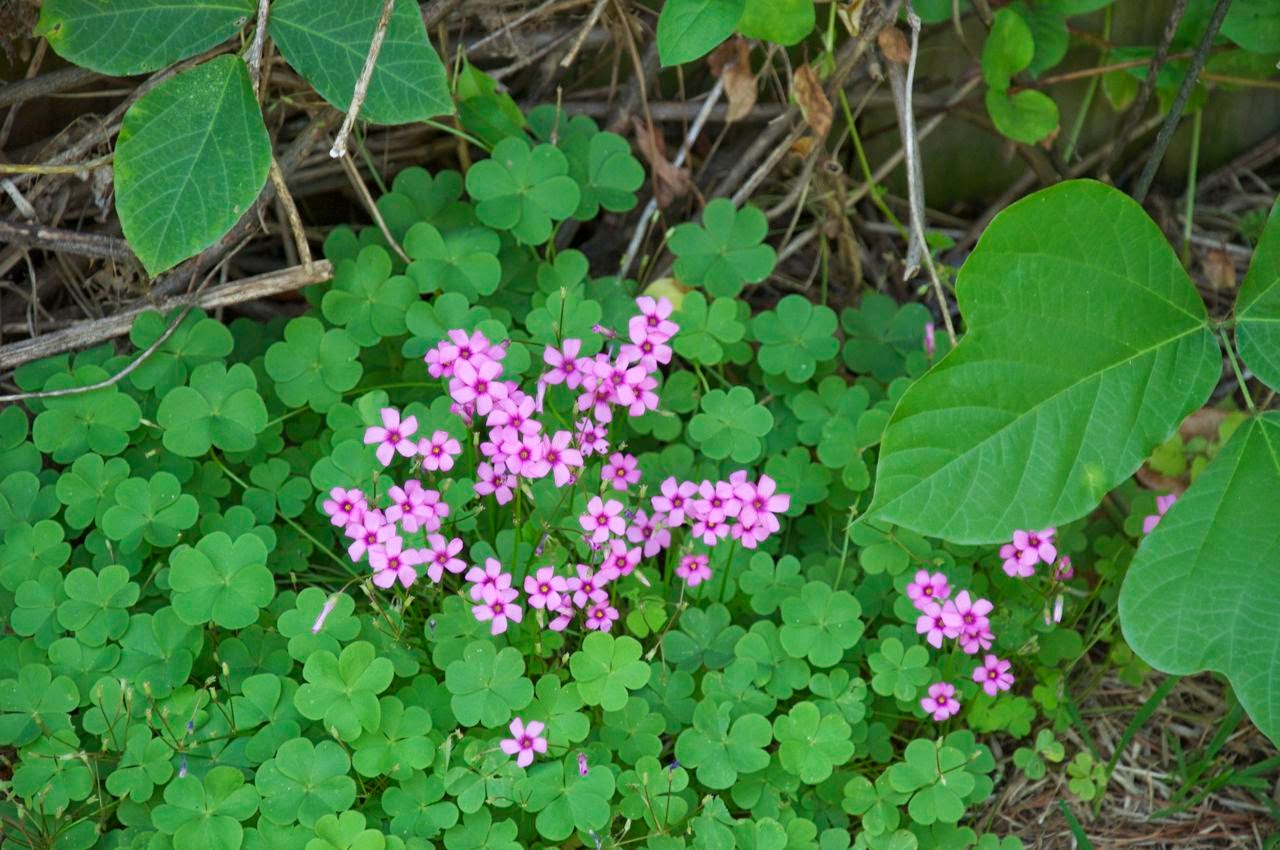 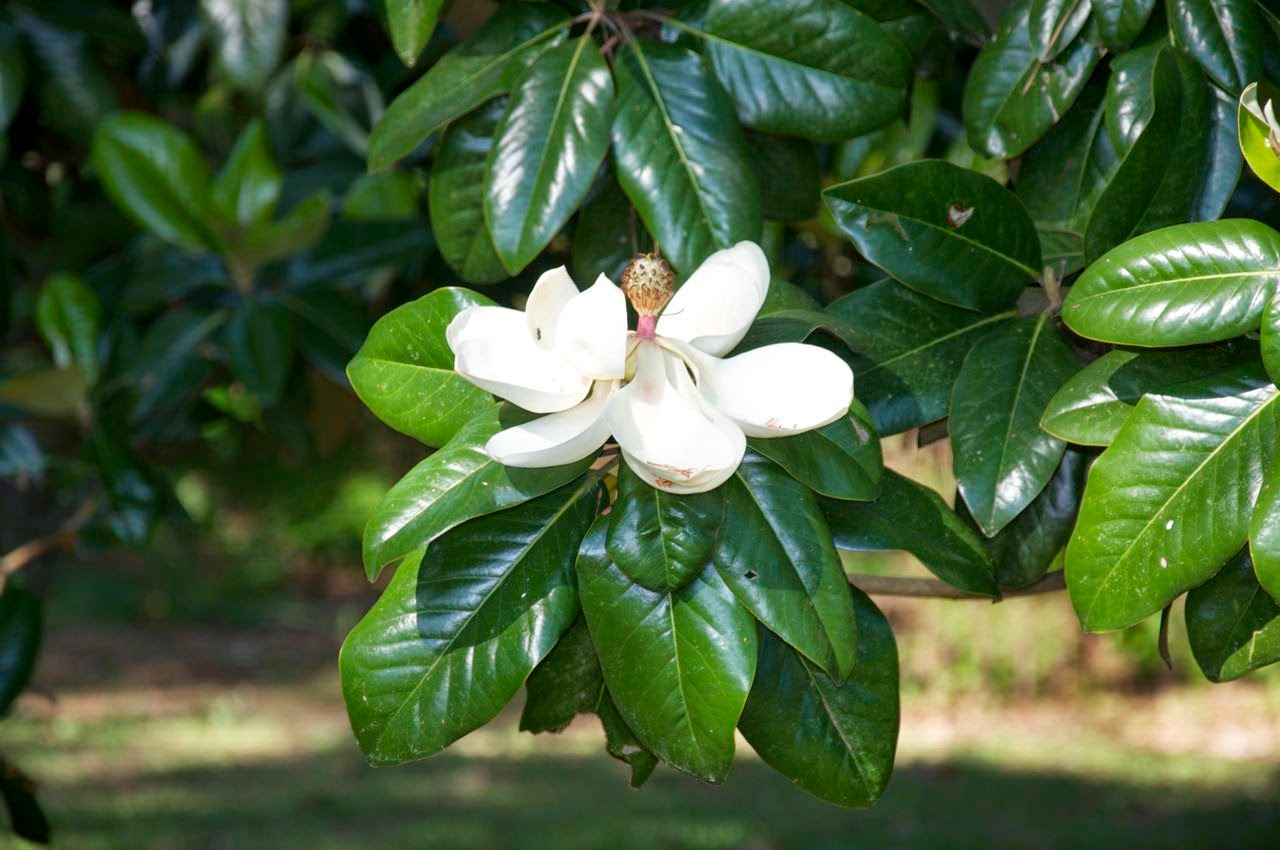 I noted the first bloom on the magnolia Wednesday evening as well.  I finally figured out how to feed the birds without luring them in for the cats.  I put the feeder tray inside a wire hanging basket.  It provides protection for the birds should the cats leap up from the ground (as I saw them do last year, and thus, stopped feeding the birds...but I missed them).  By hanging it on a smaller limb toward the outer edge of the tree, the cats cannot get to it from the tree itself.  Voila!  problem solved.
Posted by Suzassippi at 12:09 PM

I miss my feeder, too. The last time I had the oak trees trimmed I forgot to tell them not to touch the limb with the hanger on it, so now I have no low limbs to hang either a feeder or a planter. And, I always forget something at the garden center and then (tee hee) have to make a trip back (what a good excuse to get more plants :)). Wish I was in Mississippi to smell the magnolias!

May is a good Mississippi month. The days are warm but not humid, and the nights are comfortable. Your flowers are pretty in their hanging pots. I made an extra trip to store just for potting soil, never enough on hand.

I love to walk out in the yard this time of year, when the smell of honeysuckle and magnolias wafts across. In a couple more weeks, the gardenias will bloom, and then it is really an aroma-fest.

I got the rest of them planted, too!

Do you know the name of the small pink flowers? The ones with leaves that look sort of like clover. My grandmother had these all over the yard and I can't for the life of me remember what they are. Beautiful flowers!

I don't know their name, Lana. We had them back in Texas, too, and I think they are lovely. My son mowed them down yesterday :( but at least, he mowed.

It is Oxalis. I have a big pot in my yard and it is a faithful bloomer!

Thanks, Beth. Perhaps I should put mine in a pot, too, to avoid the mow-overs by those who do not appreciate blooming species in the yard. :)