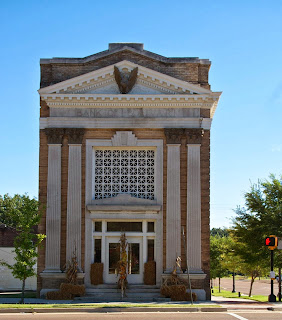 The historic Bank of Bolivar, Tennessee building dates from the late 1800s-1903, depending on which of the (very few) sources one uses.  The building was damaged during a fire in 2007 that destroyed the block between the bank and the post office.

Its most recent use at the time of the fire was home to the WMOD-FM station after the bank merger which ended the Bank of Bolivar's long run from its establishment in 1886. 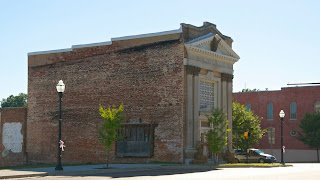 I surmised (I am a great surmiser) that the boarded window could have been a later addition of a drive-through window, but after learning the building next door had burned to the ground, I am thinking there might not have been space for a drive-through.  Maybe someone out there in Bolivar or Hardeman County knows the answer.  The building is part of the Bolivar Court Square Historic District listed on the National Register of Historic Places, but I have not been able to turn up the nomination form. 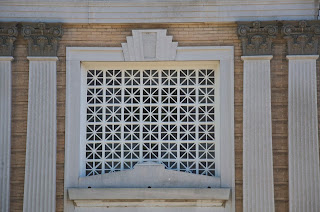