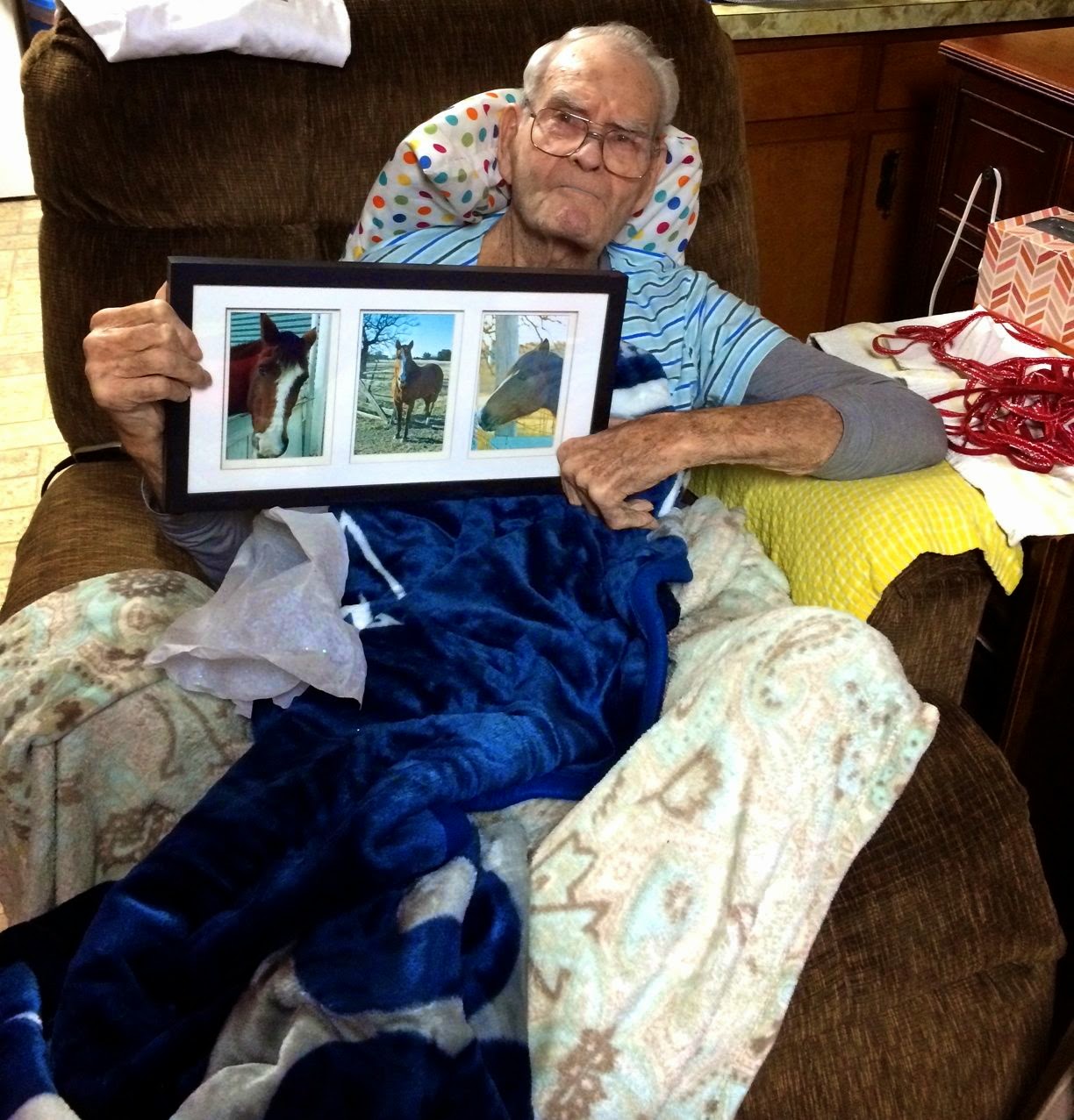 J and I arrived Texas last night at 7--12 hours after we left Mississippi.  It was an uneventful trip drive-way, pleasant at the gas pump (my 49 mpg Lexus was filling up for pennies since the most I paid for gas on the 3 fill-ups was $1.89 a gallon), and we actually had some pleasant camaraderie during the times one of us was not napping.

I had saved Mom, Dad, and Sis' presents and we brought them with us, so after dinner, we had a lot of fun as they opened presents.  In a last minute flash of inspiration, I had taken 3 of the photos of the many throughout the past couple of years that I have taken of Rio and put them in a studio mount.  The one to the left in the photo as we look at it was taken during Thanksgiving when we had just buried Jenny--Dad's little donkey and Rio's pal--and to me, Rio was crying.

Dad was moved, and throughout the evening, I would see him looking at the pictures.  He misses going to see Rio, and it was like having a little piece of Rio here in the house.  I think he was also moved because he knows the affection I have for Rio.

I went out as soon as it was light enough to see, and Rio was at the gate, waiting.  I think he knows when I am here.  I said hey to him and that I had missed him and was happy to see him.  He nodded his head up and down and nickered, as he does when I have said something with which he agrees.  It is his way of saying he is happy to see me, too.  I petted him for a second, and went into the shop to get his feed.  There was not quite enough in the food bin to fill his feed can, so I had to open and dump a new bag.  Maybe because it was cold (we are talking 26 degrees, and the wind blowing and gusting up to 40), but I could not get the string tape to give.  I couldn't find a knife or scissors (even though I just reorganized the tool bench last summer and know they were there) so I found a screwdriver to finally pry the tape loose and dump feed.  When I went out with his can of food and first handful he always eats from my hand--because dad always did that--I asked him if he was wondering what was taking me so long.  His answer was to head over to his food bin.

I had to break the ice in the water trough and then head to the hay barn.  By then, I realized I had made a mistake when I dressed for the chore, so I stepped back inside the shop and flipped my hood up and tied my scarf around the outside of the hood.  Someone had "cleaned out" the barn where he sleeps and eats his hay, but it was raked out and sort of piled right next to the barn door.  It is supposed to be cold (and windy) all week, so at some point, I just have to suck it up, dress as warmly as I can, and shovel it all down to the compost pile by the back fence.

Meanwhile, now I am listening to the wind blow, whipping around the corners of the house as it can only in Northwest Texas, one foot from the plains--or as the saying went, "nothing between here and the North Pole but a barbed wire fence."
Posted by Suzassippi at 11:54 AM

What a lovely thoughtful gift for your dad. I know he will enjoy it. There is a Ralph Waldo Emmerson quote that I love, "Riding a horse is not a gentle hobby, to be picked up and laid down like a game of solitaire. It is a grand passion. It seizes a person whole and, once it has done so, he will have to accept that his live will be radically changed."

I've come to love Rio so much! A picture is worth a 1000 words, so I can understand your Dad's enjoyment of the photos. And, that wind is blowing right from up there to down here tonight!

What a lovely gift--I have to chime in with the others and say I know your dad is greatly enjoying the photos. Stay bundled up and warm out there!

Hi, ya'll, and thanks for your words. Yep, dad has looked at the picture all day long and commented on it. I went out to feed again tonight, and had to break ice for the second time today. It is 20 right now and dropping, and we are laughing that it is warmer in Unalaska where it is a balmy 34. :)

Rio takes great photos. It's good to know your dad is enjoying your thoughtful gift. Happy New Year to you all.

Thanks, LindaRe! Rio is like Dad--a lot of miles of weather on him, but still enjoying as much as he can. They are a great pair!