Where is the only Federal courthouse to straddle the line between two states?

That would be Texarkana--half of the building is in Texas and half is in Arkansas.  I always wondered where the "ana" part of the name came from, and just learned it was because the original namer thought he was on the border of Louisiana as well, but he had missed it by some 30 miles. 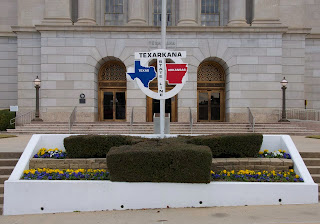 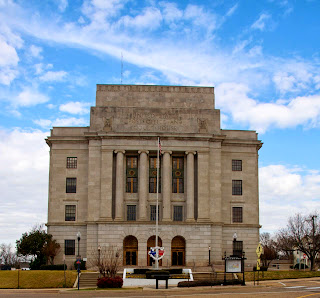 
…steadfastly Beaux Arts in design, the federal building is at the more austere end of the spectrum of its style.  (Arkansas Historic Preservation Program, www.arkansaspreservation.com)

The building has an Art Deco style trim at the top of the "service penthouse" (General Services Administration, gsa.gov).  Not only is it the only Federal building to cross state lines, Texarkana boasts it is the most photographed courthouse in the US, second to the Supreme Court in DC.  I am not certain how the statistics for calculating the photographing of courthouses is maintained, however, so cannot verify that claim. 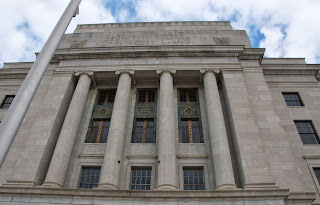 The building was constructed in 1932-1933 with a base of pink granite from Texas, and walls of limestone from Arkansas.  The post office is still located on the first floor of the building. 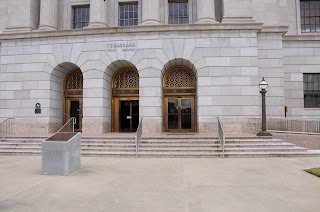 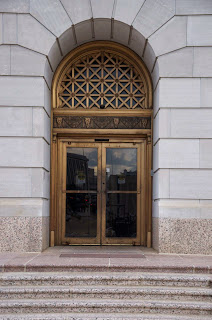 The architect was James A. Wetmore, acting supervising architect for the treasury department, assisted by Louis Simon who would later take over the job.  Wetmore was not an architect by profession--he was an attorney (GSA).  The project was funded through the Public Buildings Act 1926 at a final cost of one million dollars (Arkansas Historic Preservation Program).


Its design and construction, like other public buildings built in the early 1930s, was a part of federal construction programs that were designed to reduce unemployment during the Depression.

The construction of the Texarkana U S Post Office and Courthouse, like other federal construction projects undertaken during this period, provided unemployment relief during the Depression.  During its planning and construction, the federal government expanded its public buildings program.  The appropriations allotted under the 1926 Public Buildings Act were increased in 1928 and again in 1930 and 1931.

In 1931, the Federal Employment Stabilization Act was passed.  This act permitted the President and Congress to authorize additional appropriations for construction projects in order to facilitate employment.  These pieces of legislation established a trend in public works projects that led to the creation of the Public Works Administration (PWA) and Works Progress Administration (WPA).  Although not directly part of the so-called "alphabet" New Deal programs, the building's construction, like other public buildings built in the early 1930s, was part of the government's efforts to combat growing unemployment. (Arkansas Historic Preservation Program) 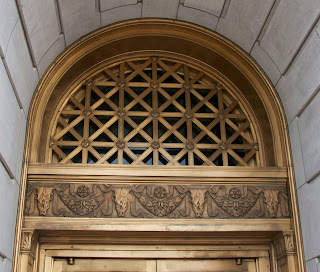 One architectural firm who benefitted from the project was Witt, Siebert, and Halsey of Texarkana, who designed the building, in association with Perkins, Chatten, and Hammond of Chicago (GSA).  The original structural engineering drawing was by R. D. Jameson, and the mechanical engineer was R. F. Taylor.    Gauger Construction of Memphis, Tennessee built the courthouse (Arkansas Historic Preservation Program).

E. C. Siebert would later leave the firm to start his own business, and while mayor of Texarkana, designed and supervised construction of the Miller County courthouse.
Posted by Suzassippi at 10:18 AM

Very interesting. Now you have inspired me to go visit the courthouse. I will have to place my camera tripod such that it straddles the border.