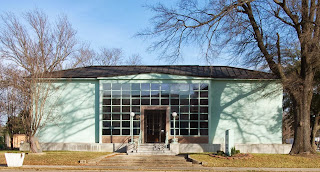 The former post office in tiny little Crossett, Arkansas was described as 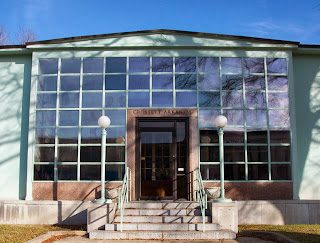 I get the International style, with the expanse of glass, the squared granite trim on the entrance, the primarily squared, flat fronted building, and the use of stucco...but I am not seeing that Greek Revival, unless it is the tiny little pediment at the top of the entrance--the only non-flat, non-squared, non-rectangular aspect of the building.  And, perhaps that the glass fronted wall sort of emerges from the rest of the building sort of like a portico? 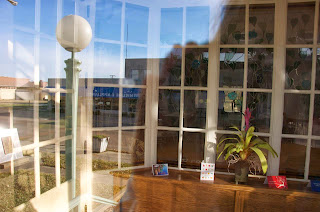 A peek through the entrance reveals the original wooden vestibule is still in place, and these were common in the Colonial Revival and Greek Revival post houses I have seen through out this area.  Perhaps there were other elements in the interior that reflected Art Deco and Greek Revival. 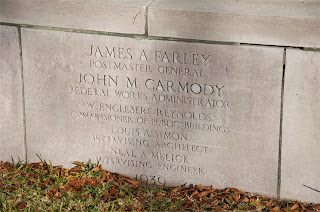 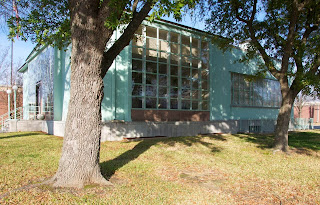 The Crossett Lumber Company donated the land for the new post office and wanted it to "reflect new progressive ideas."(AHPP).

When construction was completed in 1940, Crossett reveled in the addition of the 'pleasing green' stucco building that was designed using a combination of Art Deco, Greek Revival, and International architectural styles. (AHPP)

The building cost $70,000 and was finished and dedicated in August 1940--roughly the same time as the lumber company strike of 1940 was polarizing the town, so there may have been less 'reveling' and more revolting going on in some parts of the community.


In terms of design, this is a building built decades ahead of its time.  The Crossett Post office was, and still is, a jewel hidden in a small town in Southeast Arkansas. (Old Crossett Post Office named to National Register of Historic Places, Ashley County Ledger).

The building housed the post office until 1968 when it was sold by the postal service for $1 to the city for use as a public library.  The library was housed in the building until 2002, and now is home to the Crossett Economic Development Foundation.  The building is still a "pleasing green." Perhaps that was the nod to Art Deco?

It really is a jewel! What a unique design and so pleasing to look at!

I know--it may be my favorite so far!