All the mid-century modernization of store fronts in towns I have been visiting lately made me think about the Perkins-Timberlake store in Olney, Texas, where we shopped throughout my adolescence in Graham.  Perkins-Timberlake had nine stores in Texas (including one in Seymour where I lived as a child) and one in Fredericksburg, Oklahoma.  While I really don't remember the Seymour store clearly, or shopping there (we shopped in Bickley's Department Store and Woods' The Man's Store), I seem to have a dim memory of its location in downtown.

Joe J. Perkins opened his first mercantile in Decatur, Texas in 1897.  He

It was actually not "soon" as I think of soon, as it apparently was not until 1914 that the store became Perkins-Timberlake instead of just Perkins.  Frank Timberlake began his apprenticeship as a merchant in the Perkins store in Jacksboro in 1914, although he had married Perkins' sister in 1886.  Timberlake took charge of the stores in Vernon, Texas and Frederick, Oklahoma soon after, and in 1915, managed the stores opened in Electra and Bowie (both in Texas).  In 1916, a large new store was opened in Wichita Falls, Texas, which became the headquarters of the company. (Source: Capt. B. B. Paddock, Ed. (1922). History of Texas: Fort Worth and the Texas Northwest, Volume 3. Lewis Publishing Company: Chicago and New York, p. 351). 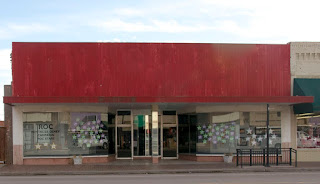 This was the location of the Olney store since my childhood.  It was apparently a newly "modernized" storefront after the tornado of 1951 destroyed the original store.  According to the Daytona Beach Journal, May 19, 1951,

During my childhood and adolescence, another building was to the left of the building in the photograph--the significance of that item, in a bit.  The red metal slipcover was (in the best of my memory) a silver color, and I am not sure when it was added.  The red color interferes with my memory of the store, and while I do recall a sign across the front of the building, I don't remember if it was on this slipcover, or on the brick itself, and I can't find any supporting data one way or the other. 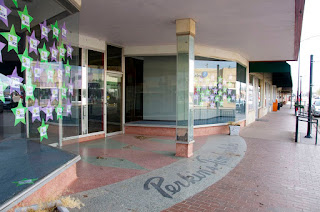 Terrazzo flooring began to be used in the first part of the 20th century (Carol J. Dyson, Mid-Twentieth Century Storefront Components Guide, Illinois Historic Preservation Agency).  A modern version of the earlier practice of spelling out the organization's name in mosaic tile, the terrazzo floor could do fancy script not possible with tiles. 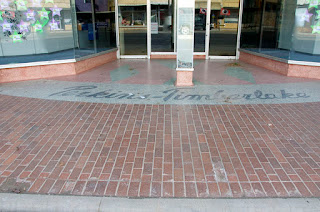 As a child, I was fascinated with the script spelling out the name, and was particularly enamored of the mirrored column in the center of the entrance.  Notice how the green diamonds in the terrazzo draw you toward the doors.  Dyson indicated that the angled entrance and other details (such as the diamonds) were all intended to sweep the customer into the store.  A door in each of the showrooms enabled the employees to enter the windows to change displays. 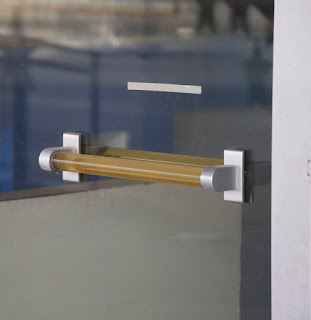 These door pulls appeared to be made of glass also (both by feel and visual inspection), although I recall their being clear, rather than the yellowed color.  I am not certain if that is a memory trick, or if perhaps they were made of some type of resin which yellowed with age.  I do remember that the door handles fascinated me as a child as well. 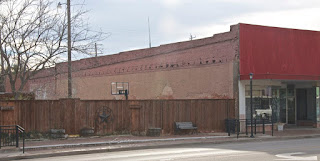 In the photo above, you can see what was not visible to me as a child.  Because another building abutted this one, I was unaware of the details of the building itself.  I speculate that after the 1951 tornado, the decision was to modernize in rebuilding, and the metal or aluminum slipcover added.  There was most likely a sign and my guess is that it was aluminum letters. 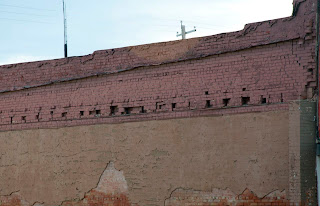 And just think, as I was in that store the summer of 1968, using part of my first paycheck from my summer job to buy a yellow knit Polo-style dress and some brown and tan chunky heel spectator pumps for college in the fall, I had no idea of any of these things that are so fascinating to me now.
Posted by Suzassippi at 4:29 PM

Enjoyed the tour--cool storefront! I'll bet you're right about those handles being a resin of some sort. They probably wouldn't do glass for saftey reasons. Still cool though!

I grew up in Electra and remember the store we had there. Thanks for sharing your story.

Thank you, Mattie! I actually had to ask my mom about the Perkins store in Seymour and then looked it up on Google maps. I was always in and around Electra, but I really don't recall the town specifics.