When cats compromise for the good of the group 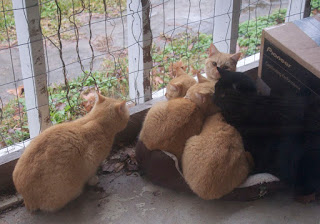 I was working in the living room this afternoon so Abby could be out of her kennel--we had an unexpected weather day off due to the ice.  She was alternately chewing on toys, coming over for a quick pet, and snoozing, when I looked out the window and began to laugh.  Feral cats, or at least the ones who hang out around here, seem to weather the winter fine.  I always put out some type of shelter for them, and some of them use it, but several obviously have little lairs out in the kudzu somewhere as they only come up at feeding time.  A few weeks ago, I put out a cardboard box (a little trick I learned from a friend back in Texas) with 2 small openings (feral cats like an alternative escape route if necessary), and moved the kitty bed to the front porch now that it would likely rain and/or snow and ice.  I had seen two of them curled up in the kitty bed several times now, which is not all that unusual. 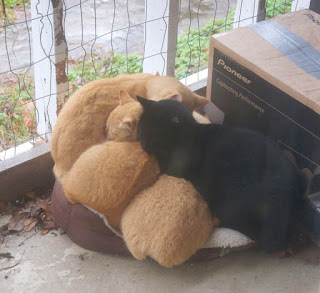 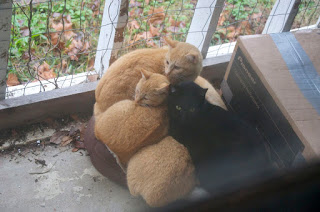 While cats may tend to be independent sorts, when it is cold, they depend on each other as they need each other.  You can be a warm cat in a pile, or a dead cat all by yourself, due to freezing. 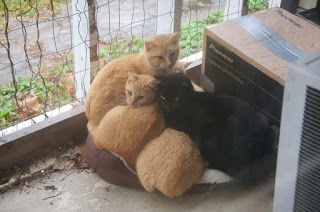 Now, if only our elected representatives could figure that out, we might get some things accomplished.
Posted by Suzassippi at 5:37 PM

Ahhhh, love the kitties! And they could definitely teach a thing or two.