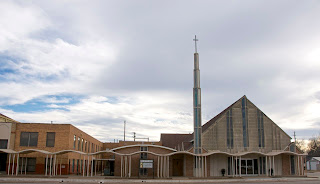 Olney's First Baptist church is an example of mid-century modernism.  I have to wonder how many folks in this small north central Texas community were astonished as this building began to take shape. Who loved it, and who hated it?  I guess I won't find out until my retirement gig, when I will travel around to all the local town libraries and search out local documents that might shed light on questions. Facing along Main Street, a couple of blocks from "downtown" is a contrast of angles and curves, concrete and glass, and a dainty little row of lally columns. 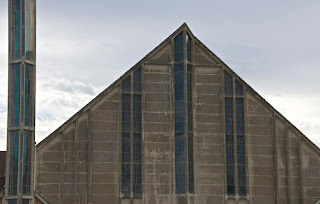 The gabled end of the sanctuary is concrete, which gives the appearance of being rougher than it actually is.  The primarily blue-green stained glass has a dark red and orange-yellow pieces near the edge.  The three windows have a cross shape design.  One sees the repeated pattern of threes throughout the building. 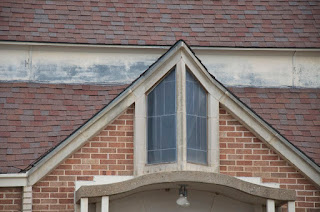 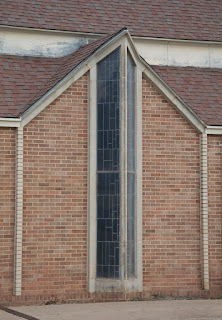 A row of projecting windows lines each side of the sanctuary. 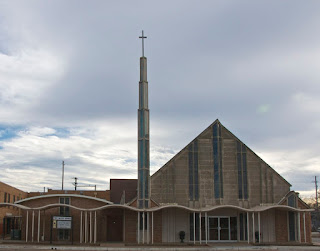 The covered archway along the front has a scalloped style of awning, and the supporting columns are grouped in threes.  The spire that rises has three tiers. 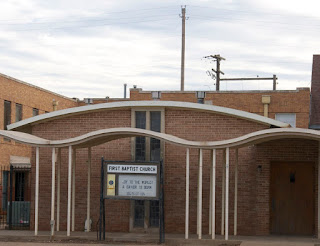 The section behind the archway is most likely a chapel, and the window design is similar to those on the sanctuary, though simpler.  The slightly vaulted roof curve provides an interesting contrast to the alternating curves on the archway. 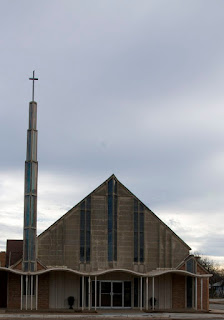 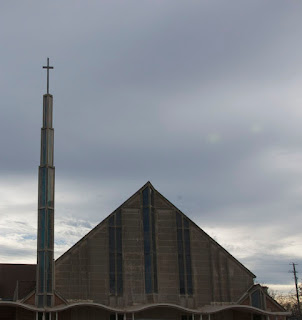