New Jersey artist Avery Johnson was asked to paint the mural for the Lake Village post office.  Johnson accepted, but his winning entry in the 48-states competition delayed the Lake Village mural.  It was completed and installed in 1941, after the post office was constructed in 1939 (Smith & Christ, n.d.)  The scene depicts wildlife on the shores of Lake Chicot, the largest natural oxbow lake in the United States (Silva, 2011).  Johnson was said to have been interested in the abundant deer population of the area, and thus, deer figured prominently in the work (Smith & Christ).  They described the artistic  requirements of the program:

The subject matter requirements included:
Johnson received six commissions for murals during the program, but Arkansas was the only one in the south (Smith & Christ).  Relief work for artists during the New Deal period was housed in several programs and federal offices, and was relocated in 1939 (through its conclusion in 1942) with a reorganization moving the Public Buildings branch and the Section into the new Federal Works Agency.  The 48-states competition to award one mural to each of the states was announced in 1939 to promote the program. 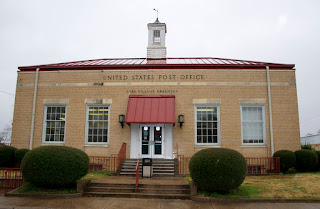 The Lake Village post office is in the Colonial Revival style, popular during the New Deal era.  This design, or similar versions, is seen in the Mississippi post offices in Leland, Houston, Amory, and Pontotoc.