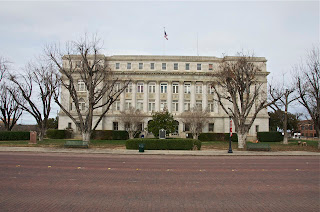 The discovery of oil in Breckenridge in the 1920s meant they needed a larger courthouse.  This Texas Renaissance style courthouse (a combination of Classical Revival and Renaissance Revival with Texas elements) was completed in 1926.  The building is constructed with limestone, and the streets that run through Breckenridge are still the original brick.
The architect was David S. Castle of Abilene.  Castle was known as the "Architect of Abilene" and would come to "dominate architectural design in the Abilene region for the first half of the 20th century."  He designed a number of office and commercial buildings in downtown Abilene, including the beautiful and historic Paramount Theatre, the Hotel Wooten, the Windsor, and buildings at all three Abilene Universities.  One of Castle's designs was the Sandefer Memorial Administration Building, where my office was located when I first joined the university faculty. 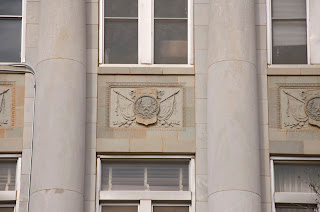 The "Texas element" in this example is the use of the Texas flag (the one on the right with the single star--thus the nickname the Lone Star State) and the Texas star in the center of the shield. 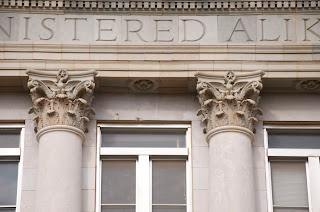 The Texas star is repeated again in the design at the top of the columns. 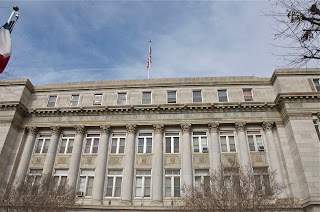 Frankly, I have to confess to a certain amount of cynicism about all the pithy equality and justice sayings displayed over our courthouses and other public buildings. 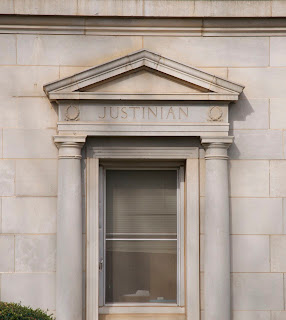 One of our friends refers to our son J as Justinian.  I am going to shamelessly display my ignorance here and admit that I always thought he was just making fun and mocking (which of course, he was) but did not realize there really was a Justinian.  Other than the fact that the original was an emperor, I don't see much resemblance between the two.  J just assumes he should be in charge; frankly, given the mess the corporately elected officials are making these days, I can't see how he could do any worse.
Posted by Suzassippi at 6:09 PM