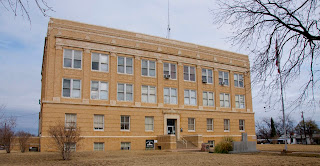 The original county seat of Callahan County was in Belle Plain, a few miles south east of Baird.  When the train laid tracks through Baird instead of Belle Plain, that settlement was doomed.  In 1883, the county seat moved to Baird, and "noted architect F. E. Ruffini" built the first courthouse.  As the county grew, "another noted architect, J. Riely Gordon" was hired in 1900 to design a larger courthouse.  You can see J. R. Gordon's courthouse here (note: you have to scroll down several photos to see Gordon's courthouse).  J. R. Gordon also designed the state capitol of Arizona, along with 15 Texas courthouses, including the Bexar County courthouse in San Antonio.  The supervising architect for Gordon's 1900 courthouse was J. E. Flanders of Dallas, who designed a number of other Texas courthouses, including Shackelford and Stephens county courthouses. 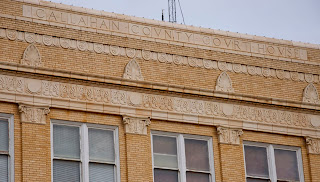 The current courthouse, built in 1928, was by Voelcker & Dixon of Wichita Falls.  They were the architects of Jack County courthouse.  The building "features intricate detailing, including acanthus leaves, rosettes, medallions and cartouches." (Texas Historical Commission)  THC refers to the courthouse as both Classical Revival and Texas Renaissance in records.  Texas Renaissance style was a dominant design from about 1900-1930s.  It combined Renaissance Revival, Classical Revival, and Italianate to form a style that is "Texas in origin."  The dominant feature of Texas Renaissance is the Texas elements that form parts of the building.  Other than perhaps the eagle on the corner, I don't see a lot of "Texas elements" in the Callahan County Courthouse, but a great example is coming up "a couple of towns over" so stay tuned for more courthouse posts! 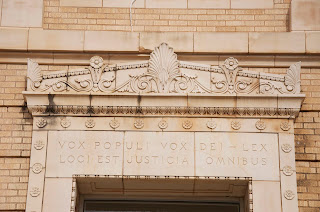 "The voice of the people is the voice of God; the law of the place is justice for all." 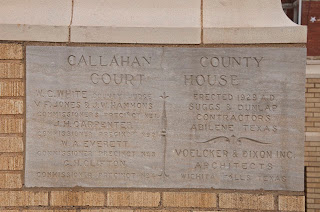 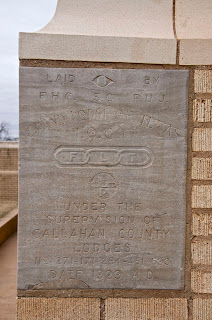 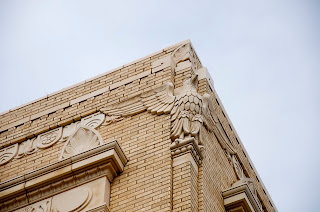 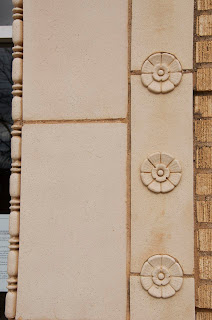 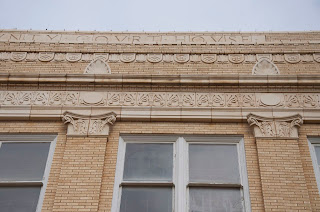