Gordon Gecko has moved to Belize

After dropping Kim at the school yesterday, I decided to tour the north side of the island.  It is an astonishing array of new condos, more new condos, and then some new condos.  It seems impossible that a tiny island could need that many condos, but Butch says it is great for their business (those who cater to the tourists).
One new development is across from the school.  The school asked for the continued access for the children to walk from the toll bridge to the school building, but the developer denied it.  He wants to build a big fence that will shield the view of the school and the village of San Mateo from the eyes of the people who will buy those condos.  Without the access, the children have to walk up the edge of the "cut" from the ocean to the lagoon and across those wooden planks over the sewage water.  Ultimately, the local government ruled in behalf of the school and not only granted access, granted the land to the school. 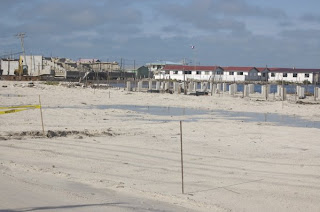 The really interesting thing to me is right at the point where you walk in front of these new condos being built, it smells so absolutely horrid from the sewer water in the low lying area of the lagoons.  I asked Butch last night as I was giving him a ride home how they ever thought they would sell them.  He said they are already sold, based on the marketing.  Kind of interesting:  they will get here to their new condo where they have been told they can fish off the balcony, and it will reek of a sewer and they will be fishing from a sewer. 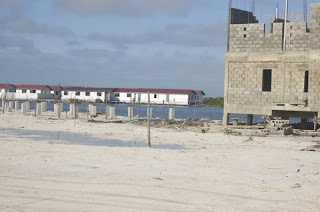 All along my drive, it was scene after scene of workmen building more condos--on the beach side and on the lagoon side.  Once you get away from the village, though, the lagoon is cleaner and can be quite pretty. 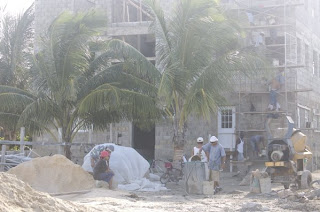 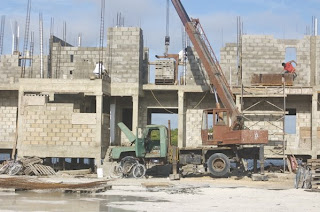 They use these palapa palms to support the concrete while it is drying.  It is quite bizarre to see a building with the total inside covered in palapa palms. 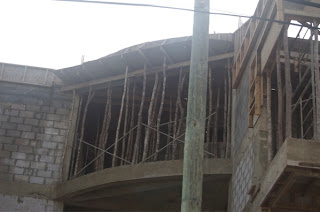 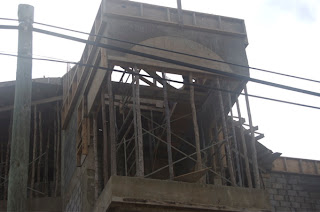 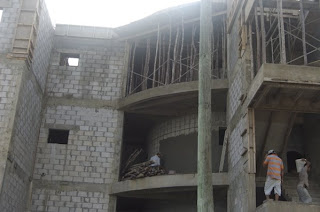 Further on up the beach back to AkBol to check and see if the keys Kim found in her purse were Marlin's.  I kept saying I had a memory of seeing them on the bar at his place.  Sure enough, they were his.  He said he had asked Kim to hold them for him as we were all driving home from there Saturday night and then forgot to ask for them.  He was quite happy to see them. :)
Since I was there, I ordered breakfast and sat on the beach and ate while writing in my journal.  Two dogs came up--beautiful bird dogs, but one had a lab looking face--and sat patiently while I was eating.  I learned a valuable lesson.  If you want the picture, take it first. :)  After I finished, I gave them each a bite of fry jack, and once the food was gone, so were they.  They were very dainty in taking the food from my hand, though, unlike my own dogs at home.
After that, I walked up the beach a ways, just looking at the unusual things that wash ashore:
A palm root. 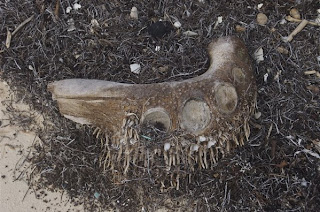 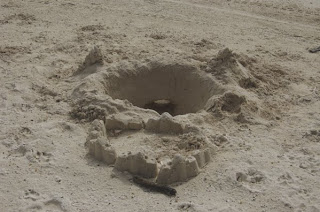 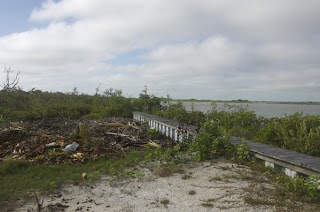 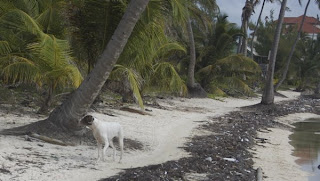 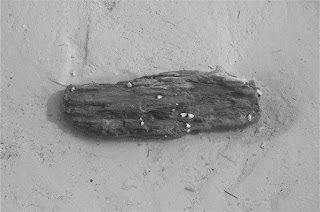 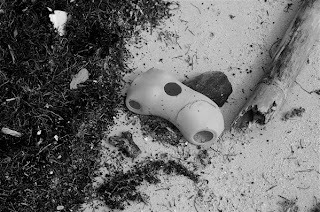 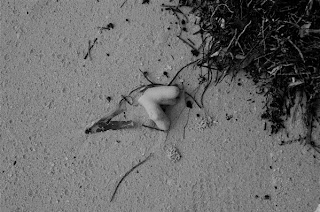 I am just astounded at the plastics washing in from the ocean: cosmetic containers, bottles, caps, etc.  If this is one little beach, how much is out there somewhere? 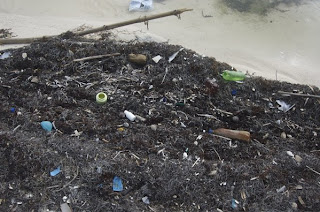 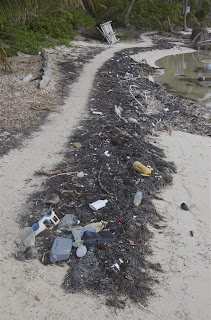 Some of the flowers on my trip back to San Pedro. 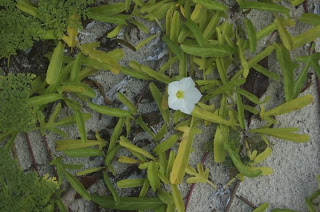 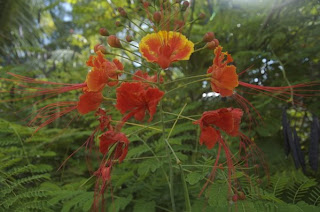 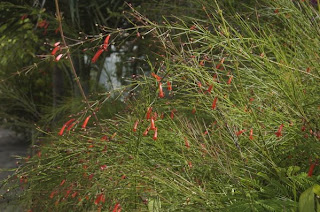 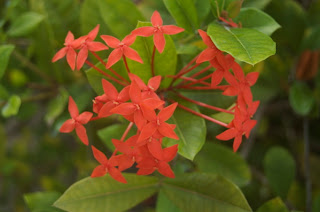 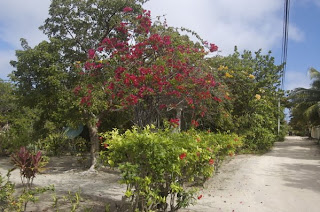 And the final contrast: San Pedro life if you are not an ex-pat, a tourist, or wealthy.  This is on the beach next to some condos.  It kind of reminds me of something a friend of mine in Kayamundi, South Africa said to me once.  They had the most awesome view of the valley from the hillside out of town where the black South Africans were forced to live under apartheid.  He said it was the only good thing that came from apartheid for his people.
This family would have had an awesome view of the ocean and cool breezes all the time, unlike the still and hot areas within the town. 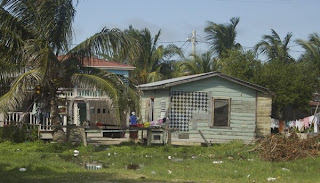 I have some more work to do today in the community.  I was out and about yesterday doing windshield surveys in San Pedrito, grounding my understanding of the community in community based work.  While the needs are many, the resources and strengths in that community are many as well.  I must get busy on this my last day of working here.
Last evening after I gave Cynthia a ride home, I discovered she lived in San Pedrito, so I told her about spending my afternoon there.  It was interesting to hear about her situation on the ride home.  Normally, she walks from there to her job, and it takes her an hour and she must be there by 7.  After being on her feet all day long, she walks the hour back home at 5.
Marlin and Butch came over and we cooked--Marlin showed me how to do the fish, and I made the capillini pomodoro and we enjoyed it very much, especially the camaraderie.  Kim finally made it back after we had eaten (but we saved her some) and then we sat on the patio for a while listening to it rain and enjoying the cool.
Tomorrow, I will go home and while this has been a good trip, I will be so happy to be home!
Posted by Suzassippi at 11:17 AM