Maybe I am not an Island Girl after all

It is a beautiful and cool and raining Sunday afternoon, and I am really enjoying it.  I am on our patio writing after getting my photos from yesterday and today uploaded.  I love the sound of the rain falling on the palm fronds, and it is sooooooo cooool that I am afraid to say it in case it suddenly turns in to a steam bath. :)  Kim and Biggs are just now walking up--I was starting to worry as they had gone out in the boat pre-rain and I did not know how long they would be there or if they made it back to shore.  Kim said it was cold out there, though, with the rain and the wind blowing on the ocean.
Yesterday after lunch, Kim and I went to rent a golf cart in order to do some site seeing on the north side of the island, which is too far to walk--not to mention too hot.  We drove across the toll bridge, past the school and made a stop at a new development.  The laborers are building the last of the condos there, and doing the back breaking work of hauling sand up in buckets to mix the concrete, shoveling sand along the areas where the condos are finished. 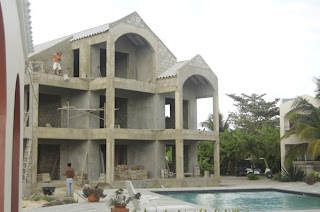 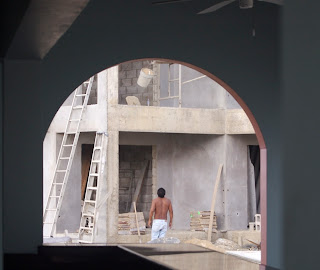 Kim's friend Butch, who was recruited by "Bob the Builder" to manage his bar at the new development.  It is only open a few days now, and the condos only have 4 regular tenants, so it was pretty quiet there.  We were supposed to meet Kim's friend Johnson there and go eat lunch. 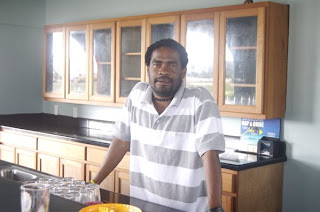 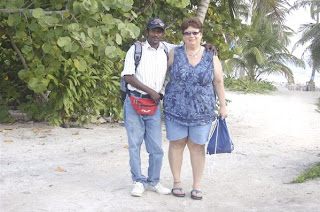 We ordered our salbutes, which were some type of masa fried, but not exactly a tortilla.  I had smoked fish, and chicken, and bean on mine (they are small).  The have some type of cabbage slaw and a tomato on top, and are just delicious.
While waiting, I took a few pictures, though it was getting late and the light was not that good. 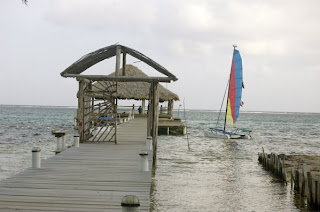 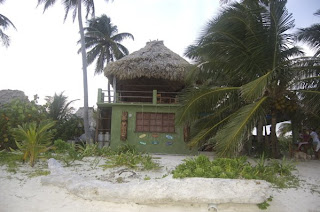 Some type of succulent that was quite unique looking. 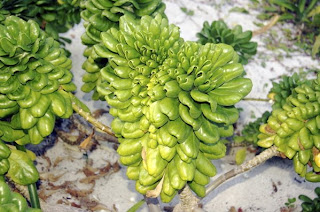 A piece of old tree that was worm-eaten, and quite weathered. 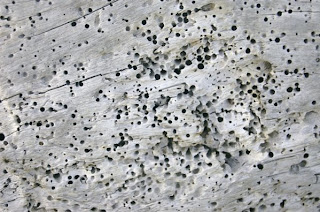 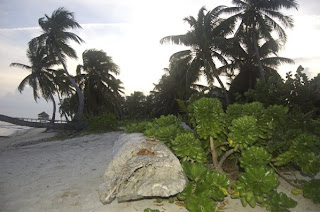 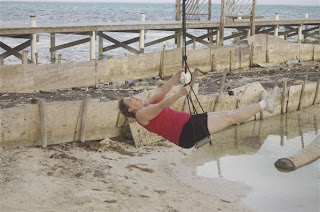 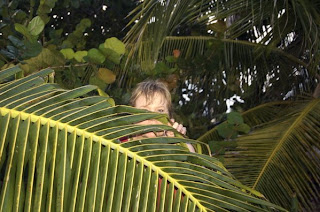 Totem and hut at Ak Bul.  It was very pretty here, right on the beach. 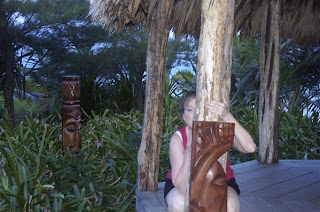 Some type of flower that looks like a day lily to me. 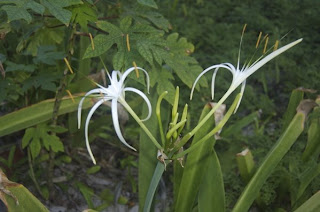 We waited for Marlin to get off at 5 and then headed to Palapa's--owned by some folks who do volunteer work at the school.  It is over the ocean, up on stilts, and open on all sides.  The wind was blowing and we saw the full moon (the biggest moon of 2009 supposedly) come up, and shine across the water.  It was really beautiful, even though I was getting quite tired by then.  I am not used to all this in my quiet little life in Mississippi.
We picked up ice for Butch and headed back to his bar to deliver his ice and wait for him to get off at 7 so we could give him and Marlin a ride home.  I had dropped Johnson back off at Butch's earlier as he had his bicycle there and was scheduled to make a fish delivery.  Johnson is a fisherman and as we drove back to Friar Tuck (where Butch works) from Ak Bul, Johnson told me a lot about his work and his life.  His family was from Indian and he is East Indian, though this is home to him, his wife, and his children.  Butch finally closed up and we gave him and Marlin a ride back to mid-town.  I met Marlin's daughter who politely extended her hand to shake hands with me.  She is very young--maybe 2 or 3?
Back to our apt and I took the cart up to my favorite place (where the dog Negro's owners live :) and ordered a to go.  I played with Negro and also saw some of the graduate students from Holy Cross eating there.  The kids who had been at our apt earlier were there as well.  I am really going to miss Negro and the deli people--they are so nice to me, and I love the food.
Early to bed for me as my ankle was swollen and I had way too much sun and heat for one not used to it.
This  morning, we got up and dressed for church, intending to get breakfast before.  The golf cart would not start and we called them.  They came and tinkered with it (it sounded as if getting no gas, and we had little power) and got it running enough that we made it to church on time, but no breakfast.  After another incredible service, we went out and the cart would not start.  Finally, I got it to start and we went to Estel's for lunch, but glory hallelujah, they were still serving breaking at 1 pm!  Huevos rancheros, beans, and fry jack, and I splurged for a Coca Cola!
(Oh, it is pouring rain, now and I LOVE it!  So cool, so pretty.)
We sat out on the beach and watched people while we ate. 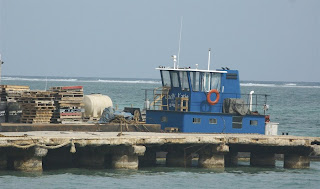 A woman looking for shells in the water.  She would pick up one, examine it, and discard or keep.  She was looking for really small ones. 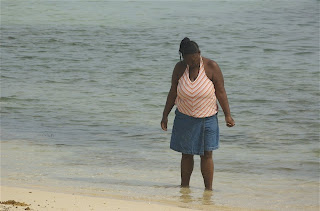 My little breakfast companion sleeping under our table. :) 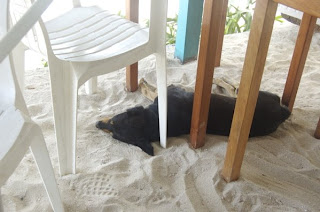 Running up the beach. 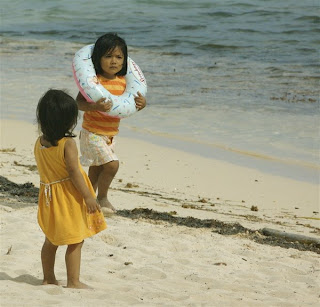 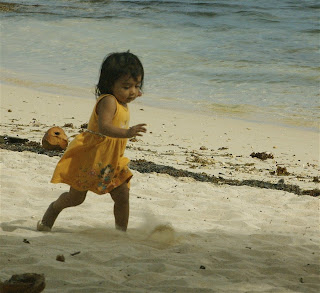 Swans  on the building outside of Estel's. 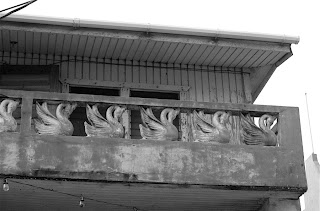 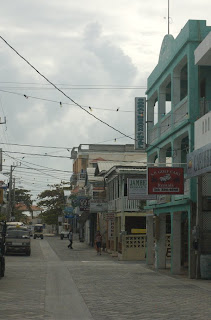 Posted by Suzassippi at 3:44 PM

I am enjoying all of your adventures! You are a busy woman with full days, that is for sure! Love the stories, photos of the local people and interesting scenery. We are winding down and heading back to San Fran in the AM. Will be able to write more once we are home and back to our more quiet life in AK. :)

Thanks for reading. I think you and Rich and Randy and I would have a lot of fun here, though I am not sure about if we could eat our way through grand chef restaurants.

Have a great rest of vacation!

Awesome times. It is great to know you guys are doing so much. That is what I love so much about this place. It allows you to be a part of the every day life. The sound of the rain helps bring us there.