They call it stormy Monday, but Tuesday's just the same

If I look up when I am on the chaise by the pool, this is my view, multiplied. :)  I love the sound of the fronds in the breeze.  If it rains, the fronds actually keep the rain from falling on you. 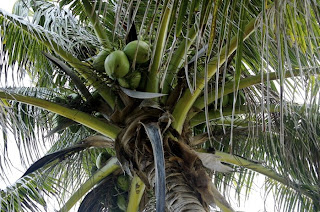 One variety of the many beautiful flowers in our courtyard. 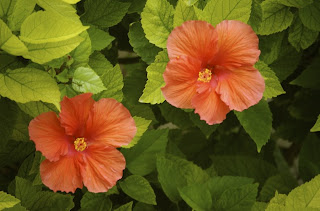 Parasailing on the ocean by our villa. 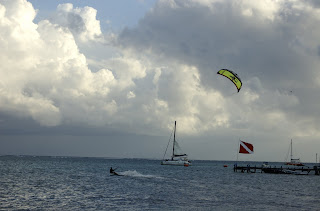 Last night, Ernesto picked us up and we headed to mid-town for supper at a local Spanish deli.  It was awesome--stewed chicken with beans and tortillas, simple, but delicious.  It is a family owned business, and they had a young German Shepherd outside the door.  I asked the owner about him and told him about our Rex.  I asked if I could pet him, and he gave me permission.  The dog is about 10 months old.  They speak Spanish to him (his name is Negro--pronounced nay-grow in Spanish, which means black.  The dog has a predominant black saddle, and is fairly light around the face and legs.)  I spoke a few Spanish words of endearment to the dog, but the owner said he is a bilingual dog and understands English as well.
After dinner, we went to a place called Crazy Canuck's to hear a local reggae band, the Punto Boys.  I have never heard live reggae and it was quite fun and interesting.  It is right on the beach, and an open pavilion style so it was cool and breezy.  I think Beyonce trained here, as the women dance very much like she does.  I simply used my old Tejano roots and it worked just fine--Latin is Latin apparently and the beat and sound is very similar to my favorite Cuban, Latin, and Tejano musica.
Kim and I were not required to be at work as early this morning, since it was not the first day of the term.  I still got up at 6:30.  We met several people Kim knew on the walk to work, however.  I did observation of the children in my assigned classroom, spoke with the teacher about one boy, and made notes for Kim to do follow up.   I really liked the very positive way the teacher interacted with the children, and told her so.  She looks to be quite young, but seems to have a passion for teaching and for the children.  I also met with the special ed consultant regarding a child, and then it was time for lunch.  After a lovely lunch at school (yes, the staple of beans and rice, and chicken) I went back to my classroom to work with my boys on their reading.
The classrooms are simple wood frame rooms, with ceilings of blue roofing tarp like we use in the states following the hurricanes.  The tarp is stapled to the roof frame, but there is insulation between the roof and the tarp.  There are two fans in the class room and with the jalousie style windows opened, it is actually pleasantly cool.  There is a roof over all the classrooms and passage ways, so the sun does not reach the rooms and it helps to keep it cooler.  The desks are donated--recently a group of desks came from a school in Texas actually.  However, they are not necessarily the right size for the child, and some of the desks are too large for the child, which makes it not ergonomically correct for them to write, hold their books, etc.  You can see the systemic effect as children often have to stand as the desk is too tall to be comfortable when their arms are not at a 90 degree angle, but rather elevated up to the chin level.  This is in no way meant to be critical--this school is doing incredible things with very little, and the children are just wonderful.  They smile so much, seem so happy.  I was impressed with the classroom today and how the children interacted, but still, you can see how learning is affected by the environment.
We were both quite tired after class today and had walked as far as the toll bridge when Joe (the young man from Chicago whose foundation is looking at support for the school) was being driven back to his hotel by the school van driver and they gave us a lift to our villa.
I went to the store and got items we needed since we had moved apartments.  I cooked dinner (now that was a trick due to my lack of experience with the food here) but made spinach lasagna and sauteed eggplant with tomatoes and garlic.  You can only buy meat at the meat market, so that is on the agenda for tomorrow.  Ernesto came by and ate with us--I do not know if he actually liked the food or not, but he was gracious and cleaned his plate and rated it a 5 of 5. :)
I am headed to the pool for the cold water to help with the swelling in my ankle, then off to bed early tonight.  Let's hope our watchdog on the roof behind us is a little quieter tonight!
Posted by Suzassippi at 6:53 PM

The sounds of the fronds are a thing to miss for sure.