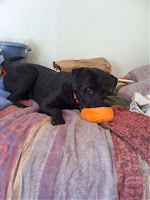 I was reading in the NY Times this morning about the French Huguenot settlement in Florida, which occurred some years before the Pilgrims landed the Mayflower.  It is always interesting to me how we re-invent our historical myths by conveniently ignoring what we do not want if it contradicts the story we do want.  I actually thought that the Huguenots came later, and had heard they migrated from Canada after escaping France and religious persecution, ending up in Virginia--at least some of them.  One of my ancestors was disinherited for marrying one, referred to in the historical family documents as "a dark-skinned people."  I assume that in Virginia, that might have been a little too close to "black" for the patriarch, but that is a mere assumption since I have no way to verify that.  Said son, however, was not forgiven until his father's deathbed, at which time, all the sons proceeded to lose the carefully amassed coal mines and land accumulated by their father, who had come to the colonies as an indentured servant.
The article was pointing out not only that we have ignored this earliest settlement on our shores (because it does not conform to the myth we wanted that labels us "English"?), but the many bloody battles that have been fought on this soil over religion.  The author (an historian) noted that it is predominantly myth rather than truth that the US was welcoming to those seeking religious tolerance and freedom, and that in fact, we have primarily been the opposite.  It made me recall the ship of Lithuanian Jews who were refused entry to New York (among other places) and finally returned to Lithuania and their death in the ovens.
I wonder at what point the colonists who were grateful for that first successful harvest, supplemented by wild game from the Native Americans, made the decision that the continent was not big enough for both of them.  Can you imagine "Thanks for coming and bringing dinner.  Now we will kill you and take your land."  What transpired between those two extremes?  Was it the "religion" question?  Was it a battle of culture, where in our ethnocentricity, we see all else as inferior to the culture to which we belong, whoever the "we" is?
One of my friends says what I write is "far too serious" (which was the nicest thing he said about my blog LOL).  He is probably right, but I just find the many contradictions between our myths and our realities sort of fascinating--bizarre, even, one might say, and cannot resist the urge to explore it.  There is also lots of room for the mundane (yesterday's chimenea/cat blog) and the humorous (the now defunct Lottabusha County Chronicles), but surely also for the occasional musing of the myths?
And, the latest thing I have found in the blog "A Sense of Place"--someone who writes he is seeking the respect of his dog. :)  Gotta love anyone who loves dogs and their place in our lives.  There is someone who takes life seriously without being "far too serious."  Or at least, that's my myth about it. :)
Posted by Suzassippi at 10:00 AM

I had no memory of that Huguenot settlement, either. You know that it is said that mainstream history is told from the view of the victors; our myths certainly come from that place and get perpetuated over time as people learn to believe what is passed down as fact. I loved Howard Zinn's book A People's History of the US for telling some of those stories from another vantage point. Living in Alaska definitely brings home to me that "explorers" often become "oppressors" and the repercussions can be devastating and long standing.

I like serious discussion along with my dog stories and remodeling tales. LOL

You should read the book "Lies My History Teacher Told Me". Really eye opening!