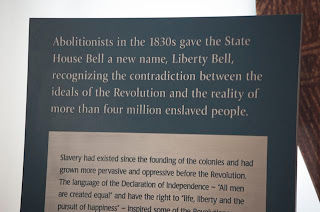 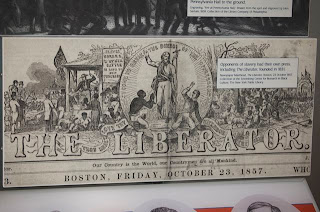 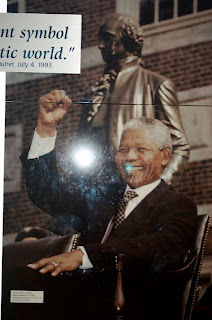 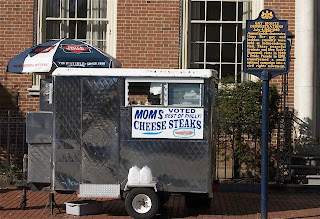 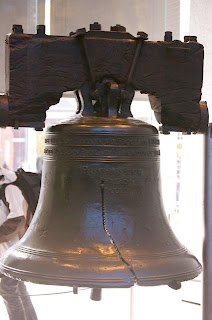 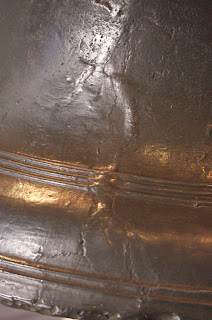 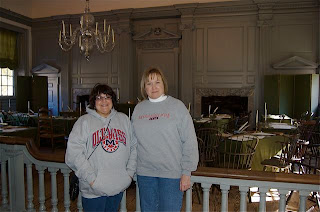 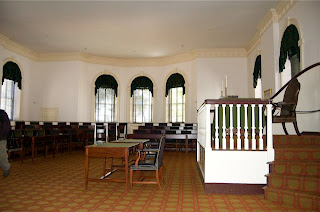 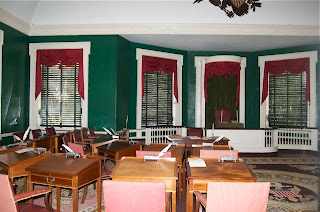 Wednesday night we are in our room and suddenly we hear horns honking and people screaming and yelling.  Yes, the Phillies won the World Series:  let's get this party started.  It went on...and on...and on...we could still hear them way after midnight and had to crank up the air conditioning fan to help drown out the celebration. :)
The conference did not start until Thursday evening, so Jill and I got up early Thursday morning to take a tour of the city's most significant landmarks.  Our concierge placed our reservation for the shuttle pick up and we were taken to Constitution Center to get our tickets for Independence Hall.  We went through Liberty Hall on the way.  It was an incredible experience to see the birth of this nation again, through the eyes of the women and men who risked their lives to do so.  An especially poignant moment was the story of how the State Bell came to be renamed the Liberty Bell.  When the abolitionists realized that the bell of freedom excluded a race of people who had been enslaved, they sought to have the name changed to Liberty Bell and fought for inclusion of slaves under the umbrella of freedom as defined in the Constitution.
I was enthralled by the photo of Mandela sitting in our Independence Square, realizing how the United States has been such an historical model of democracy, and longing for the day when we are again seen as lifting our lamp beside the golden door, a welcoming from the Lady in the Harbor of all those who yearn for freedom, an opportunity for a better life, and are willing to sacrifice--just as our foremothers and forefathers did--to obtain that.  I pray that South Africa and the US will both find our way back to the ideals of democracy that birthed our nations and bind us together in our shared histories.
Of course, because I was carrying my backpack with my camera in it, I and my backpack had to be searched at both the Liberty Bell and Independence Hall.  It is a small price to pay for the privilege to see those symbols of our past, yet a sad reminder of the world in which we live in these times.  I was honored to stand next to people from many other countries who wanted to have their pictures made next to the Liberty Bell, and to talk with some of them.  As always, I enjoyed engaging with people, such as the guard at the entrance who chatted with us, the guide who was dressed in period clothing and was escorting a group of school children in our group, along with the various park ranger staff who escorted us during our tour.
It was incredible to stand in chambers where people we know only historically, Washington, Jefferson, Franklin, and others, stood, walked, sat, talked, negotiated, and laid their lives on the line for an ideal in which they believed enough to be willing to die to see come to reality.  We sat in the original House of Representatives chamber and stood in the gallery of the original Senate chambers.  I could close my eyes and sense the passion present in those rooms, still present in spite of time.  Perhaps I idealize it, but somehow, what transpired in the years planning, executing, and following the revolution and the birth of a new nation and government seemed somehow far nobler than what we often experience today.  Perhaps because, like South Africa after the rush of democracy high, reality sets in and greed takes hold and the very  power of power at times causes people to forget the very reasons they fought for that freedom.
After our dismissal from Congress, Jill and I enjoyed an authentic Philly cheese steak while waiting on our tour bus.  Our guide would ask as each of us boarded "Where are you visiting from?"  One woman said "Abilene, Texas."  I said to her "That's my home town!"  She sat in front of me and we introduced ourselves.  She teaches social work at Abilene Christian University, and knows my good friends Odis and Sherri and Jean, so that was fun.  We talked a bit about the community in Abilene (Carver) in which I and my students used to work with Odis.
We rode the tour--not getting off anywhere as we wanted first to see all the landmarks--and then after returning to our original departure location, walked two blocks to the Betsy Ross house and went through, caught the bus up to the Reading Terminal Market and had a field day shopping in the market.
We had lovely coconut macaroons from the Flying Monkey, tasted wine at the Blue Mountain vineyard which is a Pennsylvania wine--and wonderful, believe it or not!  I bought a bottle as it is my favorite dry red, with the sweaty saddle nose.  We enjoyed all the Amish booths, fresh vegetables and fruits, cheeses, breads, etc.  We bought cheese and bread and fruit and decided to have a simple meal in our room that night.  The market was across the street from the conference hotel (we were staying a few blocks away) so we stopped over to pick up our registration packets and then walked back to our hotel.
A light meal of bread, cheese, fruit, and Warwick Three Cape Ladies (an incredible South African wine that rarely gets imported here, but I found it in a wine shop in Philly) and we were ready to hit the sack and prepare for an early rising and the conference on Friday.
As the Swarz says, "I'll be back."
Posted by Suzassippi at 9:22 PM

Yay Phillies! I still love all the historical sights and appreciate their meaning more and more, I think. I wish for the day when our ideals are fully realized.

Funny to run into someone from ACU. :)

As always I enjoy your discription of all the sights. The pictures were great and I enjoyed them too.

Thanks! I am having a cup of my chinese tea this morning and remembering what a great time it was. Being inside the Betsy Ross house would make you happy we aren't living there!