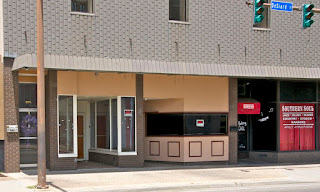 I don't know about the objectivity of that statement, but the limited section that I observed was certainly interesting.  According to the assessment to nominate the nearby residential district for the National Register of Historic Places, there was no published history of the city of Monroe, making assessment difficult.  Apparently, however, the history of the community was largely associated with the opening of the oil and gas fields in 1916. 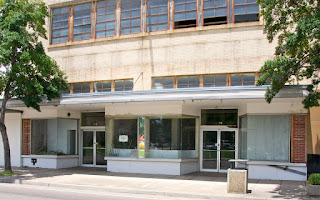 This entire block is owned by the same family, and includes a candy store, a clothing store, and the Southern Soul club.  The buildings have also housed other clubs throughout the years, including the Club Eschelon. 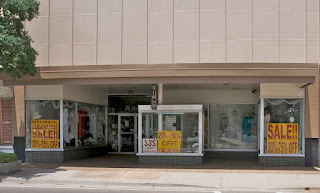 During the 1930s, the 200 block of DeSiard was home to the Morgan & Lindsey 5-10-25 and Woolworth's 5-10-25, both side by side, and bearing store fronts similar to these.  I puzzled over photographs taken by Griffin Studios in the 1920s and 1930s.  At one point, Morgan and Lindsey were to the right of Woolworth's, and later, to the left, if you were standing facing the block as I was here.  At some point between the two photographs (Griffin took a series of photographs of DeSiard Street during the two decades; you can see them here), Morgan & Lindsey relocated.  Check out the link to see the fashion models from the Palace Department Store, 1924!
Posted by Suzassippi at 12:16 PM

This is interesting; there was a Morgan & Lindsey store in Oxford, too. It was on the square and was a child's paradise!

Whoa...you said you were from Mississippi, but are you from Oxford? Tell me more about the store here!

Daddy was from Oxford (grad. from Ole Miss, too). My grandparents lived on University Ave. Mama & Daddy are both buried in Oxford...I love Oxford, part of me is there, on the Square and in the Grove! (I live in San Antonio TX).