The Whitney Theatres in Albany: The Ritz and The Aztec 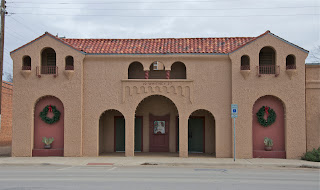 Frank Whitney built the Aztec Theatre in 1927 as a counterpart to his Ritz Theatre up the street.  According to the Albany News, June 24, 1927, it was "to be a stucco building of Spanish design...will feature western pictures and the Ritz will show only the very latest and best pictures on the market."  The Aztec was originally built as a "working class" theatre.  It became a community center after extensive renovation in 1939 by Mr. Leon, who owned a chain of theaters (The Leon) across the region in Texas.  Leon bought the Aztec after Whitney's death.  He changed the interior to the West Texas vernacular version of a Spanish courtyard, complete with clouds and twinkling stars overhead. 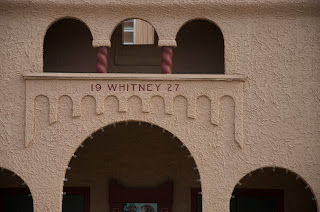 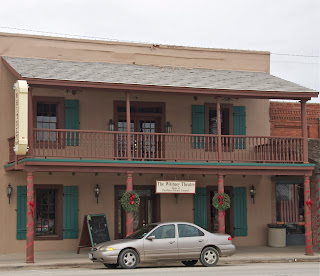 The "city cousin" to the Aztec was the Ritz, now known as the Whitney.  It currently sees use for dance and musical productions, as well as serves as a popular wedding venue for area brides. 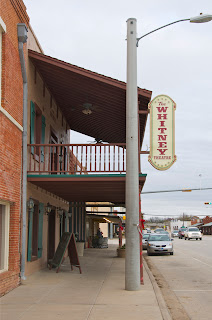 Albany does have a terrific downtown and they apparently have worked hard to keep it vital.  It was thriving in 2003 when I left Texas, and shows all the signs of continuing to do so, unlike many of the downtowns in nearby towns that took a nosedive with the economic downturns of the last several years. I suspect one of the reasons is the diverse character of Albany downtown.  Rather than sink all their efforts into one focus (such as Baird downtown and its antique stores--most of which have closed), Albany has maintained much of the character of an actual downtown that meets the needs of its citizens as well as brings in tourists.
Posted by Suzassippi at 8:06 AM