El Dorado is not all one would think it might be, but Ozmer House makes up for it

I pulled into a gas station/convenience store in El Dorado, needing a convenience stop and something to drink.  No rest rooms.  Okey doke, and back to the car and on down the street.  I passed the Pine Tree Inn, and was reminded of a time many years ago in my former lifetime when I got stranded in a small Arkansas town due to fog.  I spent the night in the Pine Tree Motel--the only place in town.  I am pretty sure it was no way related to the Pine Tree Inn in El Dorado, other than this place appeared to be old enough to have been in existence in 1971, and might not have been painted or repaired since 1971.

I stopped at the next gas station/convenience store.  The woman sweeping the floor informed me rather testily that "no ma'am" they do not have a rest room.  What is the deal in El Dorado, folks?  While I am in no way comparing my situation with black people's experience under Jim Crow, the phrase "Don't buy gas where you can't use the rest room" popped into my head.  (I had just read an article about Dr. T. R. M. Howard of Mound Bayou and his bumper stickers that said that--sparking a boycott of service stations that refused service to blacks, but would certainly take their money.)  I had been drinking that huge iced tea picked up in Hamburg, so I really needed a pit stop.  I spied a McDonald's and pulled in, since it was getting time to eat anyway.  The order counter was about the smallest Mickey D's I have ever seen, and there was literally no place to stand and there were only 3 of us in there.  I finally gave up ordering and just found my way back to the highway and out of the less than hospitable El Dorado, Arkansas. 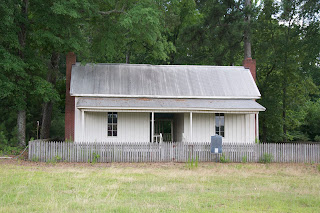 Just out of Magnolia, I saw this little dogtrot standing in a field.  For the second time that day, I turned around and went back to take a photo.  Unfortunately, it was fenced off and there was no way to get closer, but even before I saw the historic marker, I recognized this was probably a significant building.  It is the Ozmer House, built in 1883.  Arkansas Historic Preservation Program identified its importance:


...architecturally significant for its excellent craftsmanship...box-construction with board-and-batten exterior and interior...gambrel ceiling and handmade pine mantels...

The dog trot house has a kitchen ell on the rear, and was representative of the farm homes built during that time period.  This area of Arkansas was developing into an agricultural and economic boom area, and the railroad further increased that prosperity. 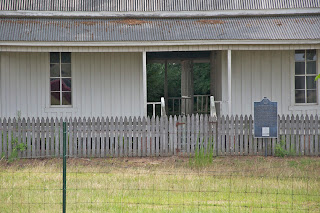 The Ozmers were a family of yeoman farmers, originally from Georgia.  The house was located in an area with other family farms, and the Ozmers helped to establish a Presbyterian Church and the Greers Chapel Church.  Mr. Ozmer lived in this house until he died in 1941.

The house was donated to the Southern Arkansas University on the condition of relocation.  The area where the house originally stood (one-half mile from here) was experiencing increased commercial and residential encroachment, and there were concerns the house would be demolished, or fall into disrepair.  It was placed on the National Register of Historic Places in 1986.  Sunflowers and zinnias were planted next to the house several years ago in an effort to increase its visibility from the highway, but nothing was blooming on this summer day.  I'm not sure why they want it to be more visible, since there is no place to park on the highway, nor be able to see closer to the building due to the fence.  However, it is at least safe and sound for now, and I love a preservation story with a happy ending.
Posted by Suzassippi at 10:43 AM