As I continued west on highway 82 toward Texarkana, I passed through yet another small town.  I glanced to the right--toward "downtown" and saw a row of old buildings and I knew I had to make another stop.  Taking the first right turn off the highway and going around the block, I pulled over to park.  Lewisville, in Lafayette County, Arkansas was the subject of an earlier post on the courthouse. 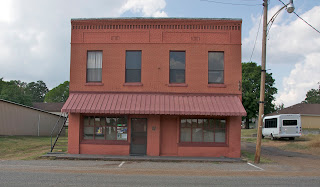 The Triplett Company Building, c. 1915, was built as the office for a lumber company.  The Arkansas Historic Preservation Program identified the significance of the building:


...one of few surviving commercial buildings in Lafayette County constructed during boom of the timber industry brought on by the arrival of the railroad earlier...

...best surviving example of a panel-brick commercial building in Lewisville...

It required some extensive commitment to locate information on panel brick style.  The High Street Hill Association, Boston, has this to say about panel brick:


...brick masonry was used to create a decorative pattern of projecting or receding panels.

Trademarks of the style are stepped corbel tables, string courses with geometric indentations, and various cross-shaped panels which animate the facade with their crisp patterns. The Panel Brick ornamentation is often centered at points of architectural interest such as cornices, pilasters, windows, and doors. The wall surface itself is also divided into panels of ornamental detail which vie for the eye's attention. Historically, the Panel Brick style holds a critical position in architectural development. First, it indicated a decided break from the restraining canons of classical architecture prevalent through the Civil War. Second, the experimental way in which brick designs were substituted for classical details was a prelude to the individualistic forms and varied materials of the Queen Anne style. Third, the Panel Brick style may be viewed as an early attempt to design a building which reflects the nature of the building materials, an attitude which looked forward to the work of H.H. Richardson in the 1880s.

The building is on the National Register of Historic Places due to the association with the railroad and timber industry in Arkansas during the early 1900s.