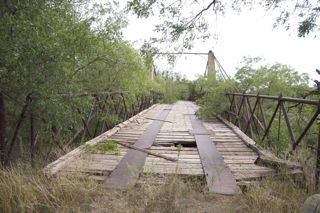 Last year while researching another bridge over the Clear Fork of the Brazos River, I read about a suspension bridge near Woodson.  I spent a lot of time in Woodson, as my grandmother and other family lived near or in Woodson.  I was successful on my efforts to find it this trip.  The Woodson bridge is one of 7 remaining suspension bridges in Texas, and was built in 1896 by the Flinn Moyer Company of Weatherford, Texas. 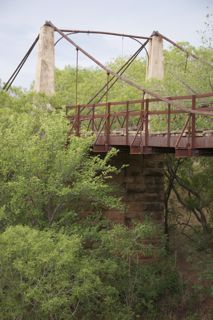 The towers rest on stone piers and the cables are made of galvanized steel wire strands wrapped in strands. 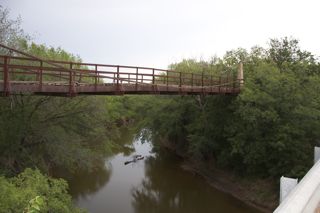 I have details (and detail pictures) of the bridge from historican Dr. Mark M. Brown, and will post the rest of the story later this week.  In 1995, the Texas Senate passed a resolution directed to the TX Department of Transportation to restore and maintain the bridge; the 1996 study was apparently the end of the effort to preserve the bridge and it now sits deteriorating.

Dad told me a story about the building of the suspension bridge over the Brazos at Newcastle when he was a boy.  They held a "bridge dance" to celebrate the opening of the bridge and the bridge began swaying due to the movement of all the people on the bridge.  He said he was not on the bridge, just a young boy watching as they lived near the river.  Everyone was ordered off the bridge, and that was the end of the bridge dance.
Posted by Suzassippi at 5:59 PM