Yes, we're still in Lewisville, and going to be here for a while--lots of history here in this little town! 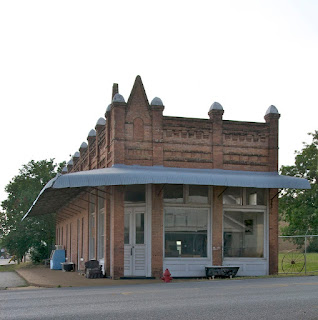 The King-Whatley Building, circa 1902, was built to serve as the Merchants and Farmers Bank.  Arkansas Historic Preservation Program identified its significance:


...style and size reflect the optimism and prosperity (short-lived) that cotton-growing and the railroad brought to this Southwest Arkansas region.

It was also significant in that in 50 years, it housed 2 banks, law offices, a land abstract company.  The building is unaltered.  The Merchants and Farmers was short-lived, dissolving in 1908, and the First National Bank of Lewisville moved into the building the following year.  It has housed a shoe repair shop, a rental library, and a beauty shop in rear offices.  The land abstract office closed in the 1950s and the building has been vacant since that time.  It was listed on the National Register of Historic Places in 1978.  Whatley's daughter, Snow, died in 2011 at the age of 96.  The King heirs intend to keep the building intact and reactivate it as a community-use facility.  In 2001, it was listed as one of Arkansas' most endangered buildings. 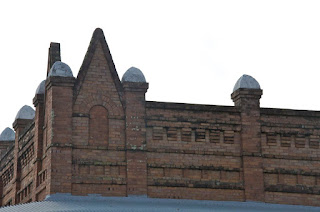 Posted by Suzassippi at 9:20 AM