Today, I was in Research "hog heaven"--sitting at an antique library desk in the Archives and Special Collections, searching the souvenir booklet from the 50th anniversary of the founding of Mound Bayou.  One of my favorite pastimes from years ago--pre electronic age--was being in the stacks and thumbing through references, taking notes in my meticulous printing, spending an afternoon in some corner of the library.  While I was unable to obtain what I was there for (apparently the copy machine in archives is as old as some of the items in the collection, and today was on the blink), I had fascinating discoveries that kept me there for 2 hours.  I reluctantly departed then, and only because I had class to teach.

Last summer, doing my first research on Mound Bayou, I discovered photographs taken in 1939 under the WPA program, and thus in the public domain.  I searched to locate information about the buildings in the photographs, but could not turn up anything.  I was elated today to see the answers to my questions in the 1937 souvenir booklet.  Not these photos (since they were taken 2 years after the 1937 celebration), but other photographs and descriptive information in the history of Mound Bayou yielded the information to those heretofore unanswered questions. 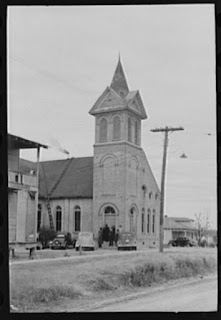 The First Baptist Church, one of the first brick churches in the county, was constructed in 1905. 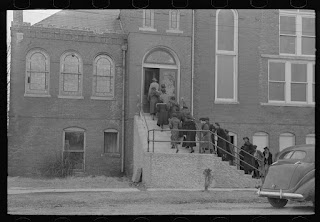 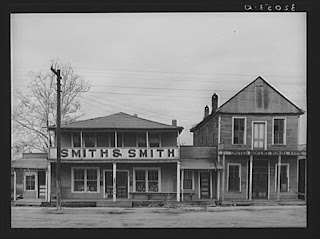 Smith and Smith was a grocery store, and C. L. Keys was identified as the proprietess.  The ad in the celebration program read:

We Carry a First Class Line of

"Nothing Cheap but the Price, Nothing High but the Quality"

Stop at the Best Hotel for Colored in the Delta 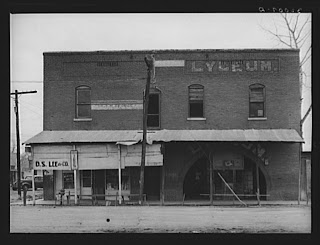 D. S. Lee & Co. was located on the corner of Green Street.  Kansas City meats were seemingly particularly valued in the Delta (or perhaps just available due to the rail lines from Kansas City).  D. S. Lee & Co. advertised: 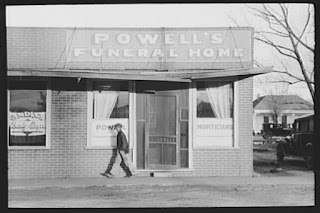 W. T. Brown, the first licensed resident embalmer in Mound Bayou and now a successful undertaker in Chicago, Illinois, will soon erect a modern establishment here to be operated by Joseph Crossley, a local youngster and graduate of Bolivar Training School now in Chicago preparing to take an examination of the Illinois State Board of Embalming.  Mr. C. M. Powell has under construction a building that will be the new home of the local branch of the Powell and Powell Undertaking Company of Chicago, Illinois, and Mound Bayou, Mississippi.

This building was photographed (as were the others) in 1939, so I presume it to possibly be the building under construction during the 1937 celebration.  The Powell funeral home was also mentioned in the 1962 celebration of the 75th anniversary of the founding of Mound Bayou, though it was most likely not this building.  Most of the downtown burned in 1941 and this building may not have survived the fire.

The city of Mound Bayou celebrates its 125th anniversary of the founding this July 8-14, 2012.