Last Thursday as I left for Texas, I decided at Grenada to veer off the Interstate and go through the Delta.  I decided the couple of extra hours of driving time would be worth it to see a part of the country new to me, and that stopping for a rest break in a picturesque little town was far more appealing than stopping at some McDonald's or Shell service station on the Interstate.  Besides, it is looking like that trip to Texas might be the closest thing I get to a vacation this summer, and I thought I might as well pretend I was on vacation.  I was right.  Crossing the bridge in Greenville, I moved into the Arkansas Delta. 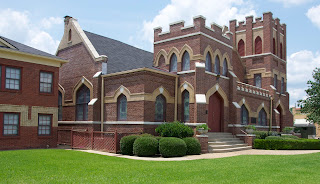 The Hamburg United Methodist Church, constructed 1910, occupies the same spot as the original church, a wooden Gothic Revival building, constructed sometime between 1850 and 1865.  The present Gothic Revival, with Moorish variant, is on the National Register of Historic Places.  The Moorish variant was unusual at the early date of this church's construction, not becoming popular until after the 1920s in the nation, and was quite uncommon in Arkansas (Arkansas Historic Preservation Program). 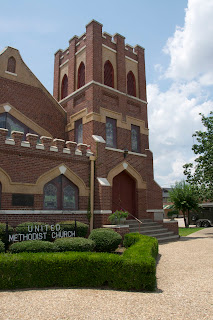 The bell was struck in England and shipped to New Orleans, and from there, up to Marie Saline Landing--which would have taken it on quite a circuitous route through various rivers, lakes and bayous, from looking at the map.  The bell arrived on the date of Lincoln's assassination (1865) according to the United Methodist Church Southeast District Office history.  There is no identified date of the first church building, but the church was organized between 1848 and 1850 and they received their first pastor in 1850.  After that, they built the first wooden church building, no specified date. 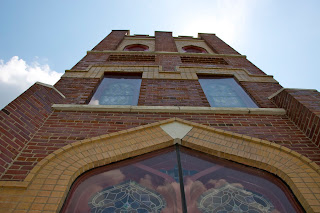 The building was designed by J. A. and Sebe Nolley, local brick makers.  The Nolley brothers were asked to design a Gothic Revival church due to their known craftsmanship and skill.  One of the brothers (the Arkansas Historic Preservation Program does not distinguish which one) traveled to the St. Louis World's Fair to view examples of Gothic Revival architecture, stating he was not familiar enough with the style to design it. 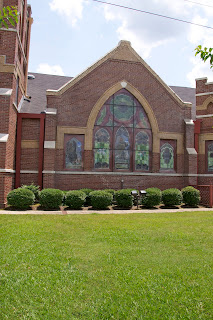 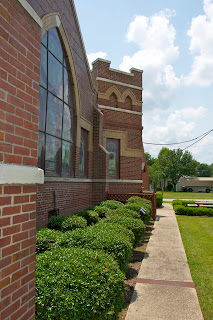 There is a shorter tower at the rear of the building, not as ornate as the one at the front. 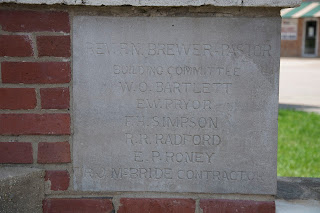 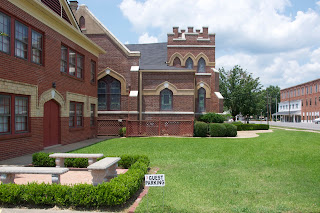 The building was added to (the sanctuary is on the NRHP list, added in 1992) several times during the mid-century.  In the 1990s, the church undertook extensive remodeling and renovation.  The original wood trim was restained to match the new wood additions to the altar and other parts of the sanctuary, but the original tin ceiling was repaired and repainted.  The fellowship hall to the left in this photograph, was designed to complement the original building, and did not appear to unduly detract from the historic structure.

All in all, it was a pleasant first stop on the Arkansas side of the Mississippi River.  I will add to the Hamburg visit later this week.  A quick stop at the Sonic for an iced tea (and a hit-up to donate to send the seniors to somewhere--Washington, D C?), and then I was back on the tiny little two-lane and driving west.
Posted by Suzassippi at 11:59 AM

Always interesting to read about a historic church or other building. You took some nice pictures too.

Thank you. It was a beautiful building and I enjoyed the town.

Thank you for visiting my hometown of Hamburg, Arkansas. Your photos are really good and thank you for sharing this history, it was very interesting. I had no idea the church was so old, not knowing about its origins in the mid 1800's. Y'all come back now, ye hear! ⛪️

I am glad you enjoyed them! I have traveled through a couple of times now, and was able to photograph your historic New Deal post office on the most recent trip.