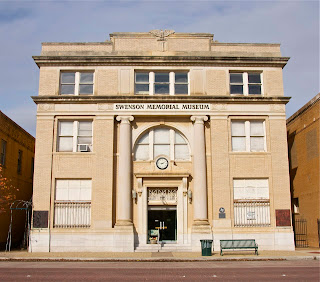 The First National Bank of Breckenridge was organized in 1904; they moved into this building on its completion in 1920.  Per the Texas Historic Marker, this is a Beaux Arts Classical Revival structure.  Barely visible to the left in the photo is the metal framing for what once was a covered stairway to the upper floor. 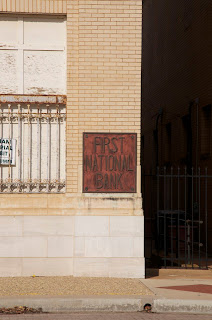 I presume these iron bars are from the time the building was a bank.  First National remained in the building until 1972.  The history of the museum is pretty fascinating, based on a lawsuit filed by the two Swenson sisters in the 70s.  The Swenson family was fairly prosperous in terms of land and mineral holdings and had been in the Breckenridge area for 90 years.  The sisters, Clara J. and Alma B. Swenson, were both school teachers and never married.  Their brother, S. T., managed the inheritance.  The short version of the story is S. T. persuaded the sisters to contribute a good deal of the money from the estate to establishing a museum related to the pioneer days of the area.  However, after several donations in excess of $50,000 a pop, the sisters decided they did not understand that they were actually signing checks to give money to the museum, nor understand they were deeding away their ranch land and mineral rights, and asked for it back, stating it wiped out all of their assets.

The results are a little murky to me, but there was no evidence presented that the sisters had been unduly pressured or misled, or that they were mentally incompetent to execute such gifts.  I found one of the most interesting things about the episode to be the reference to the sisters as "the girls" in the legal documents filed.  "The girls" at the time of the suit were in their 80s. 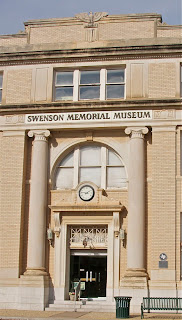 I love the "bracketed architecture" over the doorway and the embedded clock!
Posted by Suzassippi at 5:58 PM