WARNING: I am going to be talking about septic tanks, human waste, and sewage.  While it is not graphic, it is a topic some folks don't want to acknowledge: people have snot in their noses, and have to expel bodily wastes of urine and feces.  It all has to go somewhere. 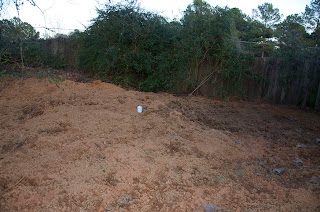 I know--doesn't look like much, does it?  Just last week this was a lush green lawn, albeit one with a dog trail running through it where Rex the GSD runs the perimeter about 12 times a day.  My new best friends, Freeman Jetting Service, just finished installing our new water treatment system.  For the uninitiated, in a rural area, that is way above the level of a septic tank.  A water treatment system is similar to a septic tank system only it works like a city's water treatment system.  It has 3 tanks, not 1, and an aerator to pump oxygen into the tanks.  Basically, that means the water that flows out the lateral lines is cleaner.  I'm hoping the key word here is "flows." 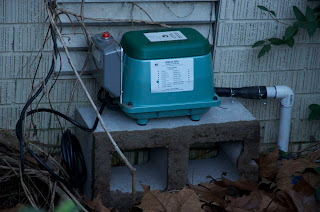 Now, I know I am no expert on this sort of thing, even though I grew up in the "country" and know plenty about outhouses, cesspools, leach fields, and septic tanks.  (I am talking the literal country, not the semi-country of today where folks live a few miles from town or city and have the inconvenience of a septic system but act like they are on city sewage.)  Long before you had the business of people who came out with a big truck and vacuumed out the septic tank, the only way to clean it out was...yep, open it up and clean it out.  I recall my dad doing that once---I imagine at that moment he was wondering why he married and had 3 kids, and why someone decided that cleaning out a cesspool was men's work.
Rand had to install a "gate" in the section of fence near where they needed to bring the equipment, and they told him it was a superb job.  True, he hinged it, added two locks at top and bottom, and was probably thinking the whole time "who decided this is men's work."  Given that I was in Mound Bayou with my class, picking up glass, trash, and ceiling tile...along with sleeping on an air mattress and channeling summer camp with communal showers and bathrooms...he does not have my sympathies.
Posted by Suzassippi at 10:11 PM