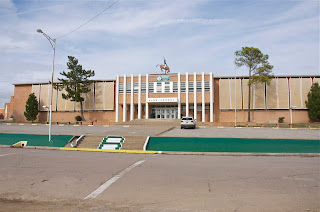 This modern building was built sometime after 1959. 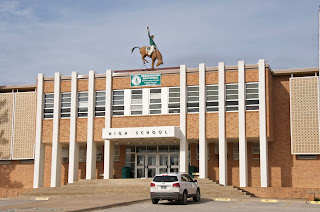 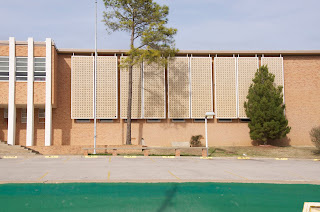 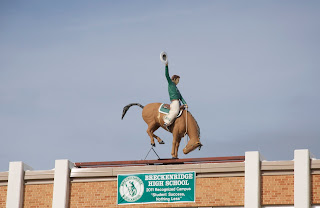 The sports team is the Buckaroos.  A buckaroo was one of three distinctive mounted herders in North America.  I know one would not necessarily expect this statue to be historically accurate, but frankly, it isn't even close.  One of Lawrence Clayton's last books (Vaqueros, Cowboys, and Buckaroos, 2001, with Hoy and Underwood) describes the differences "in terms of working methods, gear, dress, customs and speech."  The Buckaroos are found west of the Rockies, toward the north.  They trace their origins to the vaqueros, with some influence from the cowboys.  Based on their descriptions, here's how you know this is not a buckaroo:


Gear: the saddle had a 4 inch horn, wrapped in hide, in order to dally the rope around it; it only had one cinch, in the front, not two; saddle had a high fork and cantle, not flat; saddle was decorated ornately with "hoss jewelry" and sat on a Navajo blanket; used a single rein, not a double; stirrups were bell-shaped or oxbow, often ornamental, and covered with tapaderos--a leather covering over the front of the stirrup with flaps that extended 28 inches or more below the stirrup.

Dress: chaps were knee length, not full length; boots were high heel, not flat; hat (hard to tell in the photo, but you can see this is a rolled brim) was flat crowned and flat brimmed; wore a "dress, suit-style" vest with a silk back and buttoned front, and a kerchief. 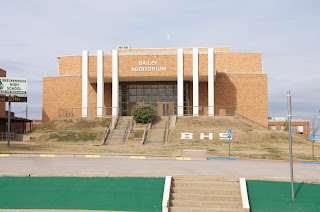 Although this is not the auditorium in which he performed, the April 14, 1955 Breckenridge American reported of Elvis Presley:


In a pink Cadillac he blew into town and appeared before a near capacity crowd of teenagers and adults at the Breckenridge High School Auditorium Wednesday night.

As usual, "girls swooned" and their boyfriends complained.
Posted by Suzassippi at 11:51 AM