It always turns out the way it turns out

We were back in Riverside Monday afternoon for another activity.  I think they were a little disappointed in several things that had occurred in their group work over the semester.  I was thinking last night after the activity, though, how things always turn out the way they turn out, and how important it was that this group experienced what it did.  I suppose that is much easier to do as many years as I have been doing this work, but nonetheless, I can see the value in the outcome that they achieved. 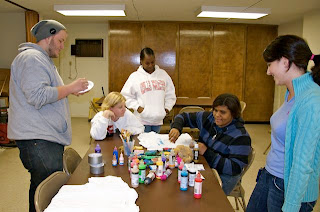 We arrived and the group began to set up for the activity, which was painting tee shirts.  They had worked hard to try to obtain donated tee shirts, but were unable to do so in time for the activity.  Farah's father graciously donated them for the group.  Thanks and much appreciation, Farah's dad!
Only a few children got off the school bus--in contrast to the usual crowd of them who wash down the hill like the surf on a normal day.  It was a cold and overcast day, and the group's spirits seemed to match the day at 3:30.  When normally we are overflowing with children, we did not yet have any.
Shortly after, though, they began to trickle in.  Moms came home from work and dropped off a couple, others walked up with a few friends in tow, and by 4, we had a small group around the table, selecting colors, stamps, and brushes to paint their shirts.
In came one little boy and asked, "Will you help me with my homework first?" 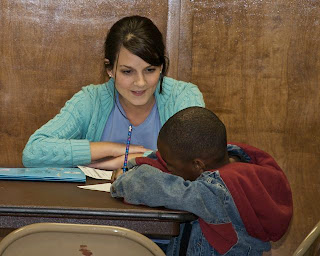 Farah took him to a vacant table and began to assist him with math.  This is an outcome that never would have happened if (a) the group had been able to carry through their original plan, or (b) they had joined the group who were there Saturday, or (c) they had gone the first time they wanted to when I would not permit it, as it would interfere with the group who had planned their activity there originally.  It was a perfect example of things always turn out.
When we first started our work at Riverside, we always helped with homework first.  Pre-schoolers did "homework" too, as we worked on letters, numbers, counting games, or read stories to them while the older kids did homework.  Then we all switched to fun activities.  To encourage a child with homework, and to help him love learning and doing well and being successful in school is about one of the most important things I think we can do for children.  It is the abysmal school failure rates in Mississippi and Lafayette county that prompted our initial work in Riverside.  While black and white children start out in first grade with comparable reading skills, that figure begins to drop by third grade.  By 7th grade, while 66% of white children are still reading at an acceptable level, less than 20% of black children are.  That statistic is unacceptable--or at least, it should be. 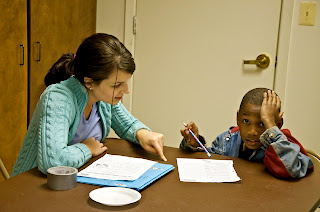 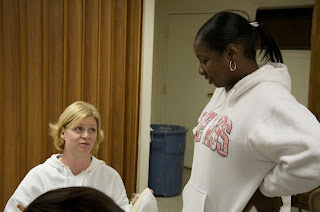 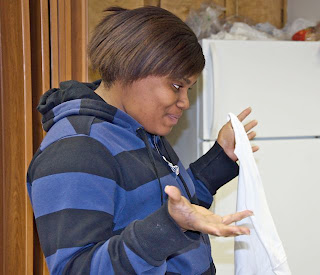 The purpose of the activity as planned by the group was expressive painting.  Anyone who has ever worked with children knows you just have to give them paper and a marker, paints, crayon, or pencil and they will happily draw and color.  Instead of paper, we had given them tee shirts.  Encouraging creativity in art help to foster follow through, and enhance critical thinking.  The very fact that we had fewer children meant they got more one on one attention and interaction.  That was another thing that "turned out" that could not have happened in a larger group. 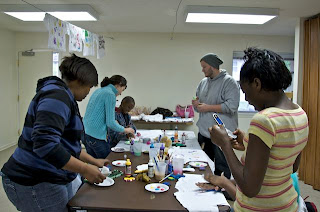 One of the things that means the most to children is time and attention from caring adults.  They would not have cared what the activity was: it did not matter if it was painting tee shirts or drawing on a paper plate.  What matters to them is someone spending time with them, encouraging them, acknowledging them, praising their efforts, and letting them contribute. 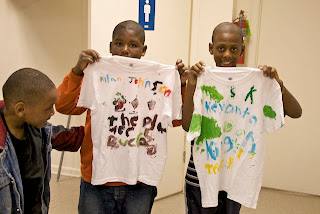 One little girl wanted to help me wash sponges after we were finished painting.  The simple act of allowing her to help clean up encourages responsibility and sharing.  An outcome that would not have been likely to happen in a larger group. 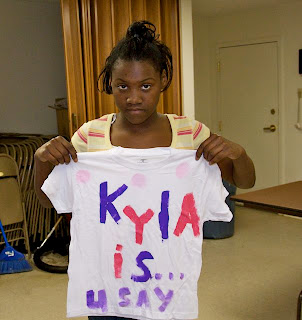 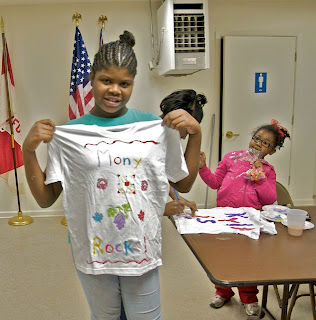 At one point, someone asked B if he wanted to go paint his tee shirt yet.  He replied, "I'd rather finish this [his homework] first."  Imagine if we could nurture that in all our children!  When he finished his math and put his folder away, Tatum and Farah helped him finish his shirt as most of the kids were finished by then and having a snack.
We all finished the clean up just as my favorite police officer Greg stopped by.  He asked if we were back, as he had heard we had been there Saturday.  I told him we were going to be coming back at least 2 or 3 times a semester for a while, and he was pleased to hear it.
This community has so welcomed me and the students in my class since we first started going there.  They have allowed us to contribute to them and their children; many students have told me how much it meant to them, so I know it is a mutual interaction for us and for the community.
I know for some of the students it is just about doing something to get it over with and get a grade, but for many of them, I know it is about their passion for making a difference in the world.  Having been doing this for so long now, I can see how even little things make a difference.  When we have not been there for weeks or even months sometimes, the fact that the children continue to show up and want to participate, that they hug us and enjoy themselves in even simple things like cookies and juice tells me how much of a difference it does make.
Someday, some of these children might say "You know, I don't remember their names, but these students from Ole Miss used to come to the apartment complex where I grew up and do stuff with us."  If they do, then we will have made a difference, whether we ever know about it or not.  It may be another seed that we never know will take hold, sprout, root and grow.  That part may belong to someone else.  One thing we can know, though, is if we do not plant, no one will ever reap. 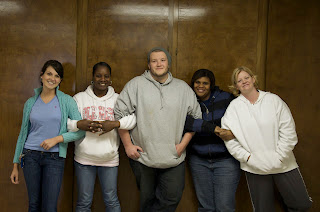 "It turns out the way it turns out."  A perfect example of interaction and mutual aid in action.
Posted by Suzassippi at 2:55 PM