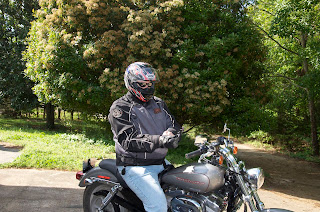 Today was the big day: off to Memphis to pick up Rando's new Harley.  Last day in the saddle of the Sportster;  armor on and ready to ride. 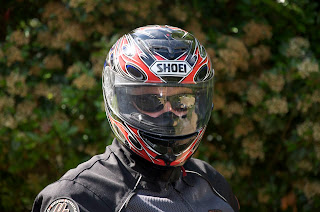 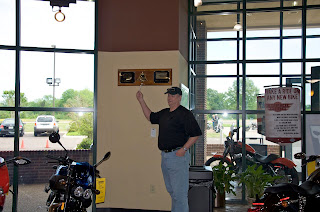 They had all the paper work ready and 5 minutes later, Rando rang the bell signaling purchase of a new Harley.  Everyone applauds and then it's back to work.  While they got the Fat Boy ready, we did a little shopping and grabbed some lunch at some hokey place called the Longhorn Steakhouse.  I relentlessly made fun of it during the entire meal, but they did have really good iced tea.  I said Gigi would have gotten a glass to go. :) 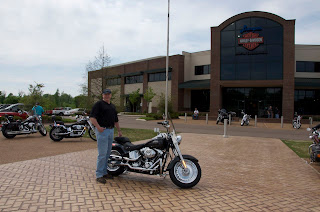 The Fat Boy Soft Tail--kind of an interesting name for a HOG, isn't it? 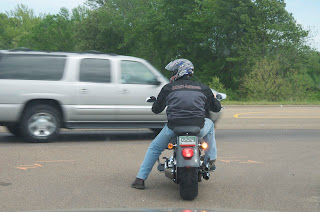 Unfortunately, by the time we headed home (an hour and a half drive) the wind was blowing worse than usual.  Randy stopped at Byhalia and took the windshield off as he said it was buffeting so badly that on a new bike that handled differently, he was not comfortable with it yet.  Although the saddle on the Fat Boy was much more comfortable and it handled well, it was still a pretty miserable trip for him.
All in all, though, a fun and pleasant day and we both enjoyed it very much.  His plans are to ride the Fat Boy to Texas in June when he goes to see his dad.  Hmmm....I wonder if he will be saying "What was I thinking by the time he hits Louisiana and is only half way there?
Posted by Suzassippi at 5:18 PM

That is a weird ass name. :) Sorry the trip home wasn't a big ole blast and I am wondering about the trip to Texas. Rather he than I, though. Rich wants to know where his Harley is and will I buy him one for his bday. Love the iced tea comment, and yes, I would have taken some to go. :)

Soft tail comes from the suspension. (I got a lesson later.) Used to they made the hard tail, which had no suspension. The soft tail has hidden suspension. I leave the origins of Fat Boy to your imagination.

I definitely think a Harley for Rich's birthday is in order for all those meals he prepares for you. I have been thinking about getting a small one for myself--so many cool back roads to ride in Mississippi--but I just don't think I am able to handle the weight of it these days.

I think you need to get a Yamaha or something smaller. Then you can sing "On the road again" as you cruise along. LOL!

I rented a Fat Boy on Maui one time and loved it - and believe me, when I'm sitting on a motorcycle the Fat Boy Soft Tail name seems like the most natural in the world to the casual observer!

A great bike for anyone is a Yamaha V-Star 650 - they look great, they are shaft drive, amazingly reliable, and easy to ride. I put 22,000 miles on onea few years ago, buying it new and driving it from Anchorage to Maine and back. Lots of pics on my old blog -http://northernapex63.blogspot.com/2006/08/rocky-mountain-national-park.html

I suppose hubby will steer you towards the small Sportster though!

I don't think I can manage the Sportster--his old one was too heavy for me.