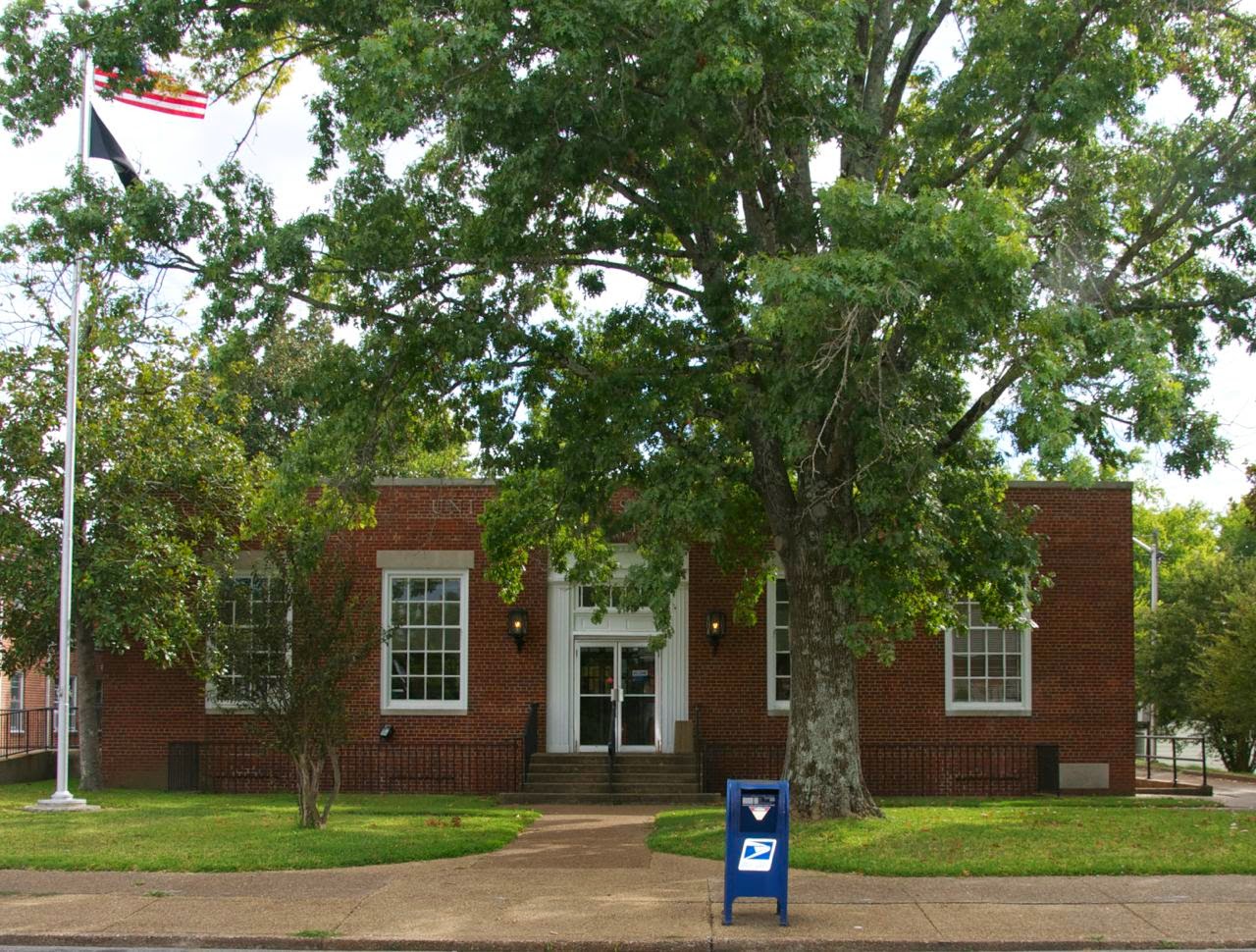 The Okolona post office was constructed in 1937 as part of FDR's New Deal Administration--one of many in Mississippi.  The Okolona building is still in use as the post office. 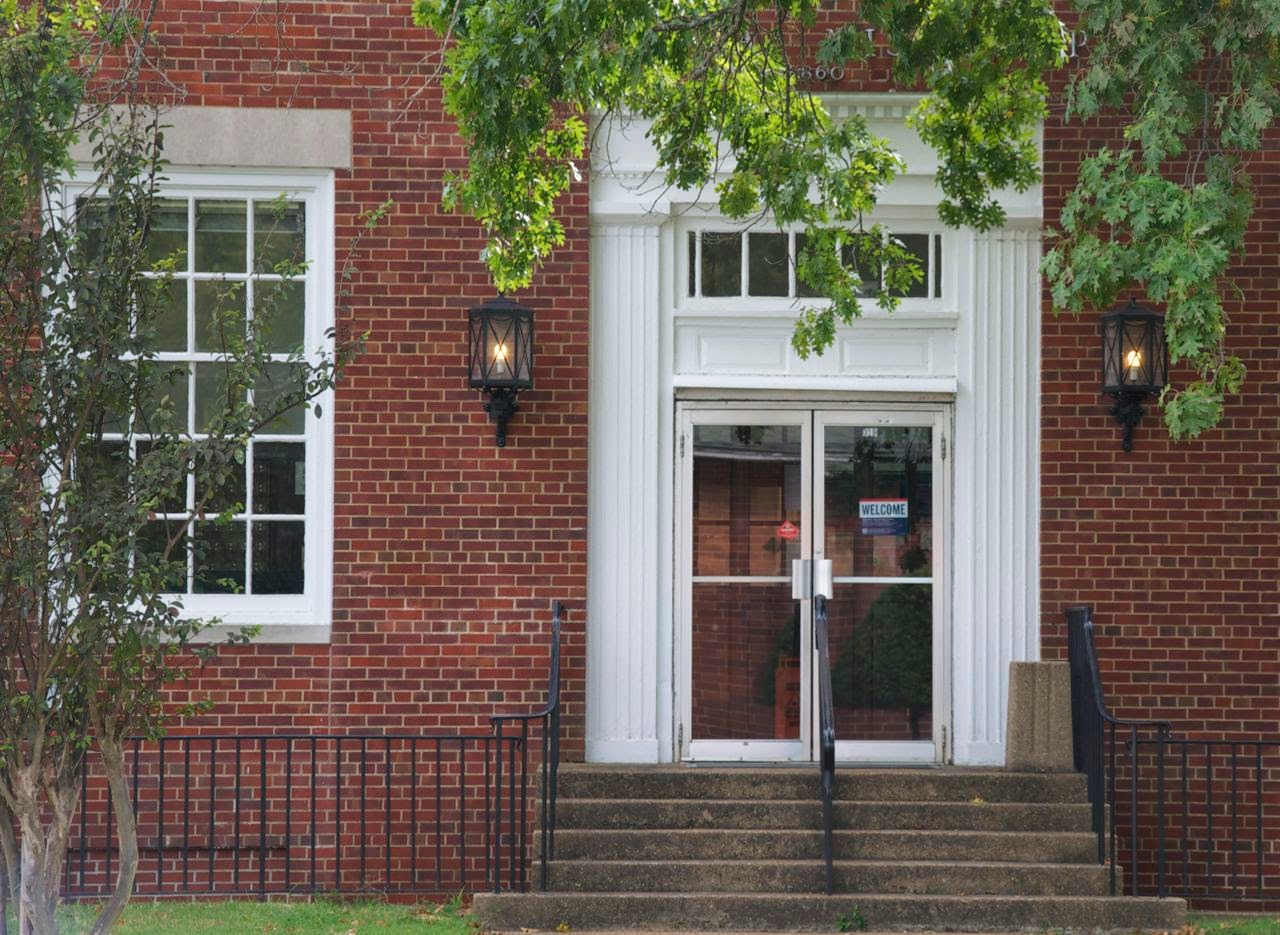 Per the National Register of Historic Places nomination form for the Okolona Historic District,


One-story + basement, brick building with rectangular plan, flat roof, and symmetrical North facing front facade. Concrete steps with iron railings lead up to the frontispiece. The frontispiece consists of metal-framed, glass double doors; stone pilasters; and is topped by a entablature with dentils. A 5-light transom sits between the pilasters. The door is flanked by two 8/12 windows with concrete lintels and sills. Concrete coping. (Shannon Criss, 5 February 2001, p. 32) 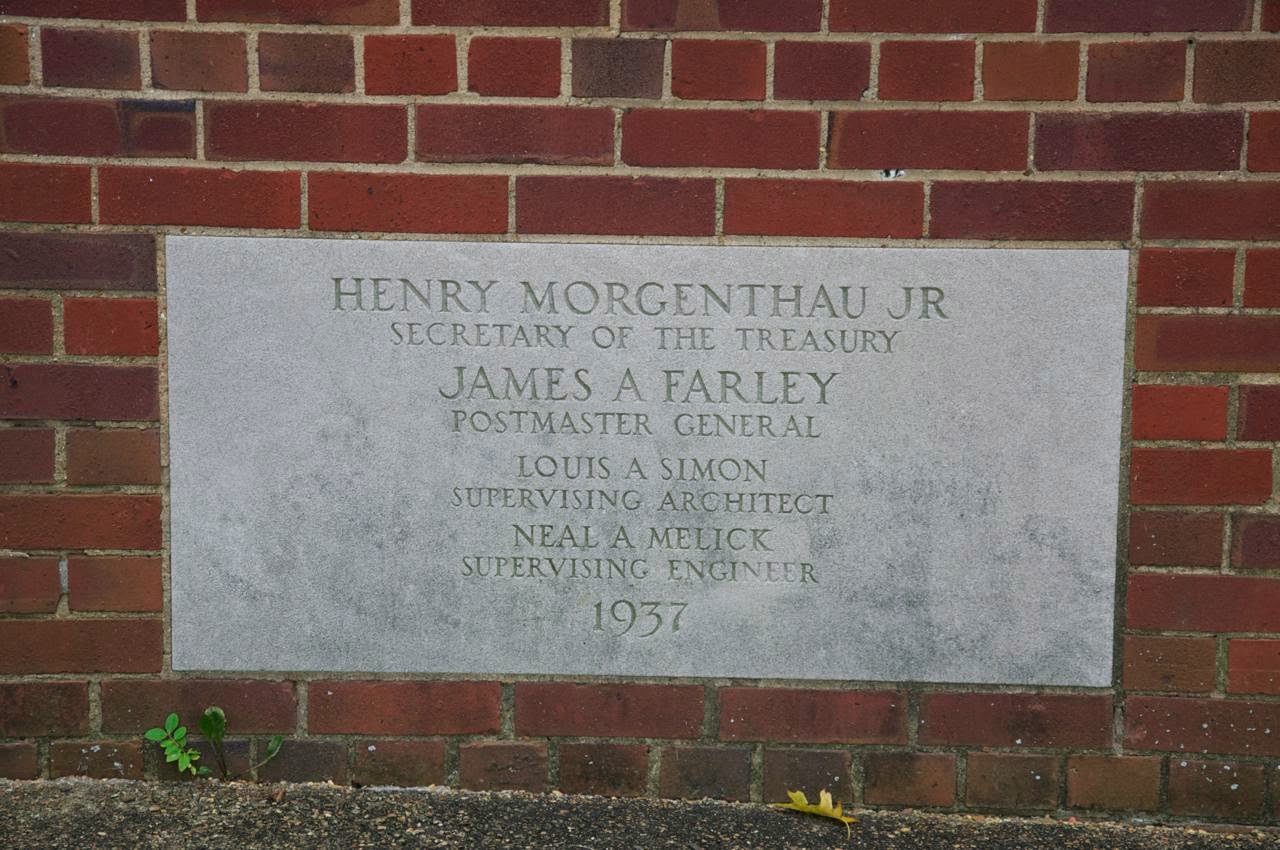 The story of the missing mural has several anecdotal explanations, although the most likely one is that the postmaster did not appreciate the "modernism" of the mural (Mark Clinton Davis, Pearl River County Historical Society, 2012).  Harold Egan's "The Richness of the Soil" was completed in 1939, and ordered painted over by the postmaster within days of its installation.

One of the most egregious episodes of outsider insensitivity involved a New York City artist named Harold Egan, who disliked historical and documentary painting and determined to make strikingly modern works for Okolona, Mississippi, and Wake Forest, North Carolina.  He did not consult either the locals or their traditions and his Richness of the Soil for Okolona (1938) featured a horizontal, semimythical female apparently lying on a riverbed with an indescribable agrarian water sprite pointing a forefinger at her misplaced left breast. (Michael Kammen. (2007). Visual Shock: A History of Art Controversies in American Culture. Vintage Books. p. 126)

I can imagine that that was not appreciated by the locals. Guess the artist was not trained on how to enter a community. :)

Well that's...different. I can see how the Post Master then could have been just a tiny bit offended and did not want to have to explain to "Mrs. Edna Mae" what it was all about.

Supposedly, sketches of designs were to be approved by local committees, but there were instances when that did not occur. The artist was not supposed to get paid until the postmaster approved the installation. Wonder if the artist got paid? He did a similar work for North Carolina that was heavily criticized.

From the picture you showed, probably not. I can't imagine doing anything during the depression that would keep you from getting a paycheck. Maybe he was one of those independently wealthy trust-fund artists who could paint and didn't need the money.

Egan also painted a mural for the Okolona College. I have a copy of the Post Office Mural that he did at the same time.

He got paid. But according to Byron Leslie Burford Jr., the commission they received from the Government was just enough to cover room, board, and supplies to install the mural. The first round of murals were selected via competitions. The later rounds were all pre-approved in D.C. Egan's first design was rejected. It was a full nude. He draped the navel and it was approved. The Postmaster had no say in the matter other than to paint over the mural the moment Egan was finished. The painting is still on the wall, as Egan unlike some other artists, painted directly onto the wall. Perhaps one day someone will invest the time and money to slowly peal back decades of layers of paint to uncover the mural. Egan's otehr mural in Okolona at the Okolona College unfortunately is lost with the buildings of that institution.

Thank you for the updates, Jonathan. Sorry for the late response, but I have been traveling without Internet--doing a bit more New Deal research.