Yes, it's been really busy the last couple of days!  I extended my stay two more days as there were still a few things Sis and I had not gotten accomplished yet.  Our evening caregiver is gone, and with a night shift vacancy, it means double time, so an extra pair of hands is helpful.  Not to mention that Sis and I have a lot of fun together and it helps to share the workload.

So, about those selfies: I saw a tee-shirt yesterday that said "Selfies: Because no one else wants to take your picture."  I had to laugh.  I mean, really, has the selfie craze not gone completely wild?  Sure, folks have always taken self-portraits, but it used to be a lot harder, and therefore, less ubiquitous. 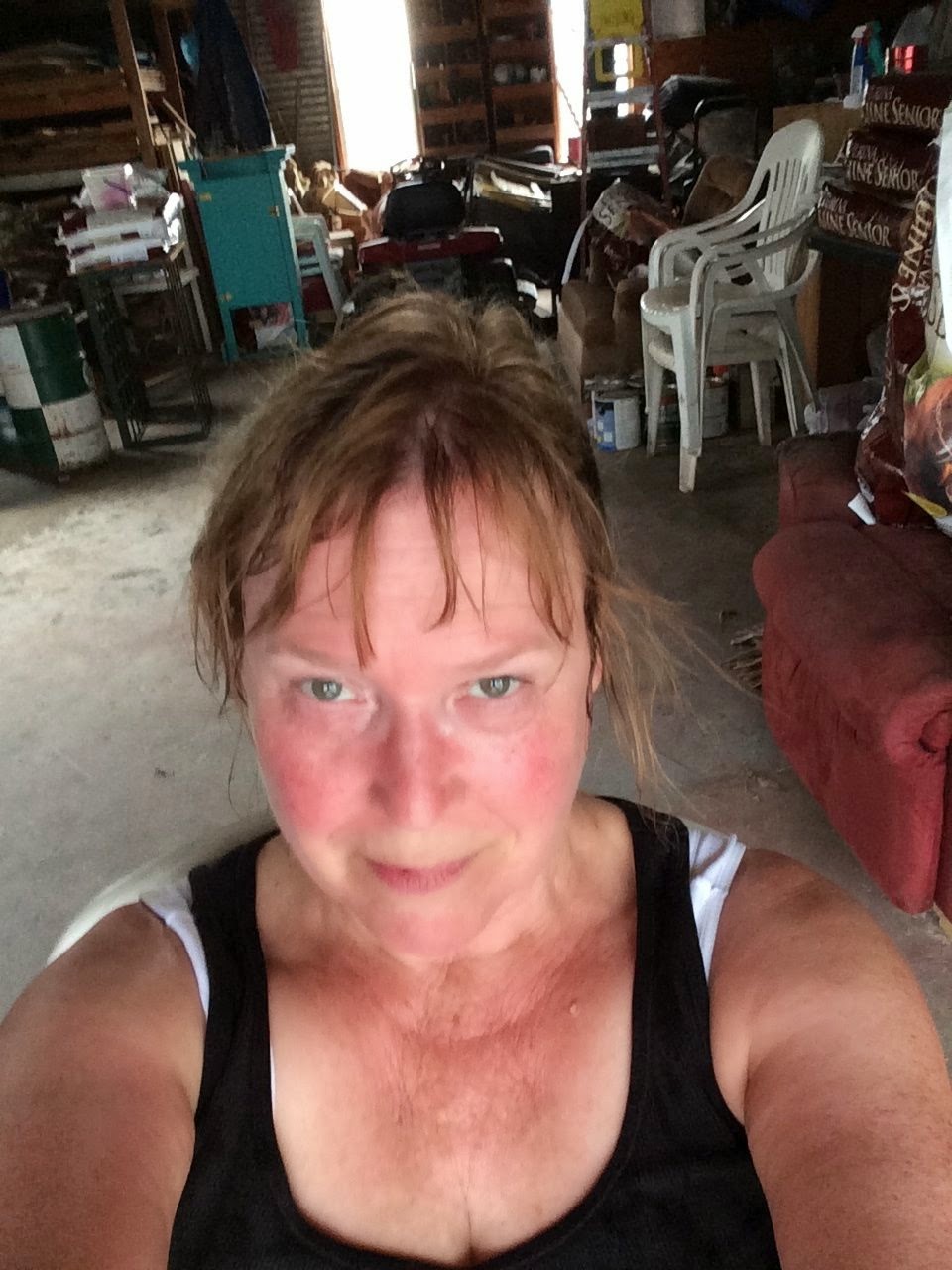 So, here I am competing with J Lo's posting last night of herself sans makeup and hair in a pony tail.  Except I had been cleaning out a horse trough, and then it started raining on me.  Sunday afternoon, when I thought I was leaving for home Monday morning, I finally forced myself to get out there and start bailing water and scrub the water trough.  It ain't easy. 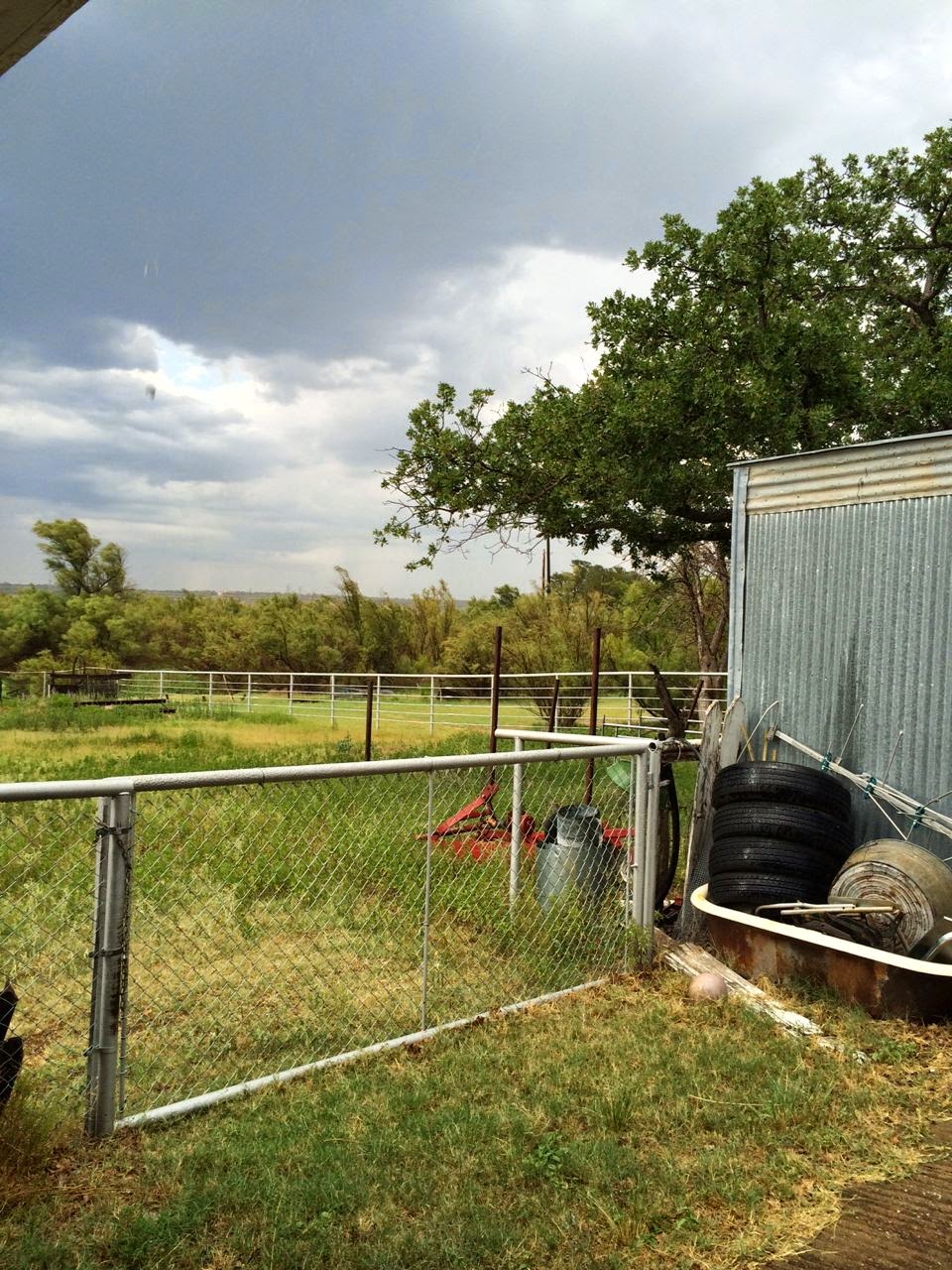 Just as I was finishing up and starting to refill the water, the clouds that had been building actually delivered, and it began to rain.  I stood in it.  I pulled up a chair and sat in the shop with the overhead door open, watching it pour, listening to the sound of music--the rain hitting the tin roof.  I went outside again and stood in it.  I walked up to the house in it.  I went to the back bedroom and sat on the bed, watching it rain through the screen door, listening to the sound of it hitting the tin roof of the carport.  It thundered, and rained, and rained and thundered.  Joyous! 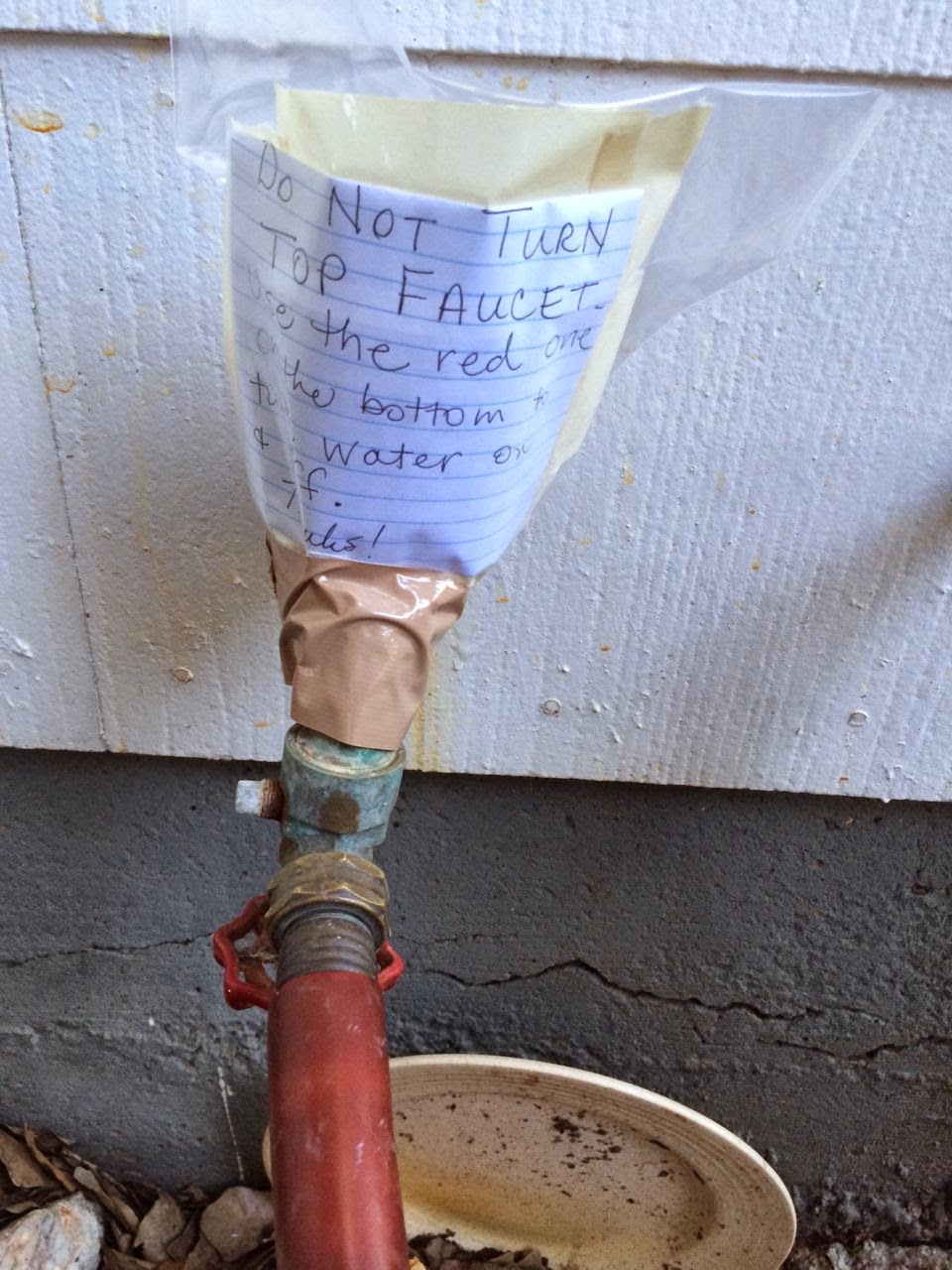 I decided late Sunday, about bedtime, to stay over.  Among the things that needed doing was repairing a leak in the shower faucet, and one in the outside faucet.  The plumber came out yesterday, looked at it and said, "Man, I hate to start messing with that."  I understand, as does anyone who lives in an old house with metal pipes.  You fix one spot, you are likely to cause a problem somewhere else.  Fittings get corroded.  That is why this faucet has a second faucet underneath.  When I was here last summer, the top faucet was turned on, and left on, and the bottom faucet was used to turn the water on and off when needed.  It is a common fix.  Somehow, with all the caregivers coming and going, instructions got misunderstood, or forgotten, or not transferred.  At any rate, people had been using the top faucet to turn on and off...and it no longer could do that due to the internal fittings loosening.  The result was a pretty good sized leak when the water was turned on to fill the water trough, and a drip when it was off.  Not good in a drought.

I mentioned it to Sis and that we had to get that fixed now.  The plumber said to do what we had been doing a year ago: turn on the top faucet all the way, which opened things up and allowed enough water to flow through that it did not leak, and use the bottom faucet.  My grandma came out in me, and I came up with a way to ensure the caregivers--in the event of changes or forgetfulness--would not use that top faucet again.  Underneath my note that says not to do it, I taped the bottom half of a water bottle over the faucet, so you cannot use it unless you went to all the effort to take the plastic bottle off.  Just in case someone could not make the leap from "faucet has a bottle on top of it, taped to the pipe, I can't reach it so I must not be able to use it" I added the note inside a plastic bag and taped it up a bit more.  Cheesh--was no one raised in the country around here besides me? 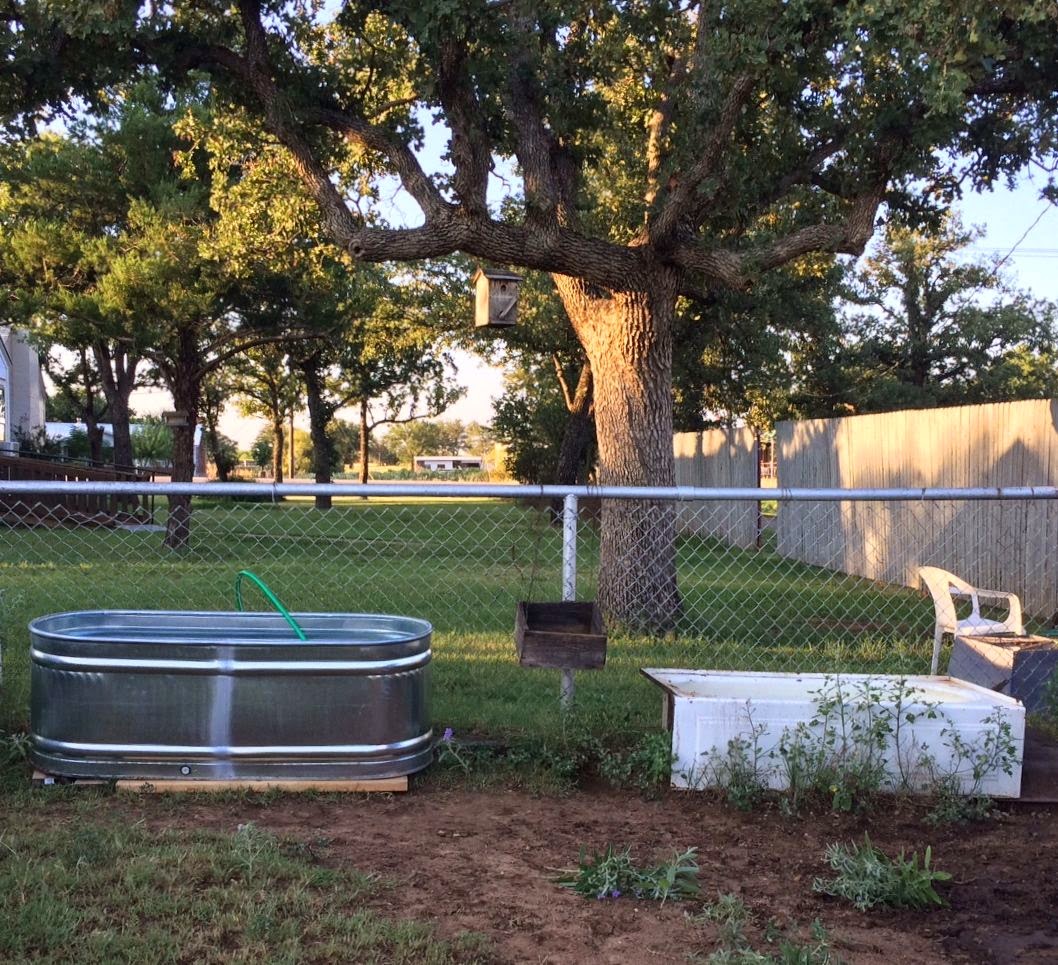 Meanwhile, Monday morning when I went out to feed, I came back in the house and told Sis that half of the water in the trough had leaked out overnight.  Also not a good thing in a drought.  Regular readers know that Dad made a water trough from an old cast iron bathtub.  He grew up during the Great Depression, and he continued to re-use and make-do all his life.  He plugged the drain with some kind of contraption, and it has worked fine since 1982, but something apparently came loose when I was cleaning it out Sunday, and it is impossible to repair without turning the tub over, which I cannot do even with help.  Sis and I decided it was high time to just get a water trough that was intended to be a water trough.  She had to go to Wichita Falls yesterday, and just stopped by to pick one up. 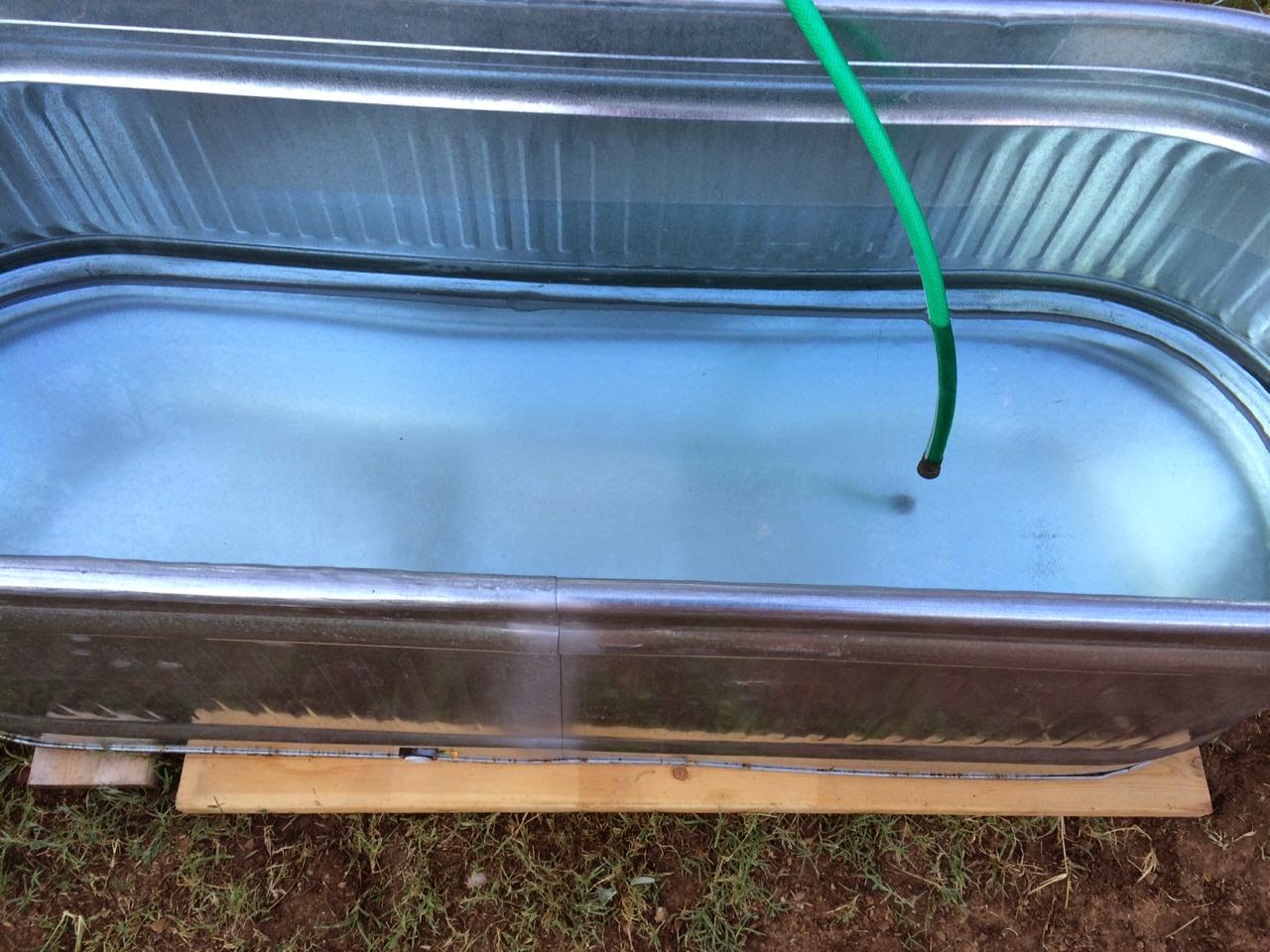 This morning, we unloaded it from her SUV and set it up.  It has a real drain, with a securely attached plug, is fairly light when empty, and hopefully, will not permit algae to grow.  If so and it has to be cleaned, instead of bailing water out, we can just open the plug, let it drain, tip the trough, and then refill.  Heaven, I'm in horse water trough heaven. 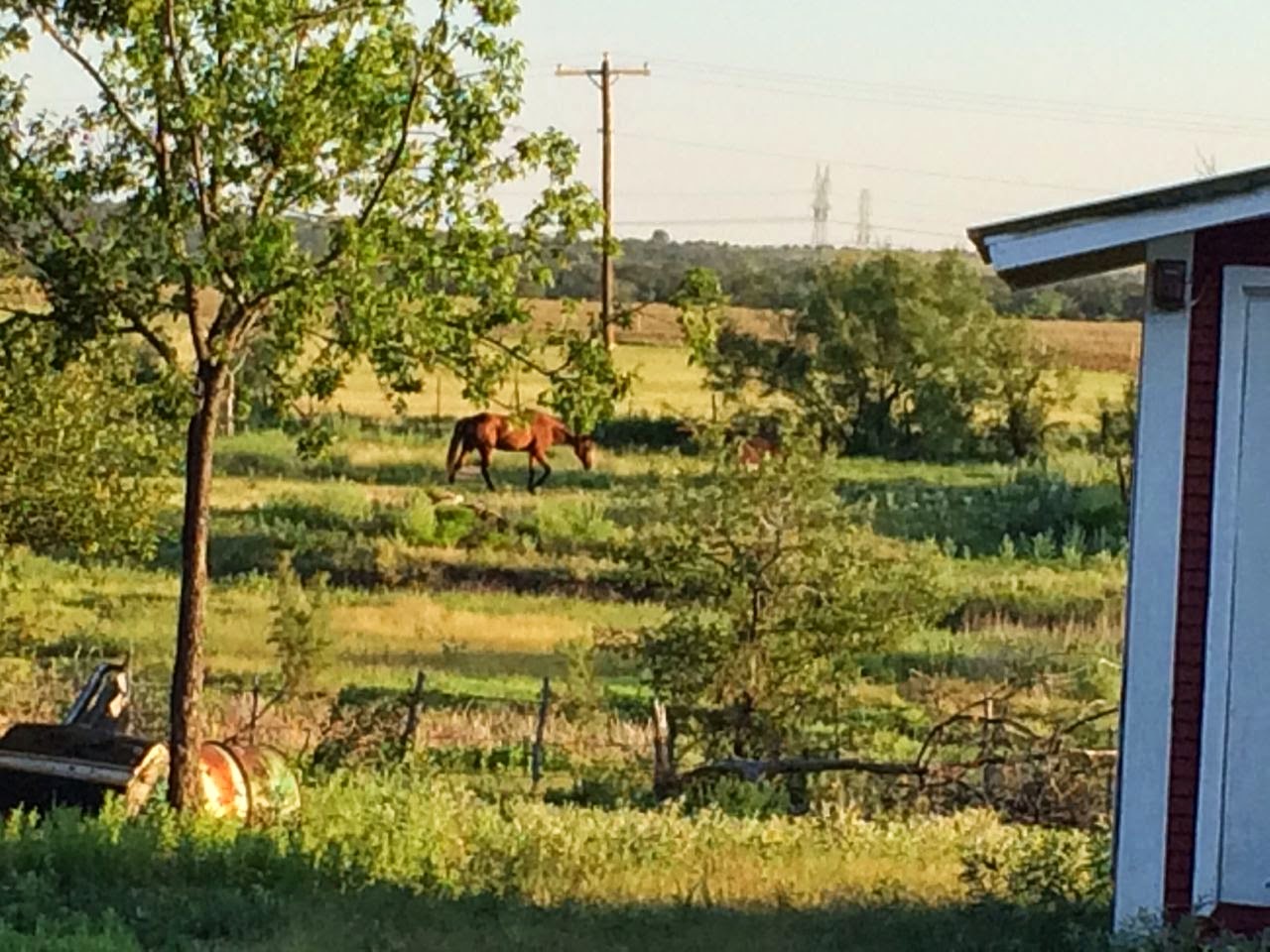 We waited until Rio and Jenny went out to the pasture after they ate to do it, so I don't yet know how they like it.  I do know that it sure meets with my approval.
Posted by Suzassippi at 8:55 AM

LOL! Now that you can just drain the water trough to clean it you will have lots of "free time"! But seriously I've always been intrigued about the ingenuity of the Depression era people, we need some of it now.

I know--just think with all the extra time now, I will be able to finish cleaning the barn...

Our calf pen still has an old bathtub as a water trough. My dad makes all his own feeders too. He find a tank, cuts it in half, adds some legs and ta da! He grew up spending lots of time with his grandparents who married at the height of the Great Depression and farmed their entire lives. They were what young hipsters would call subsistence farmers or homesteaders today. It's amazing the things my Great Grandmother could come up with to fix things and get by.

Kudos to your dad!