Knowledge, Citizenship, Industry: It's Back to School 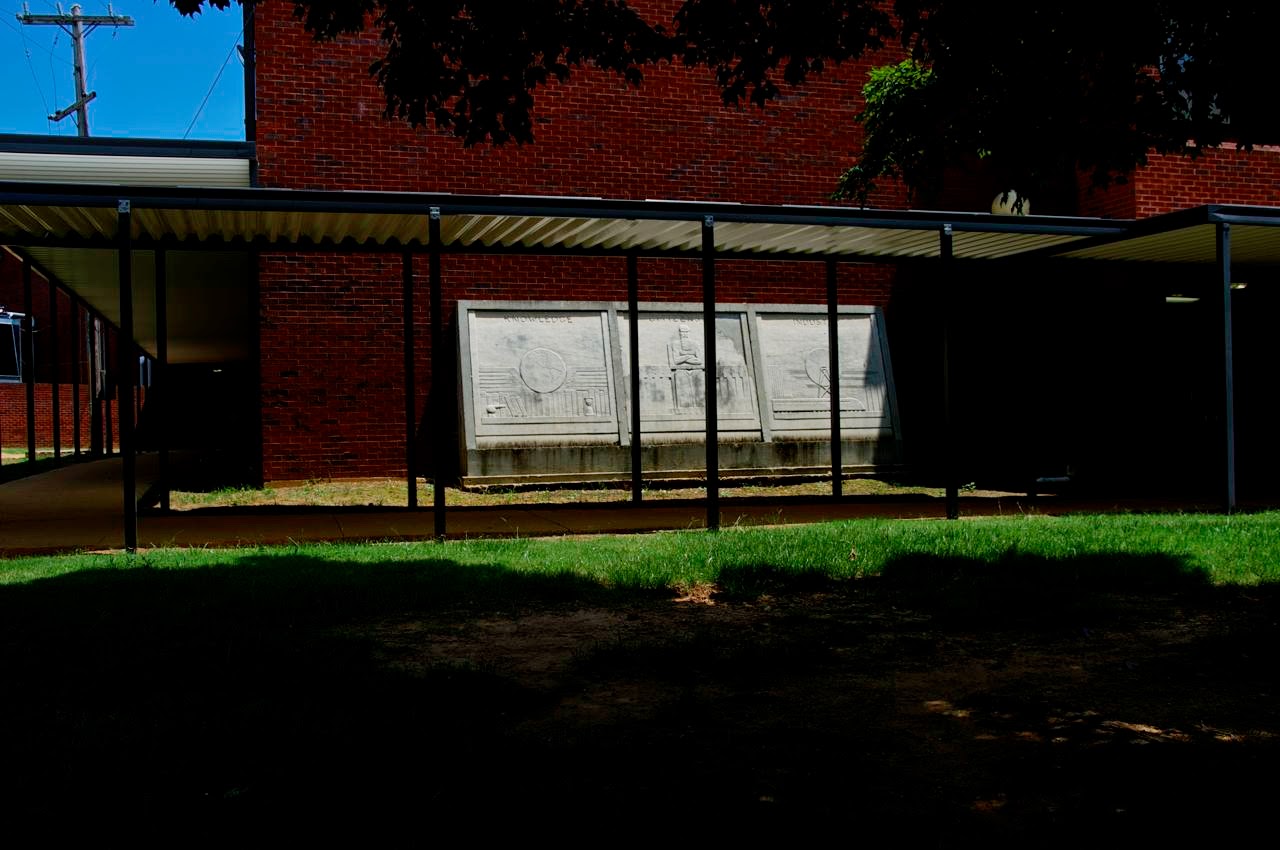 A few weeks ago, I was over in New Albany to see a friend and she took me around to some of the historic school buildings in the area.  She recalled her mother saying something about a WPA gym built there during the depression, but we could not locate it.  The relief panel that was formerly on the front of the high school building has been moved to the back of this building, where it sits in the shadows.  The reliefs remind me somewhat of those at Senatobia High School--where they still proudly adorn the front of the building. 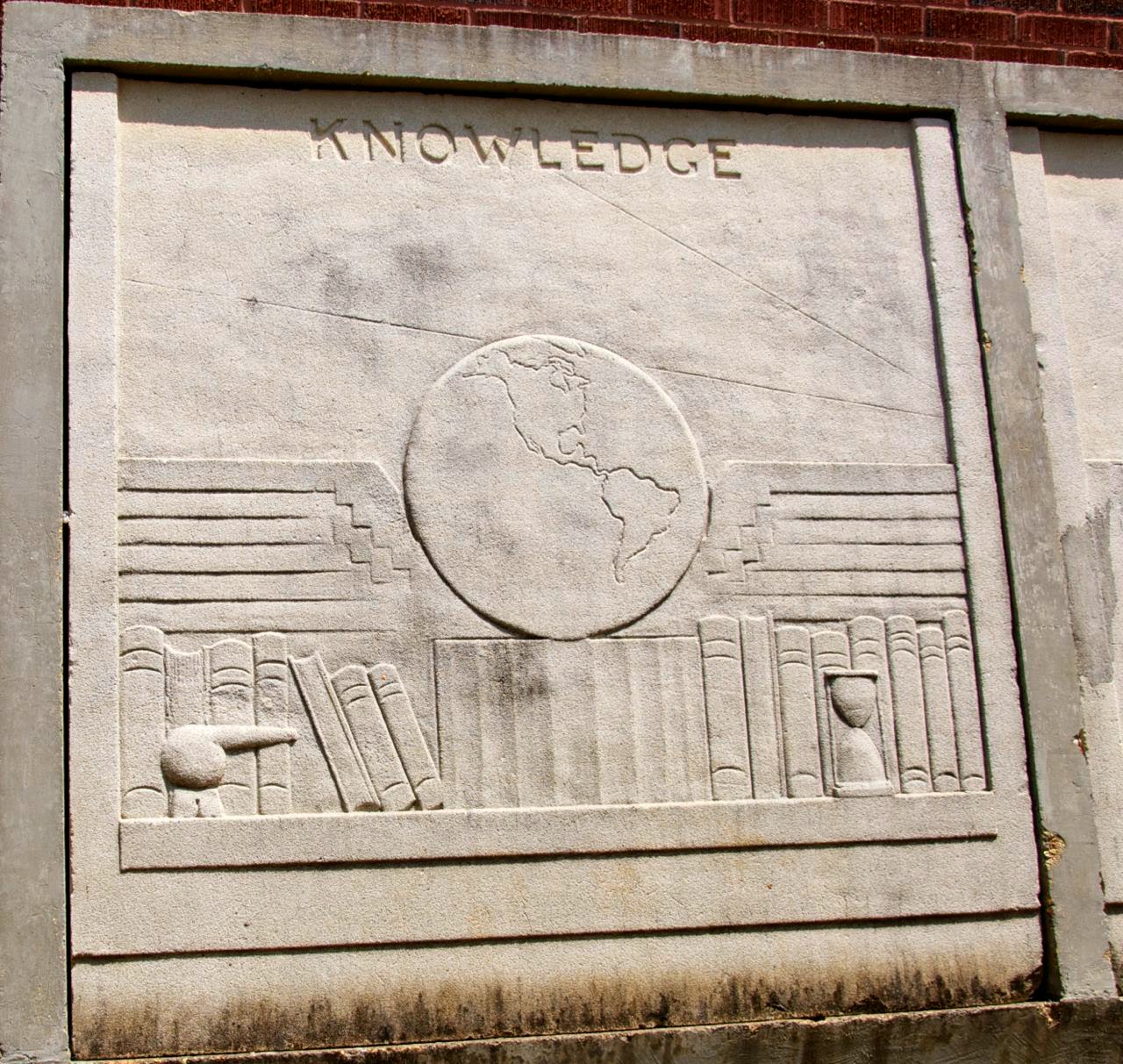 Edgar L. Malvaney designed the New Albany High School in 1936.  Use of the concrete bas reliefs were common during the period, as the Great Depression necessitated the use of simpler, less expensive materials in building construction and ornamentation. 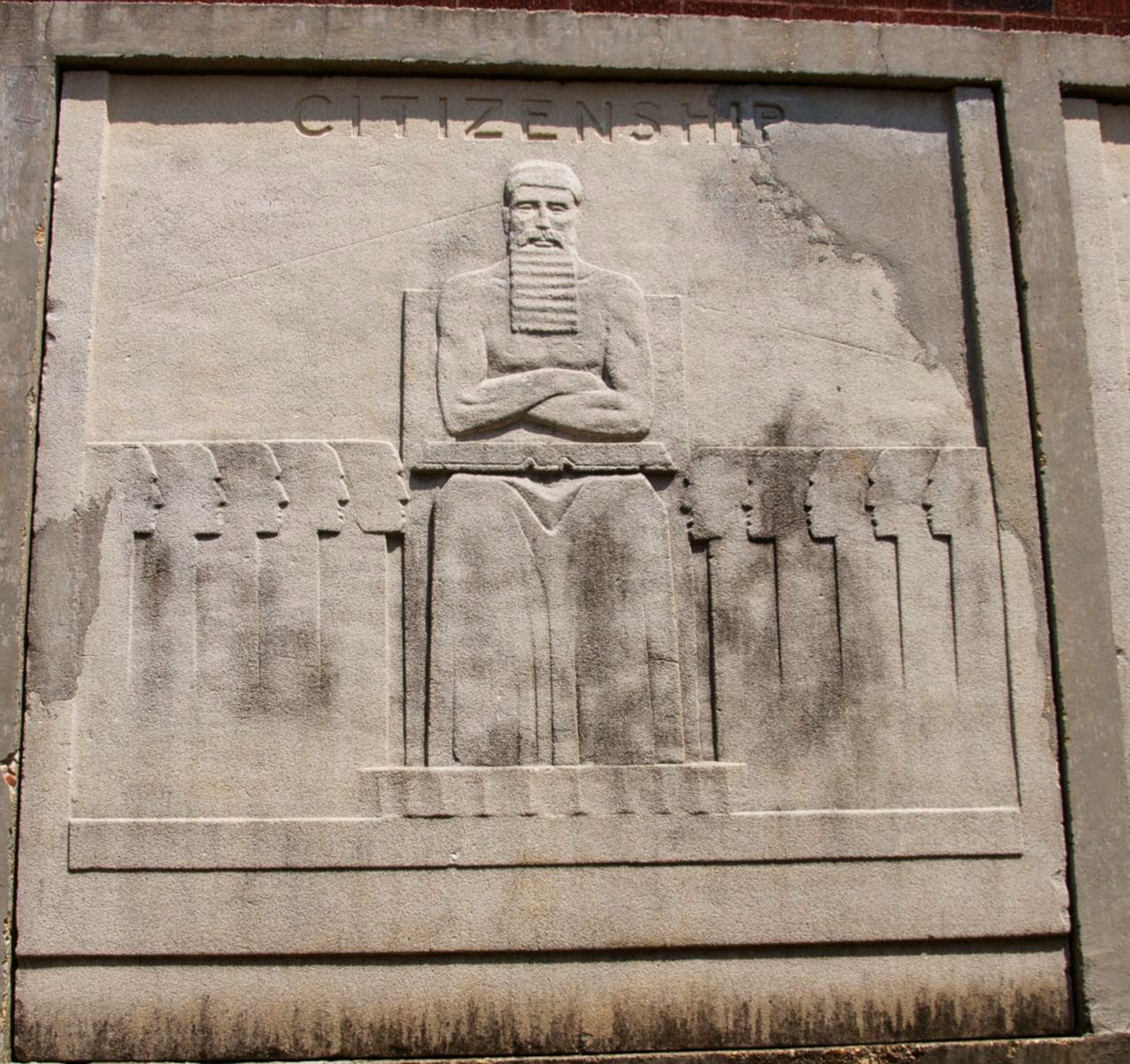 Interesting way to illustrate citizenship?  The stern and austere judge seated above the citizens who essentially have no face or body?  Citizenship as obedience and subservience?  Because reliefs were often stylized, it may have just been a standard format, but I tend to see the symbolism in everything.  Our schools were one of the institutions used to socialize us to the roles of citizen, and it would have reflected the belief that obedience is one of the more important qualities in a citizen.  Of course, obedience to an immoral or unjust law is not a trait that I value, and citizenship should challenge those injustices and set them right again.  It is just that it is a hard thing to do. 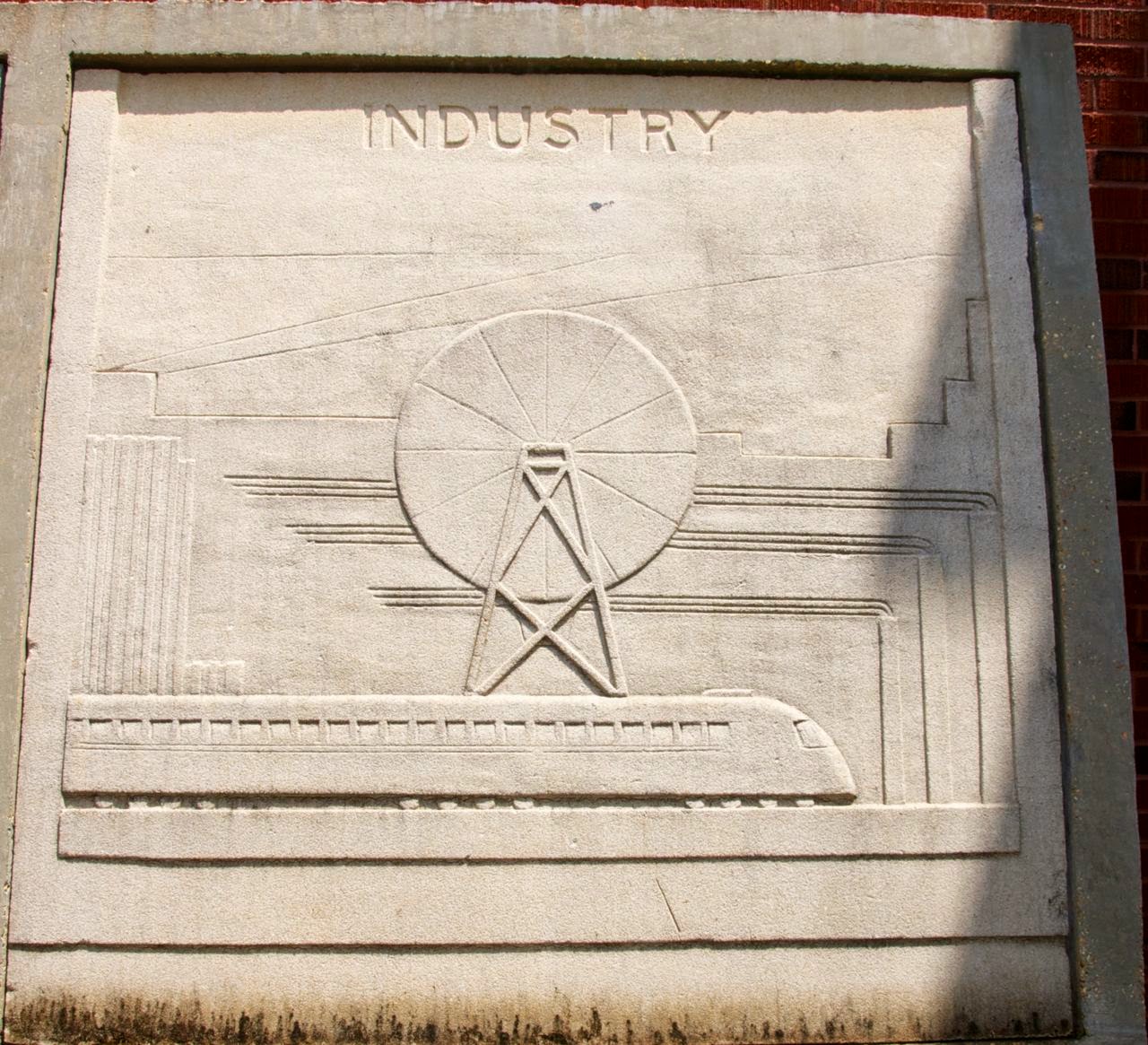 Bas relief can be designed by carving into the stone or wood, creating a raised appearance around the carved section, or precast from molds.  Molds to cast pieces required very simple designs or the concrete or other material could get caught in intricate designs that allowed the material to gather in an undercut and ruin the design (Relief in clay mold making and mold-making and casting, Vicki Lynn Wilson at Marylhurst College). 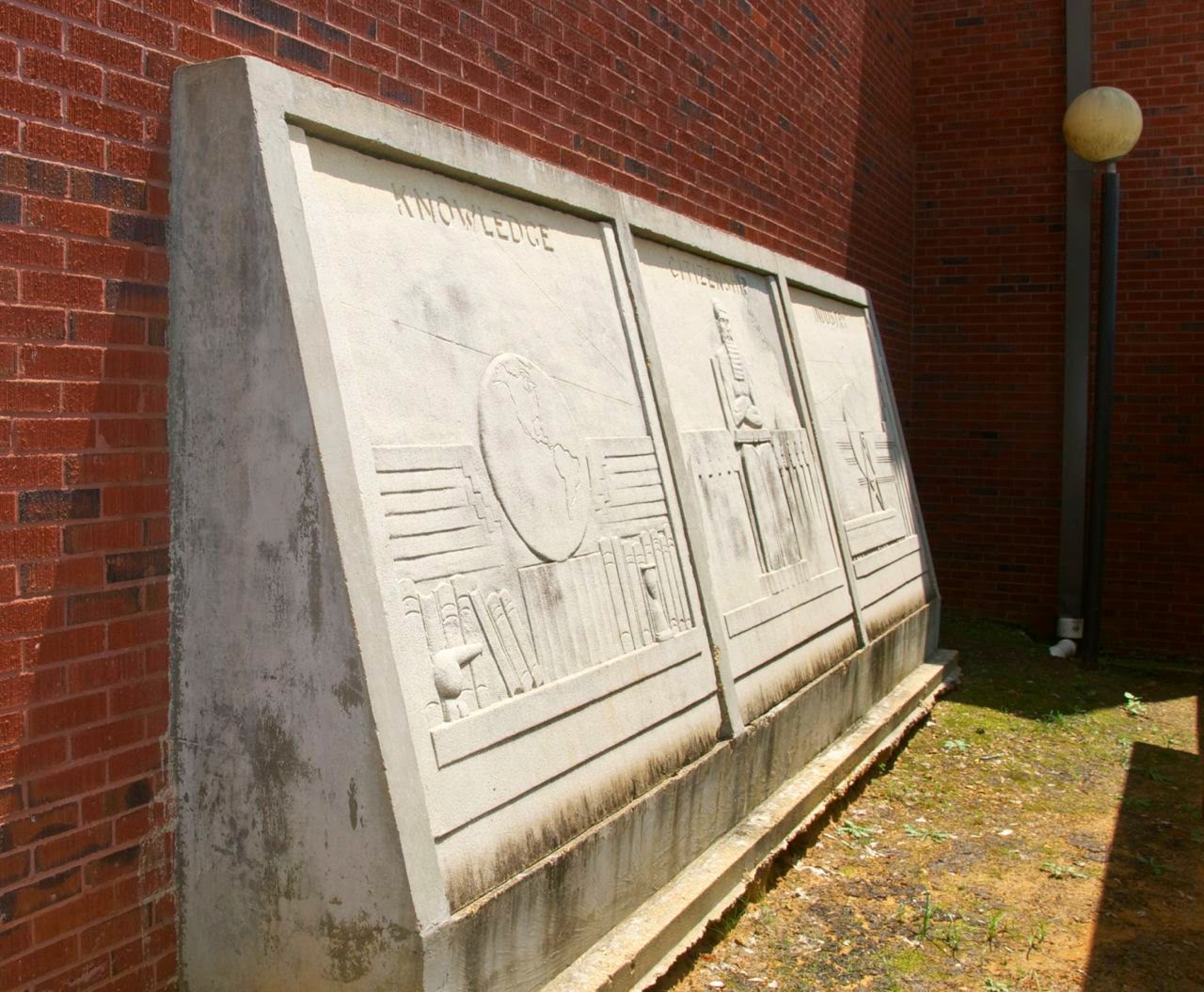 Still, it seems not fitting for the great pieces of art to be hidden at the back of a building, seen by few people.  In fact, we discovered them only accidentally.  My friend said she wanted to show me the "stones" from the old high school--I was expecting rocks!--but they were not in front of the middle school that occupies the site of the old school.  As we drove around the corner to turn around, she exclaimed "there they are!"  Hidden behind the arcade walkway, at the back of the building, in the shadows.  Maybe that is symbolic of what we have done with knowledge, citizenship, and industry.  Perhaps we only find these things, develop these abilities, and use these skills if we seek them in the unlikely places.
Posted by Suzassippi at 9:55 AM